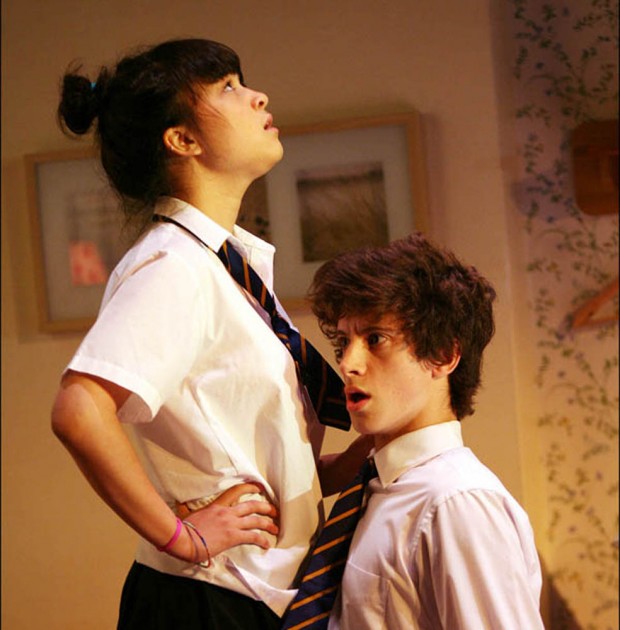 Middle-class family angst is this season’s theme at the Royal Court. And, in his new play about sex and intimacy, which opened tonight, playwright Nick Payne puts the lust in Wanderlust and creates a contemporary tale of wandering hands and wandering affections. We are in a nice suburban part of England, and the mix of pain and pleasure will be all too familiar to most audiences, whether they are teenagers who can squirm at the antics of the youngsters, or middle-aged couples who might find the more mature characters shockingly recognisable.

Alan and Joy are a professional couple who have been married for about 25 years. She’s a doctor who works as a local GP and he is head of English at a secondary school. After work, they’re both pretty tired, but is that the real reason why they find it increasingly difficult to have sex? Or is there another reason; something to do with their changing feelings for each other? Maybe. But, little do they know, they are not alone.

Under the same roof there’s Tim, their 15-year-old son. He’s simply bursting with teenage hormones and he just wants to have sex. But he’s understandably a bit preoccupied about how to do “it” — he’s a virgin, and wants to get some practice before asking out an older girl at school. In frustration, he turns to his friend Michelle, who is the same age as him, but more experienced sexually. Would she give him some tips about sexual technique perhaps? Maybe.

As in his debut, If There Is I Haven’t Found It Yet, Payne specialises in scenes of excruciating embarrassment and at tentative peeks at human foibles. His forte is sharp observation. In this play, it’s not long before the juices begin to flow, and wild moments of hilarity cuddle up to the bare cheeks of hot embarrassment. For even when maturity drops its knickers, it is no less awkward than a teenage grope. Here, as in the wider world, emotional intelligence is a quality in short supply, and love is still the strongest four-letter word.

This is a play about how desire creates anarchy all around, and about how the most unsatisfying thing is actually realising your fantasies. As ever, the sting of truth is the most painful sexually transmitted disease, and its emotional punch can leave any audience member feeling just a little bit short of breath. The result is the kind of 90-minute entertainment that can make you wince in self-recognition, and gasp in amazement.

Fluidly directed by Simon Godwin, on Robert Innes Hopkins’s set, it has a terrific cast led by Pippa Heywood — familiar from Green Wing and The Brittas Empire — as Joy, a woman who always seems as if she’s about to explode with feeling. As her edgy husband Alan, Stuart McQuarrie is thoroughly convincing, and Charles Edwards’s Stephen and Siân Brooke’s Clare are both similarly excellent. Best of all, the teens, played by Isabella Laughland and James Musgrave, convey just the right mix of seriousness and immaturity. This is a great show for the wise at heart, and for anyone who has ever been in love, or in lust.