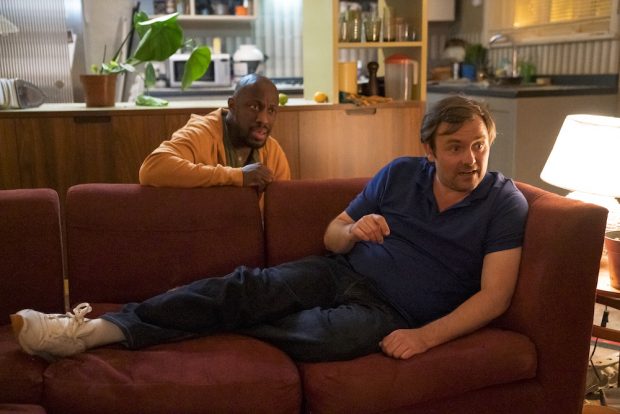 One of the absolute highpoints of new writing in the past couple of years has been the Death of England trilogy. Written by Roy Williams and Clint Dyer, these three brilliant monologues have not only explored vital questions of race and racism, identity and belonging, but have also provided a record of theatre-going before, during and after the pandemic lockdown. From the first episode, which was staged live at the National Theatre in February 2020, to the second which only had one performance but was then streamed in October 2020, to this final part, which is a film, the story of fractious best mates Michael and Delroy now reaches its terrific conclusion.

Set in Delroy’s East End flat during the January 2021 lockdown, the plot takes place some months after the previous episode in which he was late for the birth of his baby girl, due to a run-in with the police, and now, wearing a tag, lives apart from his former lover Carly, who is Michael’s sister. Williams and Dyer examine what happens when Michael, Delroy’s childhood friend, takes the baby off her hands for an afternoon and brings her to see her father. Not only are the tensions in the relationship of these old friends — due to the racism that Michael resorts to at moments of stress, but which feels like an inheritance from his father and family — brought into the open, but the two men also have to confront the violent antagonism of one of Delroy’s neighbours.

As usual, the writing is surgical in its precision and its joy. As the two men take turns to speak their narratives, serious issues about the relationship between frustrated aspirations and toxic masculinity, which result in anger often intensified by racist slurs, are balanced by jokes, although the uneasy banter between Delroy and Michael is tense — at any moment, you feel, this could escalate into physical conflict. The tendency of white people to assume the status of victims in the antagonism between racial groups is acutely discussed, and the suggestion that, following the George Floyd killing, white men feel more guilty about racism is aired and compared to the white saviour complex so common in culture and politics. At one stirring moment, Delroy complains that Michael just wants to be a hero, pointing out that true heroes should go unseen, be unsung.

Looking at his baby girl, Delroy says that he is glad that she is not a “big black boy child” because racism is a greater danger to a boy than to a girl. Is this right, or a projection of his own experiences? And since this is also a story about male friendship and masculinity, and the way that anger is one of the only acceptable ways in which men can show their emotions, the question is why is rage so acceptable, when tenderness is laughed at? After all, surely it’s okay to cry at Toy Story. Isn’t it? The awkwardness of men when it comes to child care is highlighted, and becomes an important plot point when Michael has to leave Delroy to go and get some more nappies.

The focus on Delroy allows the playwrights to tackle difficult questions about personal and national identity. In one passage, he muses on how the face of his mixed-race baby has some of the features of Alan, its mother’s racist father. How can he look at this beautiful baby and not be reminded of one side of the two families that contribute to her genes? At the same time, Delroy is brutally damaged by what you could call “lockdown psychosis”, the dark thoughts and boiling blood of isolated locked-down individuals, the feelings exacerbated in his case by house arrest. This is articulated in a brilliant monologue rant which will be a classic in years to come.

The complex strands of feeling between proud fatherhood, toxic masculinity and racial antagonism culminate in a violent confrontation with a white gang, which is eventually defused, but not before it fills the viewer with a terrible dread. (British theatre has a poor track record of protecting babies in fraught situations involving men.) Although in the end this incident is resolved with more wishful thinking than probability, it does lay the ground for an ending that is warmly conciliatory and optimistic, a great contrast with some of the savage emotions that have preceded it. Fittingly enough, the mixed-race child becomes a symbol of future hope.

Not only is Death of England: Face to Face thrillingly contemporary, it is also superbly filmed. Hamilton star Giles Terera plays Delroy with immense subtlety, sensitive to every shift in the emotional landscape, which ranges from rage to tenderness. As his exasperating friend Michael, Neil Maskell excels in the more emollient passages, although his anger is also utterly convincing. Clint Dyer directs beautifully, with the two actors also successfully impersonating the other characters in the story, from the racist dad Alan to the stressed-out mum Carly. Filmed in the Lyttelton space at the National Theatre, Sashi Kissoon’s cinematography really lifts the show.

From the visual puns that humorously highlight linguistic metaphors, to the slow motion explosion of violence, this is unashamedly a film rather than a dual theatre monologue. Dyer and Kissoon use devices such as lip synching and double shots of speaking characters to make the story visually as well as verbally exciting, with flashbacks and brief glimpses of Carly and Alan (a sadly underused Amy Newton and Phil Daniels). On the other hand, the evolving colour palette and arresting moments of filmic emphasis are stimulating in their own right. The result is a perfect tour de force of visual, intellectual and emotional pleasure — outstanding.