Polly Stenham on That Face 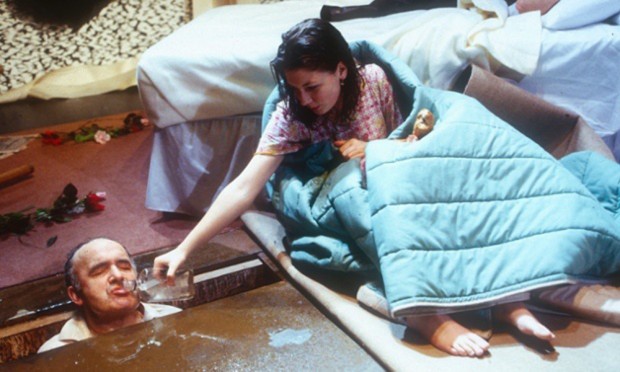 Size matters. When you put a studio play onto a much bigger main stage, it changes. A good example is Sarah Kane’s debut Blasted. In 1995, at the tiny Royal Court Theatre Upstairs (which in those days sat about 60), it seemed like a dirty shocker — intense, unsettling, hard to comprehend. By 2001, when it was revived on the Court’s main stage (with a much bigger budget and more expensive set), it seemed like a state-of-Europe play; it was much funnier and the acting was much broader. Last week, I saw it revived at the Lyric, Hammersmith, and experienced the same big-stage effect: more laughter, more distance, bigger acting. At about the same time, I went to an excellent “Once Over Drama Event” at Foyles bookshop. Playwright Polly Stenham, her director Jeremy Herrin, and actors Julian Wadham and Catherine Steadman, were discussing her debut That Face, which also made the journey across town from the attic of Sloane Square to the West End. From being an in-yer-face studio play, it grew into a much funnier mainstage drama. Stenham suggested, and I’m sure that she’s right, that in a large darkened room the audience feels safer than in a small well-lit studio where they can see each other, and that this gives people permission to relax. And to laugh. Fair enough, and I enjoyed it equally well in its big incarnation. But now, perversely perhaps, I’d really like to see Kane’s Blasted, and Stenham’s That Face, as studio shows again.