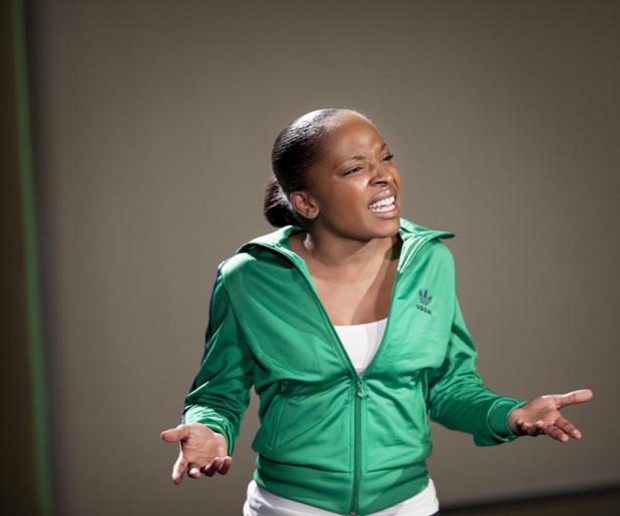 It’s common to feel a real sense of doom when you approach the Elephant and Castle Shopping Centre. But it’s not the dodgy hoodies that turn your legs to jelly, it’s the sheer ugliness of the architecture. Yes, aesthetically, this is urban hell. But it’s also the site of the Royal Court’s Local project, in which a rundown shop unit has been turned into a makeshift theatre. Random, a spirited revival of debbie tucker green’s 2008 play, is the first of a season of edgy dramas to make the trek from Sloane Square to Southwark.

Outside, a chilly wind; inside a quick frisk by a bouncer, and you’re in. The shop space is full of armchairs and sofas, as well as chairs which, oddly, are screwed to the floor (obviously, there are limits to spontaneity). But the space radiates novelty. It’s also well suited for this 50-minute monologue about a knife attack on a teenager, which, in its original version at the Court’s Sloane Square base, was performed by one actor, Nadine Marshall, on a bare stage. Here, it works just as well in this grey-box theatre, with Seroca Davis playing all the different characters.

The story is sickeningly familiar. A Sister and Brother wake up, get breakfast from their burdened Mum, and then leave: Sister goes to work, he goes to school. As Mum does the chores, Dad gets up late. By lunchtime, this scene of banal normality is shattered by the news that Brother has been killed in a random knife attack. As Sister gets an imperative message on her mobile — “Come home. Now” — the family face their loss.

The devastation of sudden death is charted with intense empathy. Because he is so obviously innocent, Brother’s knifing is not only incomprehensible, it is also an undeserved fatality: and green’s play is thus a cry of pain against the injustice of the world. But, much as you can sympathise with this, it’s hard to shake off the feeling that the playwright has loaded the dice.

From the start, this is a polemical piece which makes the assumption that young victims of knife crime are innocent — as the title states, these attacks are random. This may be true in some cases and not in others, but its use here is clearly designed as a piece of special pleading: this young man, says his teacher, has potential, and his sudden death is obviously a waste. But is this meant to suggest that other deaths are less random, more deserved?

Also, while green is clearly sympathetic to the family, her empathy doesn’t extend to either the police or the media, who come across as vultures, and completely uncaring. This strikes me as unnecessarily prejudiced: surely not all police or journalists are shitty people. That said, the play is brilliantly written, with her trademark poetic insistence and repetitive riffs tamed for once in the service of storytelling.

As Davis steps up to the plate to give us Brother, Sister, Mum and Dad’s domestic rituals as they gradually become overcome by events, you become conscious not only of her effortlessly cool acting, with the teeth-kissing and heightened gestures of the comic beginning slowly unwinding into the bleak pain of the ending, but also of the setting for this play. While the story unfolds, you can clearly hear the sounds of the shopping centre, the hum of machinery, the clanking of trolleys and the grunts of locals.

By the end of the play, it is the Sister’s voice that dominates as the playful polyphony of the opening is narrowed to the constricted tones of grief. Although Davis is completely alone, there is never any lack of clarity in the terrible tale — and she makes green’s economical text sing with the humanity of the everyday. Directed with commendable restraint and real feeling by Sasha Wares, Random gives us a brief glimpse of the emotional truth behind the depressingly familiar headlines about knife crime.