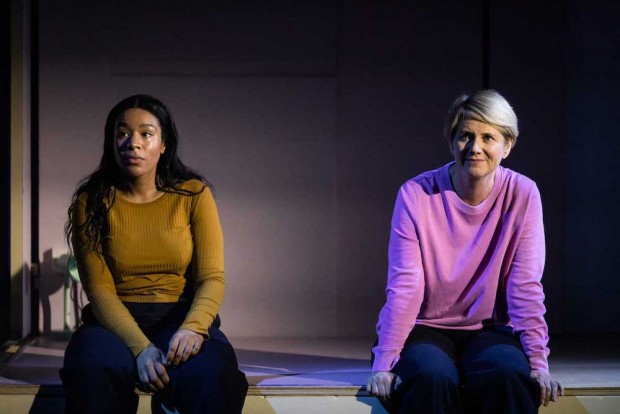 Clean Break, the theatre company that specialises in working with women in the criminal justice system, is doing a lot of celebrating. It’s the 40th anniversary of this unique female organisation and already this year they have put on a variety of shows, from Chloe Moss’s Sweatbox to the devised piece Inside Bitch. Now they are teaming up with Alice Birch, one of British theatre’s most experimental writers, to produce [Blank] at the Donmar Warehouse, which likewise is reinventing itself as a cutting-edge venue. The theme, predictably enough, is the impact of criminal justice on women and their families.

The result is an impressionistic piece made up of fragments, like a untidy pile of shattered mirror shards, reflecting flashes of social reality. The short and sharp and often strong scenes come at you thick and fast: a mother and her daughter argue about the latter’s new boyfriend; he turns out to be violent; she struggles to get herself and her kids into a shelter. Another mother is in conflict with her junkie daughter, who breaks into her house and demands money; when her mother refuses to help her, she becomes a sex worker on the street. Another mother tries to sing her child to sleep, borrowing awkwardly from Roberta Flack’s “First Time Ever I Saw Your Face”.

As the issues pile up — poor parenting, mental health problems and urban loneliness — the criminal justice system appears to be broken: even when it tries to help an imprisoned pregnant woman, by offering her a place in a mother and baby unit, it turns out that this is located a huge distance away from the children she already has. In this dark vision of troubled women everyone is imprisoned, whether they are literally incarcerated or not. In a show in which some scenes are just seconds long, everywhere you look you see solitary women and lost children. A long deep shadow of damage pervades the whole evening, with the threat of suicide ever present.

This experimental show is highly collaborative: Birch has written a 516-page playtext which is heavy enough to break your toe if you let it slip out of your hand. It comprises 100 scenes of various lengths, from snapshots to longer pieces, and parts of it were first performed as part of the National Theatre’s annual Connections youth theatre fest in June 2018, when it had 60 short scenes for theatre-makers to choose from. Now, Birch along with director Maria Aberg have chosen to stage 22 scenarios, and Aberg works hard to give the show some coherence. She joins up some of the fragments to create a better sense of a unity of experience. The longest scene, called “Dinner Party”, lasts some 40 minutes and switches focus to middle-class pretensions and white-collar crime: snorting cocaine.

Here Birch’s satirical gifts are on full display. Lesbian couples and female friends are having a meal, and Kate, a young lawyer, has brought her new lover, Shona, a teacher, to meet her friendship circle. With its overlapping dialogues the scene is reminiscent of Caryl Churchill’s more original opening to Top Girls, and in fact [Blank] as a whole has clearly been deeply influenced by Churchill’s Love and Information. There are some good jokes about the food favoured by the professional middle-classes, and a touch of snobbery in some of the exchanges. Shona’s job is referred to with a patronizing glance by another guest who is a head teacher. Drugs are delivered by a courier who could be Deliveroo. Then the tensions between the women climax in Shona denouncing all of them for, despite their liberal pretentions, “making the world worse”.

While several of the short scenes are either powerful or heartbreaking, I have to say that much of this just got on my nerves. A lot of the creative energy has gone into the experimental form of the play, leaving little thought for the content. There’s no story here, no drama, no arc. No new insights; no fresh perspectives. Watching the play you would be forgiven for thinking that all women who are caught up in the criminal justice system are hopeless cases — and surely that isn’t true. Is it? It’s also a bit rich for the liberal playwright to attack liberal middle-class professionals for being inauthentic and then burden her working-class characters with poetic speeches, metaphorical declamations and artificial verbal ticks. Such playwriting is self-conscious and unconvincing. And although the large cast is wonderfully diverse, the dialogues have no individual flavour: everyone speaks like everyone else.

This kind of playwriting also lacks variety in its representation of women. All the characters have the same voice and the same identity: that of victimhood. Okay, some lament and some shout, but the message is the same. I know that some women really are victims, but to represent all women as equally victimised seems not only dispiriting, but also politically reactionary. If true, what hope could there be? Is it responsible for a company such as Clean Break to propagate this image of women? The play endlessly repeats the same mantra: woman hands down misery to woman, mothers fail their daughters who go on to fail their daughters too. And so on. It’s a counsel of despair. That said, the cast are extraordinarily precise and taut in their acting.

Lasting almost two hours without a break, [Blank] has a huge versatile set by designer Rosie Elnile, which is a great high-definition backdrop, helped by lots of visual effects, to the performances: it’s hard to single out individuals in what is essentially an ensemble piece with a dozen actors, but I really liked Jackie Clune and Thusitha Jayasundera as exasperated mothers, Shona Babayemi as a truth-telling party guest, Zainab Hasan as an agonized addict and Kate O’Flynn as an angry daughter. Even this appreciation feels inadequate: each actor plays several different roles. But however powerful and committed the performances, the result is both depressing and politically questionable.