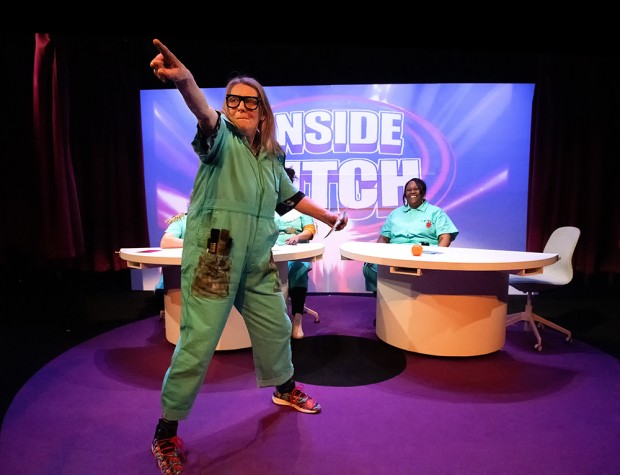 Dear Clean Break, Thank you very much for your latest, called Inside Bitch, a show which is billed as “a playfully subversive take on the representation of women in prison”. It’s a great celebration of your 40th anniversary. I saw it at the Royal Court tonight and I will remember it because the cast were clearly having great fun, and so was the audience. And I could see why. Some bits were really funny — and I couldn’t help myself: I laughed too — which is all a bit weird because the subject of prison, and the incarceration of women, is really no laughing matter. In fact, *spoiler alert*, this is exactly how the show ends: when a group of women who have all been to prison are asked to talk about the funniest moments of their experience their response is a long silence.

Still, the show is a laugh. It has to be admitted. And I reckon that is because your directors, Stacey Gregg and Deborah Pearson, have decided to produce a devised piece of theatre in which the participants, four members of the Clean Break Company, have had equal input. Together they have decided to write not a straight prison drama, but to create a show about creating a show, the fictional television series called Inside Bitch (great title by the way). The reason for this is obvious: women with experience of prison must get pretty hacked off with television shows and films that represent being banged up as entertainment. Yet, I have to say that this is odd. I mean, the balance of this show is more towards being entertaining than being serious.

So I like the way that you start off with a brief but funny parody of that bit from The Shawshank Redemption where some guy plays opera music over the public address system and all the prisoners, ha, ha, feel “free”. Yeah, that bit always was a bit too much. Then, in a series of rapid scenes your cast — Lucy Edkins (The Artist), Jennifer Joseph (Muvva), TerriAnn Oudjar (Pitbull) and Jade Small (Queenie) — take us through the creation of the show, from brainstorming ideas and workshops to an end-of-show dance to the music of “Instant Hit” by the Slits (as it happens, I do remember them). Along the way the best bits are the satires about Orange being the New Black, about porn movies set in women’s penitentiaries, and the famous soap characters who spent time in prison and all the clichés of what people say in media versions of the experience. Amid the mockery and the fun, I quite like the excited card games and the slow reverse strip tease of putting on convict uniforms.

And what can I say about the way you’ve staged the show? Well, the revue format is pretty standard for this kind of theatre so I’ms sorry to say that you get no marks for either originality or creative breakthrough. And the combination of elements is kind of familiar: the verbatim interviews (I like the apoplectic warden); video projections; Q&A with the audience; monologues; theatre games. In fact, anything except a straight drama with a straight story. So while your refusal to substitute a true story for a fake story is understandable, and pretty postmodern too, it does suggest that it is impossible to convey the truth about some experiences on stage. And that strikes me as being a council of despair.

Then there are the serious bits: each of your cast members has a monologue about their experiences and the most moving, Muvva’s account of being caught smuggling while travelling with her kids, is powerfully staged. But you don’t let the bad stuff linger. And I did wonder if you’re trying just a little too hard to please. In fact, the cast deliberately present themselves as likable and ordinary, and not ashamed of their past experiences. At least, not on stage. So, Clean Break, if the intention is to turn bad stuff into comedy then it certainly succeeds. And the stage devices you’ve chosen, which include video projections of text and a “tour” of a prison mapped out virtually on the playing space, all work quite well.

What else? Oh yes, another bit that made me laugh out loud was when the cast read out reviews of their fictional show, quoting some real reviews of other similar shows. As it says in the playtext, these have been “repurposed for Inside Bitch”. And some of the words quoted had a familiar ring. The critics — and I include myself here — come across as patronizing, pompous and out of touch. Not exactly a surprise. Okay, okay, fair play. As I always say, if you’re expecting trouble then it’s always best to get your point across first. And strongly. But even at the risk of being mocked and dismissed, I have to say that much as I enjoyed a lot of this show, I was also a bit disappointed by it. Let me tell you why.

In the past the Clean Break shows that I most enjoyed were strong stories written by playwrights who had worked in women’s prisons. They almost always had a power that was derived from real experience, but it was intensified by the individual creativity of a writer, someone of the caliber of Winsome Pinnock or Lucy Kirkwood or Vivienne Franzmann or Chloe Moss or Rebecca Prichard. And, in those shows, the acting was always great. But although it’s quite daring to let your Clean Break members have a playful laugh about how media misrepresents them, an hour-long show of short sketches really isn’t the same as a coherent drama. Stories about stories somehow aren’t as satisfying as straight stories.

So Clean Break, although your cast are all having fun on stage and interacting with the audience, giving us popcorn and offering to sell us some merchandising (Inside Bitch T-shirts, baseball caps, mugs or Barbie dolls, all very witty I’m sure) I do wonder what the point of it all is? The most intense bits are the silences and those in which the bad stuff was so bad that it couldn’t really be expressed (I get it, I get it). But if this is right, what else is the show saying? That prison is bad, but representations of prisons in the media are even worse. Seriously? Is that all? Okay, fair enough, but don’t you think we already knew that? (Asking for a friend.)