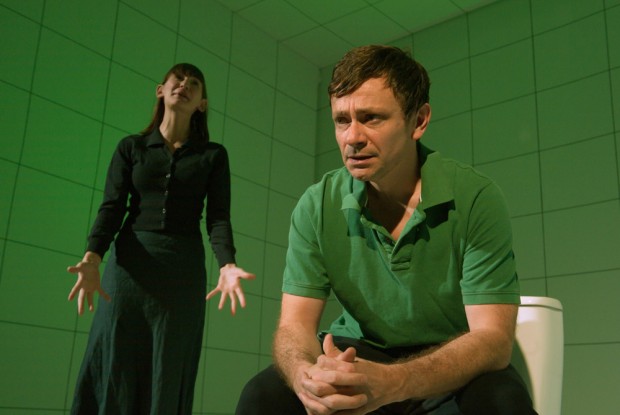 In the non-Olympic sport called “Name Britain’s greatest living playwright”, most of the contestants have always been men. Nowadays, that is all changed and the odds-on favourite would be Caryl Churchill, who has been creating provocative and boundary-busting drama for four decades. Her plays Top Girls, Cloud Nine and Serious Money are curriculum classics, and her more recent work — Far Away, A Number and Drunk Enough To Say I Love You — triumphantly prove that her originality remains unimpaired by age.

The same can just about be said of her latest. The play has no named characters, and consists of a cascade of short dialogues which on the page are a challenge to director, in this case James Macdonald, and actors alike. Before the play can be staged, its meaning and its situations must first be discovered by the company. They are free to invent almost anything. From the title, Love and Information, we can understand that this is a play about the need to know and the need to love. But how is that shown?

Each scene is seemingly unconnected to the any other. So 16 actors play dozens of different characters in some 50 scenes that are organised into seven sections. The running time is about 100 minutes, which means that some scenes are two or three minutes long, and many much shorter. The settings include the most familiar locations of modern life: the sofa, the double bed, the kitchen table, train, airport, canteen, garden, a sauna, a remote farm with no mobile phone signal, a room being decorated, a rainy day on the beach. And more.

The characters are equally varied and equally recognisable: lovers, couples, married couples, families, mothers and daughters, mothers and sons. Office workers and friends, scientists and celebrity-obsessed teens. Some believe in God, others are disturbed. Some traumatised. It’s all very English, this fast-moving panorama of everyday life: the culture of secrecy, Radio Four jingles, Big Ben chimes, the wedding video, the hobbies and the fads. People compete in ballroom dancing contests; there is a cricket pitch. Yes, this is us.

Out of these tiny slivers of theatrical information, Churchill provides teasing glimpses of bigger stories. A celebrity in hiding, a hidden affair, a family secret, a traumatic accident, and especially the devastation of depression. And the whole play pulses with questions: is it better to know things — or not? How does knowing a secret affect a love relationship? Is it best not to know? What are the things that only a couple knows? What does God, or natural disasters, or irrational numbers, mean? Really mean. When our memory goes, does our identity crumble?

In these questions, confessions, disclosures, betrayals and bemusements, some secrets are shown to have advantages and some to be destructive. Some forms of love seem stronger than others. Sometimes having no feelings seems like a reasonable response; at other times, it means the absence of love. Occasionally, you catch the silence of deep grief. Some information makes a difference; some doesn’t. One young man falls in love with a virtual girl. Foolish.

Churchill’s writing is typically nimble, and this open text is squarely in the long tradition of Samuel Beckett, Martin Crimp, Sarah Kane and more recently Simon Stephens. It’s more mannerist than innovative. But she does provide a wealth of material, about technology as much as about feeling. It’s a play that shines bright with intelligence. So although she makes available little spasms of empathy, moments of connection, the big picture is of a chilly world suffering from information overload. In the play, as in the world we live in, there is too much information. And the traumatised and those afflicted by mental illness are here powerful metaphors for the human condition.

Macdonald’s vivid production has a white cube set by Miriam Buether, and his pacing and vision are hard to fault. The large cast are never in any particular role for long enough to engage the audience, so it would be odd to single out individuals from the 16 hardworking actors, a couple of whom are making their stage debuts. Like a modernistic work of art, this is a minimalist evening, with the repetition of gestures being an integral part of its meaning. After a while, the novelty does wear a bit thin, and it is easier to respect than to enjoy. Or rather, it’s easier to admire the information than to feel the love.