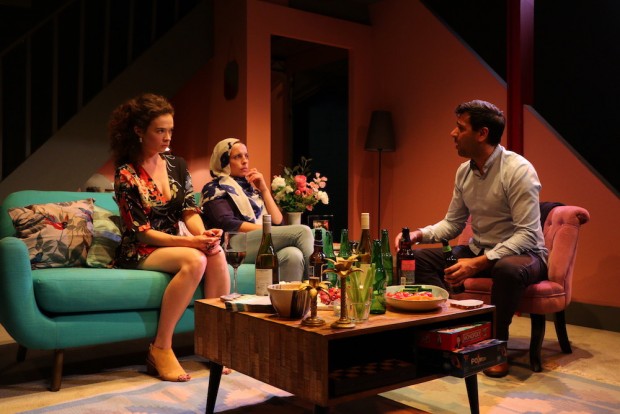 Britain is rightly proud of its record on multiculturalism, but whenever cross-cultural couples are shown on film, television or the stage they are usually represented as a problem. Not just as a normal way of life, but as something that is going wrong. I suppose that this is a valuable corrective to patting ourselves on the back about how tolerant a society we are, but do such reality checks make a good play? The latest exploration of this cross-cultural theme is Stephanie Martin’s new one, which is a half comedy and half drama about Islam, and which opened tonight at the ever-enterprising Park Theatre.

Alkaline begins as a typical “me and my mates” story, set in a nice middle-class sitting room complete with sofa, nibbles and beers. Sophie and Nick are a youngish couple who are about to get married, but their relationship has hit a rocky patch. They’ve been together for ages, but things are not going smoothly: she hates her well-paid job and is full of anxiety, constantly criticizing him, while he snorts too much coke, and acts like an overgrown child. On this evening, they are hosting a drinks party for Sarah, who has been Sophie’s best friend for the past 20 years since they were 11 years old, and her new man, an older British Asian called Ali, who is already married and has three young children. But a drinks party seems inappropriate: Sarah has just converted to Islam, and now wears a headscarf and doesn’t drink alcohol.

Like an update of Mike Leigh’s Abigail’s Party, this is a study in social awkwardness. Although Sophie is vaguely reminiscent of the monstrous Beverly in Leigh’s play, and she bullies her fiancé Nick, acting as if she was his mother, putting him down and embarrassing him at every opportunity, while vainly keeping a lid on her own feelings of panic, masking her own unhappiness with senseless chatter. Vivid stuff, yet Martin’s drama lacks the stomach-twisting horror of Leigh’s original. At the same time, Sarah seems cool and collected, and is evidently appalled at her childhood friend’s silliness and tactlessness. You do wonder why she accepted the invitation.

Sophie’s views on Islam are neither enlightened nor intelligent: she thinks it’s an Abramovich religion rather than an Abrahamic faith, and her characterization of Jesus as a nice person and hot is clearly eccentric, if not downright stupid. She is clumsy enough to treat Ali — a northern Brit through and through, who doesn’t really care much for religion — as if he was an outsider. Sophie’s tactless comments on large Asian families and classes full of Muslim pupils in Maida Vale are both funny and revealing, while her barely suppressed fears about Islamists grooming vulnerable women are like a thermometer taking the temperature of our times. The play quite contemporary in content, even if it is traditional in form.

When Ali’s wife, Aleesha, from whom he is separated, arrives at the party, a confrontation of sorts is inevitable. Ali is forced to make good on his claim that he cares most for his children, while Sarah comes face to face with Aleesha, who suddenly seems like the saneness person in the room. Despite this conflict, we never really get inside Ali’s head — we know that he is sensible, and loves his children, and mocks Stephen Frears’s Victoria & Abdul, but very little else. Likewise, Nick also seems to be underwritten, although he does get one good speech about Brexit, Trump and the current state of the nation. Although Sophie mocks his liberal ideas, cruelly pointing out that despite the fact that he has a job with a bank he is living off her father’s money, he remains a bit of a mystery.

The main problem with Martin’s play is that both the situation and the couples’ discussions are pulled towards cliché and predictability. One conflict is that Sophie wants Sarah to be a bridesmaid, but doesn’t want her to wear a headscarf at the ceremony — it wouldn’t look good because the other bridesmaids won’t be wearing headscarves. But neither the conflicts, such as they are, are sufficiently developed, nor is the plot satisfyingly gripping to make us care much about the feelings of either woman. Yet, somewhere in this comedy of modern manners, there is a good story: Sarah’s tale of conversion in which her experience of contemporary youth (sex, drink and drugs) just made her feel as if acid was eating her from the inside — her new faith has turned her alkaline and has given her a grounded calmness.

But, sadly, this story is obscured by the comic form of the play, and doesn’t find much room to breathe. It doesn’t help that Alkaline is only 75 minutes long, giving the situation a sense of smallness and incompleteness. On the other hand, director Sarah Meadows and designer Georgia de Grey have created a detailed and often humorous world with a cast that is agreeably bright and pretty convincing. EJ Martin’s neurotic Sophie is nicely contrasted with Claire Cartwright’s self-possessed Sarah, while Nitin Kundra’s Geordie Ali balances Alan Mahon’s Irish Nick. Reena Lalbihari’s Aleesha has little to do, but does it well. But the overall impression is that there is a better play struggling, and failing, to get out of this one.