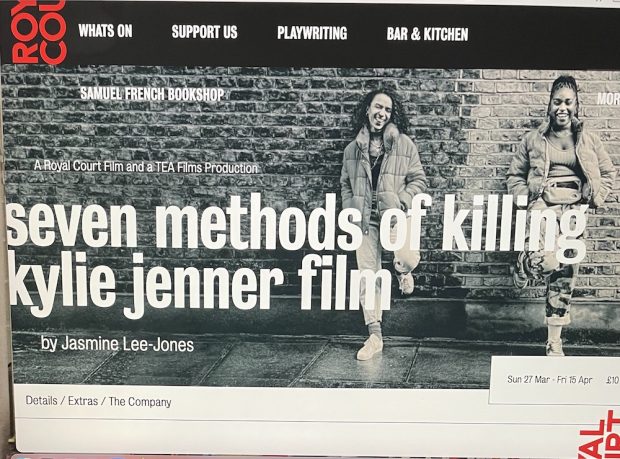 Streaming theatre is such a good idea that it surprises me that many more shows are not filmed. But I also exalt in the ones that are! Jasmine Lee-Jones’s thrillingly penned and emotionally truthful Seven Methods of Killing Kylie Jenner, which was first staged at the Royal Court in July 2019, has now been filmed by Tea Films. After a thunder and lightning prologue, this story of the fraught female friendship between young twentysomethings Cleo and Kara, when Cleo takes to twitter to contest the hype about Kylie Jenner’s success, is fabulously captured on film. The camera is as nimble as Lee-Jones’s dazzlingly dialogues, and the close ups brilliantly take us right up and face to face with the actors Leanne Henlon (Cleo) and Tia Bannon (Kara), whose performances are wonderful examples of integrity, utter conviction and mutual generosity. As well as their readings of their contrasting characters, the way they voice the noise of the twitter sphere is a masterclass. The wider shots beautifully highlight their interaction, and as the story develops the emotions of the characters gradually begin to sizzle and bake. This show will blow your mind in the digital sequences and tug at your heart in the scenes of strongest feeling. Perfect mix of laughter and sadness. And the freshness and fierceness of the writing is perfectly complemented by the filming. Directed by Milli Bhatia, this is 90 minutes of pure bliss, with a neatly witty meta-theatrical ending. Super superb. Hashtag contemporary classic.