About Living Newspaper: A Counter Narrative 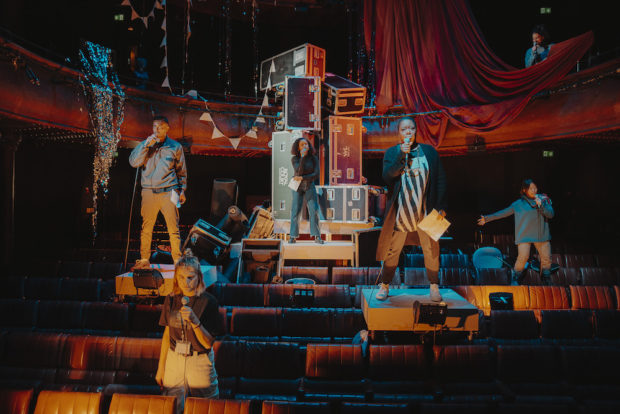 Read all about it! Well, maybe not. Maybe more like: live the news and then watch it streamed. Inspired by the radical theatre of the Federal Theatre Project in 1930s New Deal America, which employed thousands of artists during the Great Depression, the Royal Court opened its doors with Living Newspaper: A Counter Narrative, a site-specific extravaganza at the start of December. This gave employment to dozens of creatives. Sadly, the new Tier regulations in London mean that this project is now only available online. In Edition 1, which I watched last week, the highs and lows of rapid writing about what’s in the news are apparent. Some 15 varied pieces of theatre, sometimes named after the sections of print newspapers, usually quick playlets, take place all over the Royal Court building, from the main stage to the staircases, from the alley outside to the box office and bar. It’s a great way of putting some passion into the venue’s architecture: familiar rooms, nooks and crannies are suddenly transformed. Written at speed the pieces have a spontaneous feel and sometimes an acute emotional punch. The show starts in the main space with The Front Page — written by Miriam Battye, Nazareth Hassan, Matilda Ibini, Somalia Nonyé Seaton, Katherine Soper, Chris Thorpe and Daniel York Loh — a kind of R&B piece that weakly articulates current anxieties. Then there are jokes about Priti Patel and metaphors about how the cake of global resources is cut and who gets the biggest slice. My favourite playlet is Thorpe’s The Weather Room, with its repeated refrain “The last time I will do that” sounding very apt in the present circumstances. Likewise, it was very good to hear York Loh’s The Newstand, which explores the experience of the Chinese community under lockdown, offering an insight into lives that are oddly absent from British stages. As you’d expect, Jasmine Lee-Jones and Battye produce work that is emotionally true and wryly humorous. The full list of writers includes Amir Gudarzi, Sonia Jalaly, Suhaiymah Manzoor-Khan and Temi Wilkey. The 90-minute show is beautifully designed by the theatre’s Design Collective (Shankho Chaudhuri, Debbie Duru, Cara Evans, Sandra Falase, Zoë Hurwitz, Chloe Lamford) and facilitated by associates Milli Bhatia, Ola Ince and Lucy Morrison. I do have my doubts about some of the hype around the enterprise: as far as I can see only a few of the sketches offer a real counter narrative and many just parrot rather banal lefty clichés about racism and colonialism. At the worst moments I just want to shout “Yes, I know!” — some of it is so 1975. Then there are several moments of wild utopianism which remind me of the late 1960s. So if the promise of being “urgent, responsive and fast” is not always achieved, at its very best this project is both pertinent and full of joyous energy.