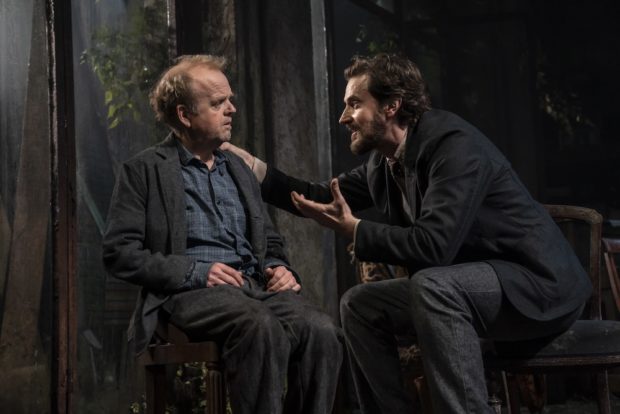 Sometimes the hype is justified. Last night, I watched the much lauded film version of Ian Rickson’s production of Anton Chekhov’s Uncle Vanya. Like so many others who have been wowed by this film I am struck not only by the way in which the work brilliantly captures the mood of these hard times, but also by the superb quality of the camerawork. Ross MacGibbon, directing the screen version, uses a number of techniques — from rapid close-ups to hand-held movement — which create both intimacy and a real sense of compelling engagement. This is not just an adaptation of a live show — it’s a perfect art work in itself. Rickson’s version is especially good at showing the family relationships of this group of spiritually exhausted and intellectually bankrupt land owners and their friends. The tensions between Toby Jones’s irritable Vanya and his critical mother (Dearbhla Molloy), as well as between Rosalind Eleazar’s disappointed Yelena and her insufferable academic husband (Roger Allam), come across with dazzling clarity, while Aimee Lou Wood’s naive Sonya, Vanya’s niece, has rarely been so sympathetically portrayed. As the local doctor, Astrov, Richard Armitage is a fine mix of drunken excess, righteous anger and smoldering passion. There’s great work also from Anna Calder-Marshall (Nana) and Peter Wight (Telegin). Direct address to camera heightens the story’s psychological insights. Filmed in August 2020, inside the empty Harold Pinter theatre, Conor McPherson’s version of the play works very well, although it is sometimes too explicit and often lacks subtext. And although Rae Smith’s set design is pleasurable in its evocation of a cross between a gothic mansion and a squat, it doesn’t really suggest 19th-century Russia; as usual, I would have preferred a much more thorough updating. But never mind: the main themes of this classic work — the need for work, the elusiveness of love, the poverty of academic life, the lassitude in the face of passing time, the health of the people and the ecology of the land — come across with enthralling freshness. And the beautiful cinematography makes this a really exceptional armchair experience — believe the hype. Genuinely unmissable.