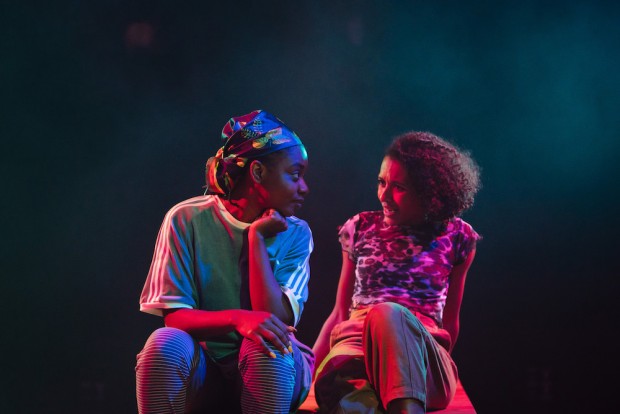 Few theatres have done as much to promote new young talent as the Royal Court; few theatres have done as much to stage plays about the pains and pleasures of the digital world; few venues have tackled the themes of race and gender in contemporary society more effectively. Now, once again, it’s time for a young writer to make their debut in the upstairs studio space. Step forward Jasmine Lee-Jones, whose new play, Seven Methods of Killing Kylie Jenner, has an arresting title, and has been advertised as an exploration of “cultural appropriation, queerness, friendship between womxn and the ownership of black bodies”, which is great. But can it live up to the hype?

Well, actually, yes it can. The play takes its title from twentysomething Cleo’s sudden rush of anger when she reads a tweet by Forbes hailing the 21-year-old Kylie Jenner as “the youngest self-made billionaire ever”. Yes, it’s enough to make you spit. Most people would just write a witty response and leave it at that. But Cleo is not most people: she begins a tirade of tweets about the injustice of rich white women managing to get more rich simply because of their background. Remind you of anyone? For Cleo this is just another example of white supremacist capitalist claptrap. So she decides to tweet about different ways of killing the billionaire.

Cleo’s tweets are amusing and incisive, but her best friend Kara is worried. Aren’t they also too extreme? Why can’t her friend just write “a simple intelligent disagreement with a dose of wit”? Why the death messages? Why the knife emojis? As the two friends discuss Cleo’s tweets, the whole history of their relationship gradually bubbles up: they are both black, but Kara is more light-skinned than Cleo; Cleo has man trouble, but Kara is a lesbian. As they discuss the different feelings that they have experienced, their frustrations with each other become apparent. At the same time, Cleo’s Kylie Jenner tweets get even more and more extreme, and soon twitter trolls are onto her. The troller becomes the trolled.

To say that Lee-Jones tells this 80-minute story with vigour is like saying that a twitter storm is a mild inconvenience. Her text is alive! It jumps off the stage, does a quick somersault over our heads, and then lands with a bang. She artfully alternates scenes set in Cleo’s bedroom with scenes that take place online, giving an amazingly energetic sense of how real life and twitter life can collide, combine and contradict each other. It’s one of the liveliest pieces of writing to appear for a long time. At the same time, there’s a raw pain that aches through the piece. Amid all the jokes about female friendship, there’s a real rage about racism and about how black women are treated.

It’s the mix of the serious and the funny that makes this show so bright. I love the jokes about academic discourse, the reference to Prince, Cleo’s take on her man, her hilarious “dick withdrawal symptoms”, the chat about masturbation, the reference to Beyoncé, the debate about blackness, the conflict over memory, the perils of anonymity on the net, the details of the seven ways to kill an icon… In fact, I love all of it. As directed by Milli Bhatia, there are lots of big joys and little ones: at one point, a miniature tumbleweed is blown across the stage. In general, as shows such as Teh Internet Is Serious Business prove, staging the digital world is quite a challenge. This production takes this head on with enormous energy and plenty of fantastic fun — the result is really exciting. Believe.

Of course, only a dedicated hermit would be unfamiliar with the outlines of Lee-Jones’s picture of identity politics. The tensions between black women of different backgrounds — Kara is mixed race — and of different sexualities are well known, but that doesn’t mean that they shouldn’t be aired once again. Especially given the theatrical flair and emotional integrity of this two-hander. And its convincing sense of urgency. By the end, the feeling of agony and anger is palpable, and the playwright works hard to avoid letting us off the hook. In a way that reminded me of Selina Thompson’s salt., Lee-Jones widens the focus to encompass the history of the slave trade.

Inspired by Natasha Gordon-Chipembere’s 2015 book on Representation and Black Womanhood: The Legacy of Sarah Baartman, this play engages with the vile history of how, in the early 19th century, European powers seized black women from Africa and displayed them in cages as curiosities. As she points out, we can’t even be sure of the birth name of the woman known as Saartjie (Baartman). But her fate is recounted in excruciating, and rather moving, detail. In a powerful contrast to Martin McDonagh’s ghastly A Very Very Very Dark Matter, which made merry with the idea of a captive black woman, Lee-Jones writes with intelligence and control.

Yes, this is one of those productions which challenge you to go with the flow: the rapid rat-a-tat of the dialogues, with their internet slang and visual references, is not always clear, and you really do need to look at the playtext, with its festival of memes and twitter messages, to see the full splendour of the playwright’s imagination. Rajha Shakiry’s design suggests the tangles not only of the internet, but also of any close friendship (and Lee-Jones is particularly good on how past incidents fester in the memory). I was also blown away by the performances of Danielle Vitalis (Cleo) and Tia Bannon (Kara), who switch effortlessly between the intimate domestic scenes and the wilder internet world. Their passion is both inspiring, and just a touch frightening. And that is as it should be.