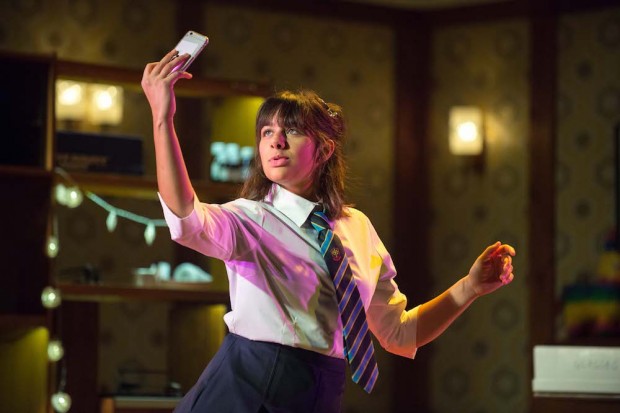 A couple of nights ago, I went, for the first time, to the Queen’s Theatre in Hornchurch, which is currently reviving — in a co-production with Derby Theatre — Mike Leigh’s 1977 classic, Abigail’s Party, along with a companion piece, Atiha Sen Gupta’s Abi. This 60-minute monologue, performed with enormous zest and attractive energy by Safiyya Ingar, is a response to Leigh’s play and looks at what happened to a couple of his peripheral characters — and brings some of the story’s latent themes right up to date. The focus is on Abi, the 15-year-old granddaughter of Leigh’s Abigail, whose offstage party drove her mother Susan into the arms of her neighbours Beverly and Laurence in the original play. Abigail, who is now in her mid-50s, is very ill in hospital so Abi has decided to hold her own party at her gran’s house. She arrives and begins to prepare: the drinks, the nibbles, the music. As she does so, she tells us about her mother, Patti — named by the punk-loving Abigail after 1970s rebel icon Patti Smith — and her father. Both parents are accountants so Abi prefers the company of her gran, and especially her attitudes to life. Gradually, however, the school girl says some things that feel like little grenades ready to go off: she doesn’t know who her granddad was (Abigail names, with a nod to Mamma Mia!, three possible candidates), and, more troubling, she’s met a boy on the internet. And she’s invited him around for pre-drinks before the party begins. Abi wants to lose her virginity and the contrast between her brash teen declarations and the emotional vulnerability that peeks through is one of the joys of both the writing and the performance. Gradually, the playwright gives a complete picture of teenage anxiety in the digital age, locating the mixed-race Abi neatly within a thoroughly convincing family, and giving life not only to her own creation but to Leigh’s offstage character. The storytelling is great, the emotional build up to the climax brilliantly achieved and the buried issue of sexual violence relevant and contemporary. As a feminist reworking of Leigh’s original, this is just right. Engagingly directed by Derby Theatre’s Sarah Brigham, this really is a little gem, fully imagined and superbly written. Highly recommended.