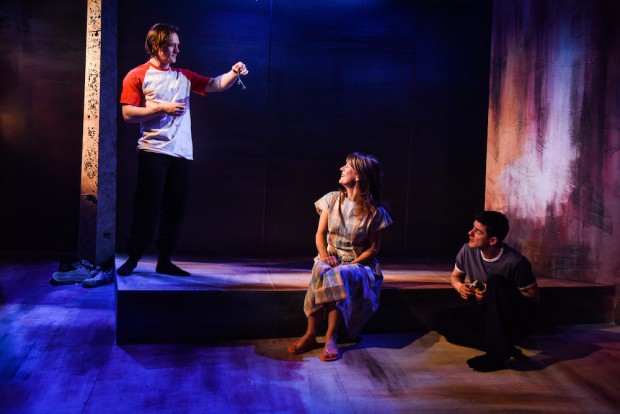 The new writing year has started slowly. Apart from a couple of obscure fringe shows, there have been no openings of brand British new plays worth discussing. So while television is buzzing with imaginative, well-written and well-filmed drama, it’s hard to see any good new plays on the horizon. Or is it? At first sight, Michael McLean’s new one, Years of Sunlight, looks very promising. The playwright started out at the Liverpool Everyman and has also been a member of the Royal Court’s young writers programme. And his play is about an important contemporary issue: how some young people, and indeed some communities, have been “left behind” in the brave new not-very-much-thank-you.

The story starts in 2009 with Paul, a fortysomething professional who works in computing, returning to his home town, Skelmersdale, a 1960s overspill from Liverpool. Now living in Dublin, he’s come to see his mother, Hazel, who migrated to Britain from Ireland because she was an unmarried mother. He’s also in search of his best childhood friend, Emlyn, an artist who has taken a different path in life, becoming an addict and jobless. Hovering in the background of the narrative is their neighbour Bob, an older married man who has been popping in to see Hazel on the quiet for years. As Paul looks around he sees how much Skelmersdale has changed over the decades, and the play starts to move back in time, gradually showing us what happened.

Although Skelmersdale is a symbol of the great new housing projects of the 1960s, a welcome change from overcrowded Liverpool slums, both Paul and Emlyn come from difficult backgrounds. Hazel is a struggling single mother while Emlyn has no parents and has been brought up in care and by foster parents. Yet the two boys are quite different: to simplify, Paul is timid while Emlyn is adventurous. Because Emlyn is Paul’s best friend, he has been informally adopted by Hazel and she takes the two boys on holiday in Rhyl together. It is exactly at one moment in these sunny years that McLean shows how a violent incident with Bob pushes Emlyn into the beginnings of his addictive habits.

Written with subtlety, grace and originality, Years of Sunlight not only shows how it is fruitless to look back, whether in anger or despair, but also refuses to offer any simple explanations for the different paths that Paul and Emlyn have taken in life. McLean cleverly plays on the contrasts between the two boys as they grow older. Often it is Emlyn, the down-and-out with the drug habit, who seems to be happier, more at peace with himself, than Paul, the successful family man whose marriage turns sour. The relationship of both with Hazel is shot through with jealousy and the tensions of sibling rivalry, with Emlyn acting as a substitute son after Paul leaves for Dublin.

The play explores this feeling of dependency in a variety of ways. Emlyn, of course, becomes dependent on various drugs, but he also depends on Hazel’s maternal love. Paul attempts to become independent of all family ties, yet he only finds unhappiness. Hazel is emotionally dependent on Bob, a curious character who both blusters against youth and has a real, almost touching, affinity with the music of Frank Sinatra. Everyone is dependent on the economy, which locally has left the young with the stark alternatives of emigration or dole. The feeling is of a washed up community left behind by the tides of global change. A kind of failed utopia. No wonder their memories of the past are bathed in sunny nostalgia.

Although the play reminds me of David Eldridge’s In Basildon, McLean’s voice is distinctive and he has been well served by director Amelia Sears and designer Polly Sullivan. A neat co-production with Seared, the cast is restrained and convincing: Mark Rice-Oxley’s inhibited and ambitious Paul contrasts with Bryan Dick’s lively and troubled Emlyn, while Miranda Foster’s decent Hazel and John Biggins’s authoritarian Bob are also well drawn. The abstract set, with its cloudy colour patches, suggest Emlyn’s artwork, and the video projections effectively locate the flashbacks in time. But although I was impressed by McLean’s ability to traverse some 30 years in 75 minutes, I wasn’t blind to the fact that this is quite a slender piece which could have said more and explored its situation more fully. But at least the new writing year has begun.