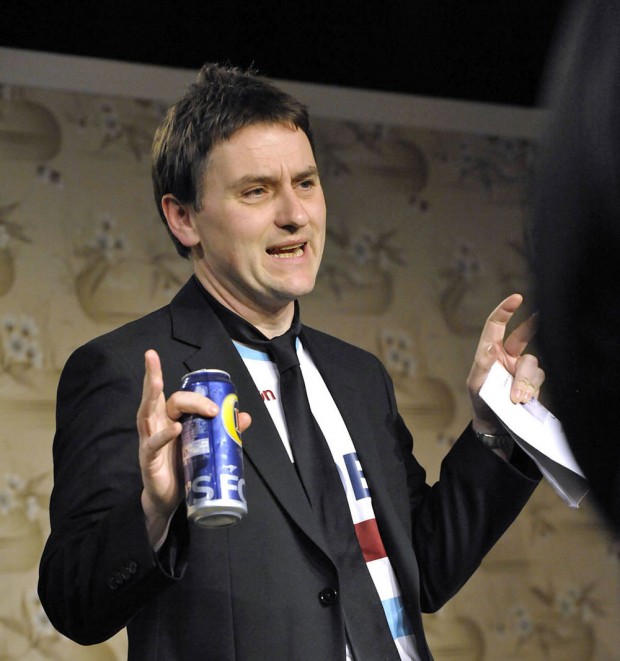 Is there a more evocative location than Essex? In David Eldridge’s 2000 play Under the Blue Sky, one his characters shouts the unforgettable words: “I’m from Essex and I’m dancing!” Now back at this venue for the first time since that play, Eldridge proves that he is much more than the common characterisation of him as “the writer as bloke”. But can his new play, which opened tonight and is set in his favourite county, dance as well as his previous ones?

Sixtysomething Len is dying of prostate cancer. Gathered around his bedside are his two sisters, Doreen and Maureen, but this picture of working-class family harmony is disturbed by the fact that they haven’t spoken to one another for almost 20 years. Doreen’s son, Barry, is also there, as well as Len’s best mate, the wise-cracking Ken. The atmosphere fizzes with tensions from old animosities, and Ken’s good-natured jokes grate against the more sober seriousness of Barry. Ironically enough, while their mothers hate each other, the cousins Barry and Shelley are very close. After Len’s death, the second act brings these and other family members onstage. Barry’s wife, Jackie, joins the mourners, and so does Maureen’s daughter, Shelley, the first one in the family to go to university, with her middle-class boyfriend Tom, a writer. But it is not until Act Three, the day of Len’s funeral and the reading of the will, that the barely suppressed family conflicts explode. Then, with a piece of elegant craftsmanship, Eldridge offers a final scene which fills in the gaps of the sibling conflict.

So In Basildon is partly a homage to the genre of 1960s family reunion dramas, and partly a loving look at working-class life over the past 60 years. As the characters argue and banter, you can sense — like a psychogeographic subtext — the great social migrations of the second half of the 20th century. There, just out of sight but present in spirit on stage, are the millions of working-class people who streamed out of the East End in search of a better life, first to Romford and then to Basildon. South Essex is deftly distinguished from other parts of that county, and class conflict takes centre stage. When middle-class Tom has too much to drink, the antagonism between working class and middle class is explored in all its complexity, with neighbour Pam playing a crucial role. With a mix of fine observation and a light touch, Eldridge looks at the class differences in cultural taste and political allegiance. Here social embarrassment collides with class experience, and New Labour is rightly seen as a betrayer of the workers.

Eldridge’s sure instinct for humour and ability to balance the tragic (the death that awaits us all) and the lighthearted (laughter in adversity makes us human) is evident from the off. There are plenty of memorable moments: the family sing “I’m for ever blowin’ bubbles”; a woman is called a Kronenburg, looking “16 from the back and 64 from the front”; “stirring the porridge” is a synonym for sex; Essex is called “the pride of England”. Yes, this is also a state-of-the-nation play.

Artistic director Dominic Cooke and designer Ian MacNeil have remodelled the theatre’s main auditorium so that the audience become witnesses not only to the working-class characters on stage, but also to the middle-class theatre-goers that are mentioned in some of the dialogues. Cooke’s meticulous direction gets detailed performances from an excellent ensemble cast. As Doreen, Linda Bassett is superb, and at one point her gasp of love is soft but powerful. Peter Wight’s Ken is both charming and bitter, while Ruth Sheen’s Maureen, Lee Ross’s Barry, Debbie Chazen’s Jackie, Jade Williams’s Shelley and Max Bennett’s Tom are all excellent. Wendy Nottingham’s Pam is a delight. Although I feel that Eldridge loves his characters much more than I ever could, and that even Cooke is unable to make the final 20 minutes as energetic as they might be, this is a diamond production of a very humane play.