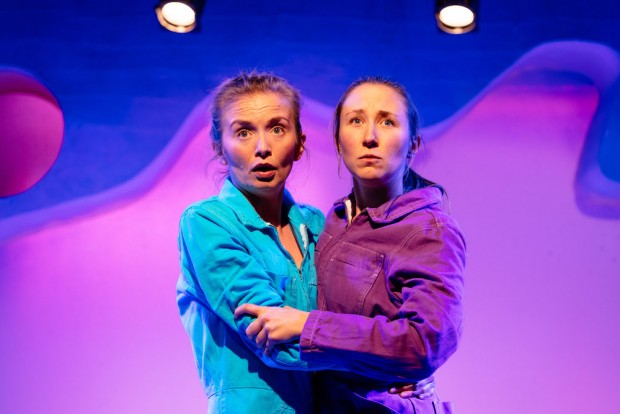 Every fairy tale is a cauldron of emotion. These are tales that steam with resentments, flare up in violence and bubble with passion. So the subtitle to Ross Willis’s dazzle-bright debut play, Wolfie, which is “some sort of fairytale”, immediately signals the fact that it’s all about psychology and feelings. And it certainly is. Written with enormous energy and zest, and performed with enormous commitment and theatrical flair, this show is a dark tale that positively throbs with excitement — and proves once again that some of the most innovative work is being staged at fringe venues, not at the big flagships.

Wolfie is a story about a pair of female twins. They are separated soon after birth and grow up in two very different environments. But, unlike for example Willy Russell’s Blood Brothers, Willis avoids the typical contrast of this genre, namely between one twin growing up in a disadvantaged working-class family and the other in a privileged middle-class family. Instead, of his twins, named A and Z Sharky, one grows up in an emotionally poor family — and the other in the animal kingdom! So while Z lives among depressed and joyless folk, A is brought up in the company of wolves: hence the piece’s title — it is, after all, a fairy story, a fable, a parable.

This original idea enables Willis to fuel his play with intense feelings of anger: both A and Z are equally distressed by the poverty of human love. Z is largely ignored by her mother, a soggy woman who is confined to her bath, to the point where her daughter has no clean clothes and has to rely on Miss Strontium, a school teacher who helps her. But the absence of family love means that she will repeat the mistakes of her own impoverished mother, which she does when she conceives twin girls in her twenties. By contrast, A is brought up in the wild but warm embrace of wolves, learning to hunt and howl in the forest, sensitive to nature in all of its forms. When, at puberty, she is forced to rejoin the human race her social problems begin.

Willis’s text is a gloriously imaginative and wonderfully colourful extravaganza, studded with burning images and peppered with surreal episodes. Although the core emotional fuel is a strong anger about parental neglect, there’s also plenty of charm, with fun sequences and lots of jokes (a talking woodpecker and a gonzo kidney op). Amid the rapid shifts of focus, and rollercoaster turns, there lingers a powerful and uncompromising argument about the necessity of love. It’s all about nurture, not nature. Without parental care, kids become stunted, get into trouble and go off the rails. With this impeccable political attitude, Willis is able to soar into his fantasies without inhibitions. I love the talking trees and the wolf pack bits, and admire the bright metaphors of loss, loneliness and sadness.

At the same time, the playwright adopts a vaudeville style in which A and Z both tell their own, and each other’s, stories in a kind of bizarre cabaret, which starts with the twins in the womb, then sees them at 13 and at 26 years old. The result is a kind of ritualized performance that is reminiscent of the best of Philip Ridley’s work. In a torrent of memorable phrases, such as “unexpected poverty in the baggin area” and “cuddle buddies”, the performances, directed by Lisa Spirling on Basia Binkowska’s dreamscape set, are vigorous and often joyful. There’s a fair bit of audience participation, but nothing too intrusive. It’s great!

Actors Sophie Melville (A) and Erin Doherty (Z) deploy a full range of emotional registers, portraying Willis’s empathy with mothers who find it difficult to love “naturally” as well as his anarchic sense of humour. These well-grounded performances, sometimes frantic, sometimes cool, are fab, and point beyond this fringe theatre to the big, big world, and through the howling wind that blows around it you might pick up distant sounds of other plays, other stories: Enda Walsh’s Disco Pigs, Caryl Churchill’s Far Away or even Nina Segal’s Big Guns. At an even greater distant there’s a tang of Ann Jellicoe’s The Sport of My Mad Mother. Yes, Wolfie is a piece of leftfield theatre red in tooth and claw. Sharp fangs of joy! Long howls of sheer delight!