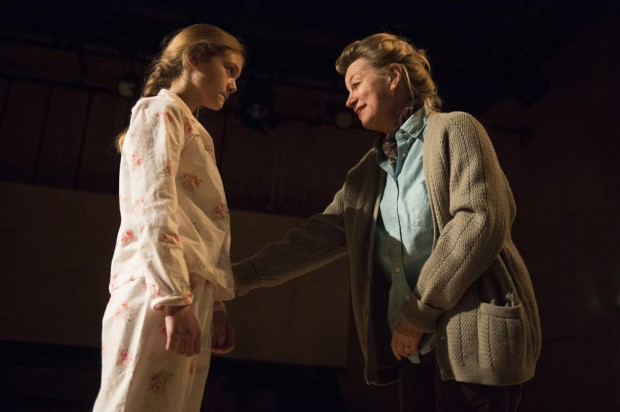 How can you convey the sheer incomprehensibility of ghastly acts? While most playwrights, when confronted by the horrors of genocide, settle for a journalistic approach that is realistic and documentary, a brave handful of writers take a less well-trodden path. They explore the terrain of trauma by using their imaginations: they are not so much photographers as painters — and their visionary abstractions are often more emotionally truthful than the formulaic coverage produced by news programmes.

Caryl Churchill’s contemporary classic, Far Away, which was first staged in 2000, is a good example of this. It is a fantasy play that carries multiple resonances: it evokes the horror of the 1990s Bosnian genocide and, which is even more remarkable, seems to anticipate the total craziness of the War on Terror. I’ve heard one playwright, Simon Stephens, say that it’s the best play about 9/11 — even though it was written more than a year before that cataclysmic event happened. This is right: some playwrights, Churchill is one, Philip Ridley another, are simply visionary.

Far Away is a very short play with three scenes: the first is set in the kitchen of Harper, a middle-aged woman who lives in a remote house. Her young niece, a girl called Joan, has accidentally witnessed a horrible scene involving Harper’s husband. The aunt tries to persuade her that she’s imagining things. The second scene is set in a grim factory, more than a decade later, where Joan is working as a hat maker. She chats to Todd, who’s been working there for a number of years, and it emerges that the hats are part of a very disturbing ritual. In the final scene, Harper and Todd are waiting for Joan at Harper’s house, and their dialogue shows Churchill letting rip.

As an account of the current culture of fear, where terrorist plots are constantly uncovered and strange alliances are made across the globe, this small play is like a hand grenade being thrown into a pool. At first, the effect is just ripples; then there’s an explosive percussion. When the scenes are domestic, the idea of the banality of evil — simple acts committed by ordinary people — comes across strongly. When the language takes flight, all boundaries disappear.

By the final scene, the xenophobic antagonisms, which have been hinted at during the first part of the 40-minute show, have spread beyond humans and engulfed all of the natural world: Moroccans have allied themselves with ants; the Venezuelans with mosquitoes and cats with the French. Death by coffee is mentioned. When the deer suddenly switch sides, it’s enough to provoke a bitter argument between Harper and Todd. But although the content of the play is mind-bogglingly bizarre, the patterns of thought are disturbingly familiar. The bigotry, twisted reasoning and blindness to horror are all too human.

This production, directed by Kate Hewitt — winner of this year’s James Menzies-Kitchin Award — has a traverse staging in the Young Vic’s small Clare studio. Designed by Georgia Lowe, on a bare wooden platform, this revival doesn’t quite capture the wildness of the writing. At one point, the play’s procession of doomed prisoners is so abstract that unless you know the text you might well be puzzled by what’s going on. The solid cast is Tamzin Grifffin as the matronly Harper, Ariyon Bakare as the earnest Todd, and Samantha Colley as the idealistic Joan. Far Away is a fabulously written gem that questions, in a witty and fascinating way, our complacent idea that atrocities only happen far away and long ago.