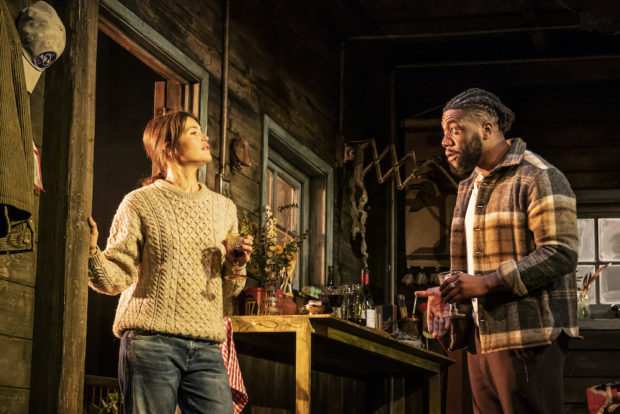 There’s something definitely inspiring about producer Sonia Friedman’s decision to reopen one of her prime West End venues with a season, called RE:EMERGE (lovely capital letters!), of three new plays. The first drama is American playwright Amy Berryman’s ambitious debut, Walden, and this will be followed later in June by Yasmin Joseph’s J’Ouvert and then in July by Joseph Charlton’s Anna X. With top directors and excellent casts, this is a vote of confidence in the power of new work from one of our best producers. Berryman’s Walden, for example, is directed by Ian Rickson — who curates the season — and stars the ever-watchable Gemma Arterton.

Set in a remote timber cabin somewhere in north America, a few years into the future, the play opens with Stella (Arterton), a former NASA space architect, and Bryan, a mild eco-warrior, waiting for the arrival of her twin, Cassie, a NASA botanist who has just returned from a ground-breaking one-year mission to the moon, where she has successfully managed to grow plants for the first time. The reunion of the twin sisters is somewhat muted due to their estrangement and to the conflict between their different life choices, and politics. While Stella and Bryan are trying to save the planet by living a low carbon existence, Cassie is heading the exploration, and exploitation, of the moon and Mars.

In a 105-minute play packed with ideas, the central conflict about humanity’s future is well articulated: should we be spending billions of dollars on colonising space (yes, the echo of imperialism on Earth is deliberate) or should we spend these resources on creating carbon-neutral environments on our own planet? For Cassie, and NASA, it is already too late to save Earth, a point emphasised by news of a mega-tsunami that has buried Sri Lanka, but this is contested by Bryan, who is an Earth Advocate, and whose movement of like-minded citizens is reclaiming large tracts of the United States from climate disaster. All this is given a personal touch when it emerges that the sibling rivalry between Stella and Cassie has been long in the making.

As two daughters of a pioneering space scientist, they have been brought up to walk in their father’s cosmologically defined footsteps. The irony is that, although the women are identical twins, their psychological make-up is different, and this has affected their physical performance. So while Stella was always the one who was groomed to lead space projects, her physical failures have resulted in her leaving NASA, even though her bosses have decided to use her designs for a space station. By default, Cassie now finds herself in a leading position on a new space mission. But is this what she really wants to do with her life? In this play, colonising the solar system means giving up ordinary human relationships — and the chance of having a family life.

Although Stella feels rejected by NASA, and angry about how her lifelong expectations have been overturned, she looks forward to having a child (only one because of over-population) with Bryan. This rather schematic and simple opposition — which reminds me of some of Peter Shaffer’s dramas — between duty and family, space exploitation and saving the planet, big money and little lives, has its own political implications. Is Berryman really saying that women in the future will have such stark choices? Isn’t it possible to have a NASA career and a family life? Can’t saving the planet involve fun as well as work?

Like many other young American playwrights, Berryman is also a bit too polite in her writing (just count the times her characters say “sorry”). They really do an awful lot of apologizing, and their desire to see the best in everyone, to be good people, feels both like political correctness and a kind of puritan sense that we have to combat badness in the world, in both thought and deed. The upshot of this attitude is that the dramatic conflicts between the characters never quite catch fire emotionally. The potential for a love triangle fizzles, but doesn’t burst into erotic flame; the antagonism between the twins never really explodes; the influence of their distant father figure is never demolished.

So Walden, which of course includes some good speeches about Henry David Thoreau’s book, whose subtitle is Life in the Woods, as well as some other fine passages, has too many ideas, but not enough raw emotion. This playwriterly restraint is also reproduced by Rickson’s rather constrained production, which is designed by Rae Smith, whose log cabin positively sighs with the smell of burning wood. The cast — tentatively brittle Arterton is joined by well-grounded Fehinti Balogun and faintly troubled Lydia Wilson — seem oddly unengaged, muted and their interactions smoulder without reaching full burn. What this play needs to lift off is a booster rocket. As it is, it’s good, but unexceptional.