About Six Degrees of Separation 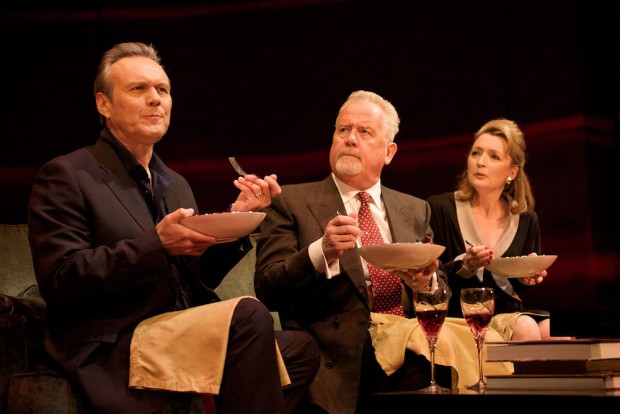 Yesterday, I revisited an American play I really enjoyed when I first saw it almost 20 years ago: John Guare’s Six Degrees of Separation, now revived at the Old Vic. It premiered at the Royal Court in 1992, and is full of lines like “When artists dream, they dream of money.” Inspired by the true story of a con artist who fooled wealthy Manhattan residents by posing as the son of Sidney Poitier, the plays buzzes with ideas about identity, celebrity and class division. A collage of neat stories about the superficiality of our times, the play itself is a rather tricksy, if occasionally resonant, account of the effects of an economic bubble. When New York socialite Ouisa, played with integrity by Lesley Manville, says that only six people separate everyone on the planet, from street-cleaner to President, the intellectual appeal of the idea — and its silliness — sum up the limits of her world. But Guare makes the outsider Paul — embodied with terrific charm and energy by Obi Abili — into more than a cipher: he is a wake-up call for a whole nation. After an unengaging start, David Grindley’s poorly lit production hits its stride about halfway through, and both Manville and Anthony Head, who plays her husband, manage to convey the emptiness at the heart of their lives. With good support from Sara Stewart and Steven Pacey as their noisy neighbours, the play develops into a symbolic account of American family life. But its star is Abili’s Paul, who plausibly passes himself off as their children’s friend, amusingly impersonates Poitier and then mesmerizes the audience with his moving portrayal of a lost soul on a journey to nowhere. In the end, the play is not very persuasive, but his performance is.