This Will End Badly, Southwark Playhouse 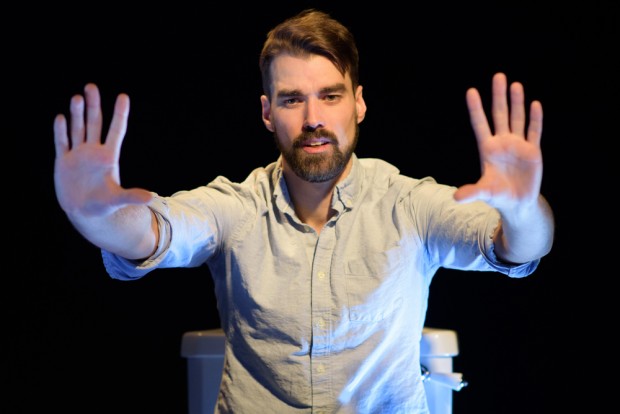 You have to admire Rob Hayes’s choice of titles. I missed his 2011 play, A Butcher of Distinction, but its name caught my eye. So although his latest doesn’t quite have the shock value of Awkward Conversations With Animals I’ve Fucked, his 2014 Edinburgh Festival hit, This Will End Badly is certainly full of enough foreboding to wipe any superficially optimistic grin off your face. First seen at Edinburgh last year, this one-man show is characterised by its vivid language, harsh humour and fury of delivery in Ben Whybrow’s exceptionally winning performance.

Under the feeble glow of a single lightbulb, which is somewhat lost among the array of theatre lights, Whybrow plays three characters, who could also be aspects of a single character, and who are specified by personality traits: the loud and confident Meat Cute picks up women in bars and clubs and has worked out an elaborate series of cynical tactics to get laid; the sad and saddening This Pain once had an ambition to write music for television adverts, but gradually becomes so paralysed by Obsessive-Compulsive Disorder that he can hardly leave his flat, with the result that he’s running out of food; the hurt and pining Misery Guts has just broken up with his girlfriend, and is suffering from a chronic case of complete constipation that gradually grows to hilariously epic proportions.

Hayes has a gift for images, and for the insecurities of masculinity: the shit that accumulates in the bowels of Misery Guts not only “feels like a family of mice in my colon”, but also serves as a stinking great metaphor for the emotional waste that has build up over the years. When it emerges that he talks to a graffiti that someone has drawn on a toilet wall, this comes as little surprise. Meanwhile, This Pain needs constant repetition to survive the day-to-day. He counts obsessively, he shops for food but cannot eat, he imagines people dying of poisoned food, he can’t use light switches, he obsessively closes his front door. He fantasises about strangling his girlfriend with the belt of a dressing gown.

At first, Meat Cute seems to be in a better place. He merrily chats up women with the appetite of a wolf and the intelligence of the born seducer. This cut-price Don Giovanni is clever, manipulative, in control. Frighteningly in control. He also has an amusing penchant for the lower back of women’s legs, the bit next to the ankle. You can’t help but smile. Then, as the word “rape” explodes across the almost bare stage, his calculating charm feels less charismatic and a sense of disapproval and disgust begins to grow. He is perfectly clear about his mission: it is to dominate women. Yes, this is a play about masculinity, but it is definitely masculinity in crisis. Every stride in the story is a step towards suicide, and the bleakness of this feeling of loneliness and despair infects the evening like an incurable STD.

The play is co-produced by the Campaign Against Living Miserably (CALM), a charity that works to prevent male suicide, and the programme quotes some shocking statistics: in 2014, men accounted for 76 per cent of suicides, and males under 45 are the group most at risk in the UK. Although a work of fiction can’t solve social or emotional problems by itself, it can give audiences a powerful sense of the personal issues at stake, and Hayes provides an unforgettable anatomy of sorrow, as well as just a touch of hope about the possibility of a happier outcome.

Clive Judd’s production, designed by Jemima Robinson, with its platform stage and its sole white toilet, allows Whybrow to prowl the intimate space with a command of the rapid-fire monologue that is simply transfixing. He fields three different characters, subtly changing accent and posture for each one with mind-boggling speed and intensity. He talks directly to individual audience members, especially women in his Meat Cute persona. In this performance there is danger, there is discomfort, there is an inner feeling of delirium. By the end, as the foam flecks his lips, a suggestion of cure and of redemption lifts the spirits as this superbly bold and dark 60-minute masterpiece of new writing does a handbrake turn and squeals to a surprising halt.