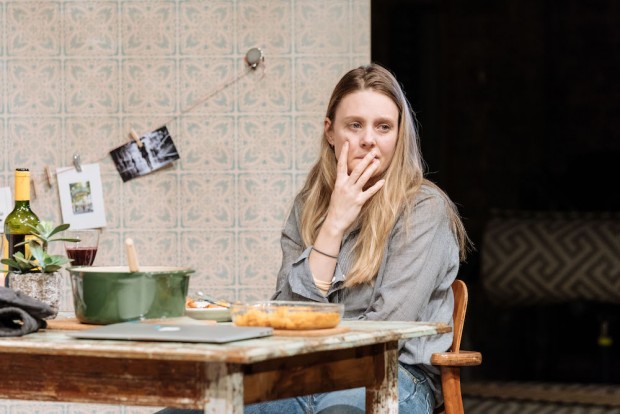 Is there such a thing as female writing? In the 1980s, a group of women writers emerged who expressed their sense of lived experience through plays that challenged the tradition of linear drama by fracturing the time sequences of their stories. Examples include Caryl Churchill’s Top Girls and Charlotte Keatley’s My Mother Said I Never Should. In the past two decades, women playwrights have mainly stuck to linear narratives and social realism. But this may be changing: the recent work of Alice Birch or Elinor Cook or Nina Segal or Adura Onashile or Sophie Wu shows a willingness to experiment with form, and this is also apparent in The Writer, Ella Hickson’s latest.

Over five interconnected scenes, which run without a break for two inventive hours, a woman writer confronts the theatre establishment, and especially the men who tend to run things. In the opening sequence, a Young Woman (Lara Rossi) returns to the auditorium after the end of a play to get her bag when she accidentally runs into an Older Man (Samuel West), the director of the show she’s just seen. And she didn’t like it. She says that it was clunkily naturalistic, overtly sexist, badly acted, laughably unrealistic and politically docile. And it had a crowd-pleasing dog and a real baby on stage. So she’s angry. Very angry. But eloquent too.

Of course, the Older Man responds with wry bemusement, fake hurt and manipulative charm. And then he invites her to write a play for him. What he doesn’t realize is that they have already met, in the kind of situation familiar to anybody who’s aware of the #MeToo movement. Young Woman is a writer and her experiences, which include being told to “stop playing the victim”, fuel her passionate desire for theatre to be something much more than it is today. She wants it to be a “sacred” space, and writing a religion. She wants to “Dismantle capitalism and overturn the patriarchy”. She passionately wants to change the world.

While this scene sets the tone for the rest of the evening, it is a play within a play. In its second part we watch an audience Q&A with the actors playing Young Woman and Older Man, who are joined by their Director (Michael Gould) and their Writer (Romola Garai). The following scene shows the home life of the Writer and her Boyfriend, as they argue about artistic integrity and commercial success. A real-life baby is brought on stage. Then, in a scene called “The Provocation”, Hickson imagines staging “female experience” by using the device of a full-blown tribal fantasy world. Then we’re back to the Writer and Director, and finally a re-run of the Writer’s heterosexual relationship, but this time as a lesbian — and with a reversal of the power dynamic.

The Writer is both a play about sexual politics in the theatre, and a show about the politics of playwriting and staging fiction. Its emotional fuel is anger about male domination of the world, and a certain bitter despair about how this abusive power seeps into all of our heads. Male as well as female. And the pressure that many women feel: to do what’s expected of them; to be successful on someone else’s terms; to have babies. The fractured form of the story reflects the fact that Hickson avoids easy answers and offers no solutions. Power is everywhere. And everywhere makes sorrow.

Even the utopian moments of the play are fictions, or research on the path to writing theatrical fiction. Yet the anger expresses itself with an urgency that should make us question our own complacency. After all, if it seems a bit unreasonable to expect theatre to change the world, surely it is good that it at least voices criticism of the status quo. And that’s what The Writer does so well, while making knowing references to other work such as Tom Stoppard’s The Real Thing and Laura Wade’s Posh (and Consent and The Curious Incident of the Dog in the Night-Time). Typically, it also shows us that the desire to change the world usually turns into the desire to change our sexual relationships, which seems easier although, as Hickson demonstrates, this also has its own problems. Its own scalding tears.

The two sex scenes in the play, which mirror each other, illustrate how power pervades even the most intimate of human relations. They also emphasize both the provocation of the writing and something of its wry archness. Each episode make us reconsider the previous scene, although at the end of each there is also a real sense of loss. The Writer has warmly seduced us, only to throw us out into the cold. The knowing way in which Hickson offers us samples of female fiction — the opening passionate rant and the atmospheric fantasy sequence — and then criticises them by means of the male Director, is constantly stimulating, although maybe a bit irritating too. It’s all sooo meta-theatrical, darling.

In the end, I left the theatre with a lot of questions buzzing around my head. How much power do men have over female artists? Is all good art subject to commercial pressures? Does truthful art have to be created in pain and poverty? Is a utopian alternative possible? And should it be, for women, a lesbian one? And what about power relations in a lesbian couple, not to mention race… Director Blanche McIntyre’s brilliantly acted production offers wit and clarity, with Garai and West particularly impressive in the range of their emotional responses. Likewise Rossi and Gould are utterly convincing. Along with Anna Fleischle’s neat designs, they make a strong case for theatre as a place to debate the most urgent issues of the day and prove that, for some women, experimenting with form is not an option, but a necessity.