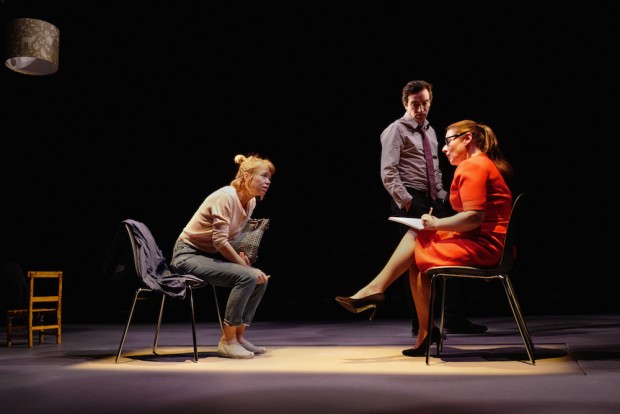 Rape is such a serious social issue that it’s hardly surprising that several recent plays have tackled it. I’m thinking of Gary Owen’s Violence and Son, James Fritz’s Four Minutes Twelve Seconds and Evan Placey’s Consensual. All of these discuss, whether implicitly or explicitly, the notion of consent, which is the name of playwright and director Nina Raine’s latest drama about the subject. As staged at the National Theatre by director Roger Michell and starring his wife Anna Maxwell Martin, this promises to be a thrilling evening.

And it doesn’t disappoint. Immediately we find ourselves among the comfortably well-off, the hard-working and the privileged — the metropolitan elite. Thirtysomething friends Edward and Jake are initially cheerful but cynical barristers, and they are celebrating the birth of a new baby to Edward and Kitty (Maxwell Martin). Jake and his wife Rachel, another lawyer, are their oldest friends, and life looks sweet. They also know the single and rather lonesome Tim, yet another lawyer, and zany Zara, an actor. When Edward and Tim take up briefs on opposite sides in a rape case, the relationships of all involved come under strain.

The case itself concerns Gayle, a working-class woman who has clearly been abused and who is too angry to care about the arcane correctness of legal procedure. She just wants justice. Maybe even revenge. Like a Fury from an ancient Greek tragedy, her anguish is a ragged howl from the night, a pitiless cry of pain and rage. But if the legal system cannot be guaranteed to help her, what about its effects on the lawyers who are meant to make it work? When Rachel accuses Jake of having an affair, sexual politics is no longer just a case to be argued over in court — it comes barging into this couple’s nice middle-class home.

Raine’s compelling play features some excellent scenes that explain the mechanics of justice, how the adversarial system of confrontational cross-examination in court depends on cool techniques which can only be mastered by the exceptionally gifted. Who tend to think of them as a game. Where only winning matters. But she also delves deep into the troubled psyches of those lawyers and their spouses. At one point, a sexual encounter is dissected with a logical scalpel that is twisted between two opposing points of view. The fate of Gayle matters much less to them than the disruptions caused by adultery in nice middle-class families. And when Zara introduces the subject of acting in ancient Greek tragedy, the key themes of the play — betrayal, punishment and forgiveness — heave into view. The minute that Tim describes tragedy as “two opposing characters holding two relative but mutually destructive truths” you just know that things will end badly.

There is a well thought out contrast here between the linguistic niceties of courtroom tactics, and the emotions, or lack thereof, of the barristers. What begins by seeming to be a story about a working-class woman who has been assaulted, and is terrified of her attacker, ends up as a case of marital rape involving middle-class professionals, and the escalation of their infidelities. It’s as if all the emotions that have been bottled up in the courtroom are suddenly released in the bedroom. The central ambiguity of the apparently simple concept of consent comes across very strongly, as does the notion of redemption through forgiveness. But where, asks Raine, does our sense of justice and right come from? Is it from empathy, or from reasoning? And how do we punish wrong-doing?

Together, Raine and Michell find a really good balance between such cerebral discussions and comic relief. Whenever the word rape explodes on the stage, there’s always a joke close behind to soften the effects of the shrapnel. Like Patrick Marber’s Closer, which Consent occasionally resembles, the main tussle here is over love, and the organ that gets most damaged is not the genitals (despite some references to stretched vaginas, blackened penises, intimate warts and STDs), but the human heart. And as the mind games twirl, and the emotions of vengeance twist and turn, all of the characters are revealed as equally troubled. And none of them can really get justice, not even of the poetic kind.

Powerfully written, compelling to watch, and both entertaining and thought-provoking, Consent is only slightly marred by having almost too much content, almost too much to say (lots of stuff about living in London, poltergeist as a metaphor for desire, even a real baby on stage at the start). Michell’s excellent cast is led by Maxwell Martin, who conveys deep feeling even when she’s at her most skittish, and Ben Chaplin, who was so convincing as the slippery character in the BBC’s recent Apple Tree Yard and here plays Kitty’s equally slippery husband Edward. Adam James plays his friend Jake, and Pip Carter is Tim. Priyanga Burford’s Rachel and Daisy Haggard’s Zara are slightly underwritten, while Heather Craney’s Gayle is more symbolic than real. In a gripping production, co-sponsored by Out of Joint, set designer Hildegard Bechtler creates little concertos with an array of lights and lampshades, while the Dorfman’s subterranean lifts work overtime in the smooth scene changes. So what’s the verdict? Guilty of being a good night out.