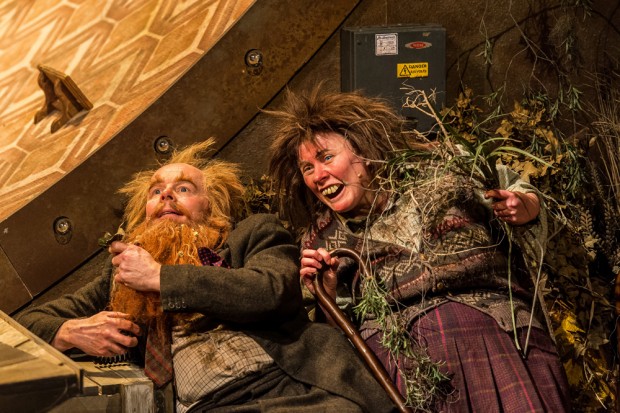 The Royal Court has had a makeover. Recently, the walls have had a fresh coat of paint and huge messages have appeared on them: the front doors now say, “Come In”. (Oh, thanks for telling me…) Inside, there are so many arrows pointing you to the stalls, circle and bar that sometimes it seems like these places are harder than ever to find. In the foyer, you can read a wall message about the need for fundraising, facts about how big audiences were last year, and how many watched a show in school (a measly 2500). The theatre fabric is now the marketing department’s dream, but what about the new show?

After the soaraway success of the first Roald Dahl adaptation, Matlida the Musical, every theatre has been looking for the dream show that unites adults with children, and the publicity for The Twits mischievously reads: “Age guidance: for brave 8-year-olds and their families”. Added to this, the theatre is hyping up lots of appealingly juvenile activities around the show — as in “Grow your own Twit-worthy beard… in our online Beard Booth” — so you could be forgiven for expecting the worst.

If so, you’re in for a nice surprise. Enda Walsh, whose recent work has included both the West End hit Once and the more obscure Ballyturk, adapts Dahl’s The Twits with a vigour and theatrical imagination all his very own. If he doesn’t produce a faithful adaptation of the original book, I can’t say that that matters one jot. His story starts with the two posh gits Mr Twit (dirty red beard) and Mrs Twit (one glass eye), who not only beat each other up, but also keep a family of Welsh monkeys in a small cage. They are gloriously, uproariously, unpleasant people. On a fabulously decayed and dirty set, designed with breathtaking flamboyance by Chloe Lamford, the Twits exercise their regime of animal and human cruelty.

When they invite a trio of Yorkshire fairground folk — Terrier Man, Handsome Waltzer Boy and Tattooed Fortune-Teller Lady — to come to a garden party, the opportunities to humiliate their guests multiply. Having in the past been cheated of their fairground, the three now have nothing but their 1960s caravan (surely a reference to Jez Butterworth’s Jerusalem), and their secrets – which are mercilessly exposed by the evil-minded Twits.

Walsh’s cogent version is a neat recitation of the terrible experiences of the fairground threesome, whose stories are acted out by the monkeys who follow a script written by Mr and Mrs Twit. The style is wonderfully grotesque, gothic, absurd and sinister: bones crunch, stuffed magpies hang from trees, monkeys are forced to stand on their heads. At one point, the Christmas dinner features Rudolph the red-nose reindeer – as a main course; at another, the Queen’s Christmas message is parodied. A dog called Baxter is poisoned. Worm spaghetti and crazed screams abound. There is dancing, singing and some lip-lickingly delicious music by Martin Lowe.

But as well as being sharply satirical, beautifully bizarre and extravagantly entertaining, The Twits is also unashamedly romantic. The climax comes as the monkeys decide to revolt against their oppressors, expressing not only a universal longing for home but also a desire for freedom. I could feel myself starting to tear up. There’s even a speech about joy and love and community. And, on stage at least, the world is turned upside down, a strong metaphor for the possibility of political change.

Director John Tiffany delivers a magnificently over-the-top show, with fantastic special effects and thrilling onstage zaniness. As Mr and Mrs Twit, Jason Watkins and Monica Dolan are a revelation: they convey the sheer joy of misbehaviour and a delight in humiliation that is both comic and monstrous at the same time. And there’s great support from the rest of the cast, who portray the lovely monkeys and the quaint fairground folk. It’s all so silly it’s brill. I didn’t think I was going to like this show, but I ended up loving it.