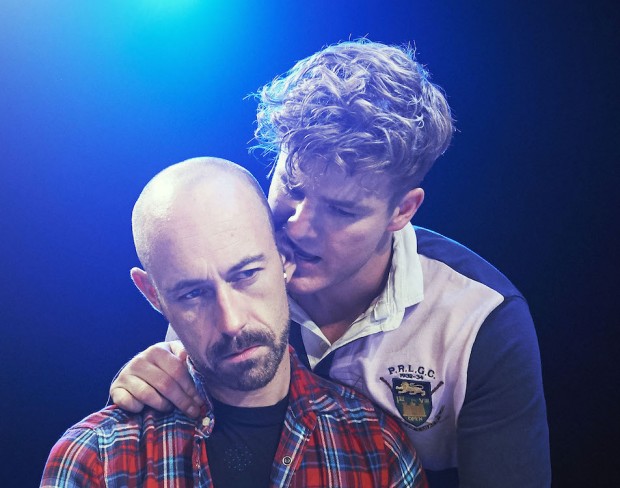 Following no less than three smash-hit, sell-out runs in London and at the Edinburgh Fringe, the King’s Head Theatre production of Joe DiPietro’s Fucking Men, or F*cking Men (as the publicity calls it), now transfers to the Vaults Theatre in Waterloo for an initial five-week run. It’s clearly been around long enough to attract attention. But, apart from the explicit name, what’s it all about? Well, the title speaks volumes actually because the play is based on the daisy-chain sexual encounters of Arthur Schnitzler’s 1900 classic, La Ronde, except that here the action is transposed onto the gay community. So this tale of loveless and loving couplings is not particularly original in form, but what about its message? What does the play have to say?

Just like La Ronde, Fucking Men is a series of sexual encounters between two people, one of whom then appears in the next bout, until we end up — some 10 scenes later — back with the first character we came across, in this case a 23-year-old rent-boy aptly called John. So DiPietro offers us a panorama of gay life, which includes, rather predictably, a soldier who likes sex with men but denies being gay; an English Literature tutor; a bi-sexual student with pushy parents; an older couple who have an arrangement that allows each to have sex with strangers; a porn star; a playwright; a star actor who wants to come out; a television journalist — and then we are back with John.

Amid the coupling, there are moments of talk, sometimes humorous, sometimes déjà vu, never really surprising. The uni student boasts of having a big dick; sex is described as “fan-fucking-tastic”. One of the benefits, says someone, of being gay is that you don’t have to be monogamous. The portrait of the playwright is self-reflexive in a postmodern kind of way. Several characters say that it’s best to be honest, and then proceed to lie. There is more meaningless sex (whatever that is) than joy of sex (whatever…). One character wants to talk, another doesn’t. Some chat because they are nervous, others because they are dickheads.

DiPietro crams a lot of issues into the tight pants of this story, which runs barely 90 minutes, but despite his ingenuity the same situations keep cropping up. There’s a longing for connection, for love. Yet most of men experience loneliness and the corrosive effects of lying. Promiscuity seems like a poor substitute for a steady relationship, although the boredom of staying with one partner for decades is also strongly stated. Occasionally, the threat of HIV-AIDS is mentioned. In every encounter, anger and violence is a constant presence, and occasionally explodes. Moments of sudden generosity compensate for the misery of debilitating solitude.

The problem is that the play’s format soon becomes tedious, with the same situations cropping up over and over again. Despite some more edgy insights, as when a lover confesses to thinking about other bodies when making love to his partner, much of the action is repetitive and over-familiar. Sadly, the play has nothing really new to say. Still, Mark Barford’s production flows smoothly and efficiently on Jamie Armitage’s bare set, with its simple and versatile props. The sex is discreet and the acting good: the cast of three — Richard De Lisle, Harper James and Haydn Whiteside — play some 22 or so characters, a few of whom come across vividly. But although many of the dialogues are brightly written, the ending is too sentimental for my taste, and I fear that this will remain a cult gay play rather than breaking into the mainstream.