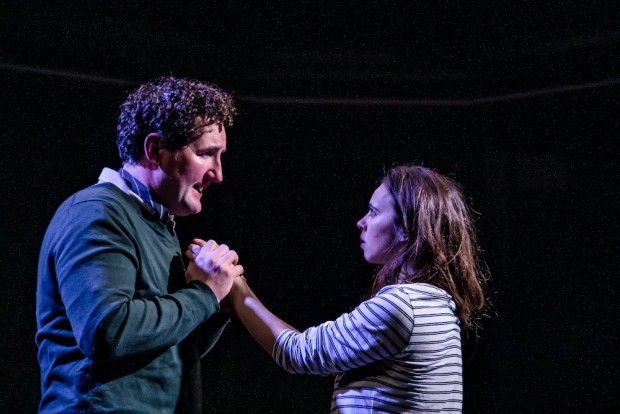 Your sweet tooth can get you into trouble. Lots of trouble. In this revival of Lucy Prebble’s provocative debut, first staged at the Royal Court in 2003, the metaphor of sugar, and of the powerful attractions of this drug-like substance — bad for you, but providing an instant hit — is explored through a disturbing story about paedophilia and the internet. Since writing this play, Prebble has gone on to create large-scale contemporary classics such as Enron and A Very Expensive Poison, but, with the exception of The Effect, none of her later plays match her first one for sheer emotional intensity.

The story is every parent’s nightmare: Dani is a bright 17-year-old with an eating disorder. She also has family problems. She says she hates her mum, Jan, and rarely sees her dad, who is a media big shot and never at home. Scorned by other girls at college, Dani is a lonely soul who sees the digital world — with its chatrooms, freedom of sexual expression and invented identities — as a place where she can meet people to soothe her sense of solitude. So she searches the internet — and meets two very different men. One is 22-year-old Lewis, a nerdy loner and wannabe music journalist, and the other is 38-year-old Tim, a charming ex-teacher who struggles to control his paedophile instincts. He’s been in prison for molesting boys, and who knows what he’s got on his laptop?

Dani meets both men in the real world as well as the digital one. These encounters are awkwardly embarrassing, with one excruciating sex scene, but feel very real and suggest the strong need for human connection. But although we might expect that she is the victim of a predator such as Tim, Prebble is careful to avoid clichés. When they meet, it is Tim who is disappointed: from her chatroom messages, he was expecting to encounter an 11-year-old boy. Despite the awkwardness of their meeting, Dani sees in Tim a kindred spirit. He interests her. After all, she knows what it is like to be an outsider. She can sense his loneliness and vulnerability. To her, he appears to be more or less harmless. A victim as well as a perp. Needless to say, she is being set up for a very big disappointment.

Prebble writes about perverse behaviour with intelligence, vigour and energy. Like Edgar Allan Poe’s short story, The Imp of the Perverse, she not only shows the attractions of what is bad for us — following the sugar metaphor, one hit requires another, and another, and another — but also its emotional costs. So although this is a journey into the murkier recesses of the human heart, Prebble takes us there with considerable charm and humour, as well as the odd splash of vulgarity. Although some passages suggest that the playwright is over-anxious to discuss too many issues, there is a strong feeling of emotional truth, especially in the scenes when Dani talks to, or ignores, or berates her mum. (Look out for the hilarious Pilates sequence.) For new writing buffs, there’s even a glancing reference to Sarah Kane’s Blasted. On the downside, the play is stronger on situation than on plot.

Never mind. Anyone familiar with the TV hit Succession, which Prebble helps produce and occasionally writes for, will recognize the edginess of this play. In defiance of convention and received wisdom, it shows how unsuitable relationships can not only attract opposites, but also create unexpected kinships. Like some other examples of 2000s new writing, it also carries the sharp tang of desire, in all its wayward wantonness. There’s a real understanding of how hard it is to struggle with repetitive behaviour. It discusses feelings of shame and guilt without being censorious, and the jokes are great. I also love the scene in which Dani and Tim dance slowly and tenderly to Bob Dylan’s “A Simple Twist of Fate”, an apt hymn for this odd couple.

Director Oscar Toeman and designer Rebecca Brower bring the pre-broadband age alive on stage by using the bygone sounds of a dial-up modem, but they avoid screens and opt instead for tracks of light that dash around high above the simple sunken gloss-black stage. In a production which respects the difficult pauses of the text, as well as its moments of full-on comedy, Jessica Rhodes is wonderful in her stage debut, bringing out Dani’s sulky petulance and juvenile gestures as well as her cheekiness, perceptiveness and capacity for empathy. As her mother, Alexandra Gilbreath is convincingly puzzled and needy, while John Hollingworth (who is also a fine playwright) gives Tim a nice mixture of sternness and vulnerability. Likewise, Ali Barouti’s Lewis is both brash and gawky. All in all, this is a really excellent revival.