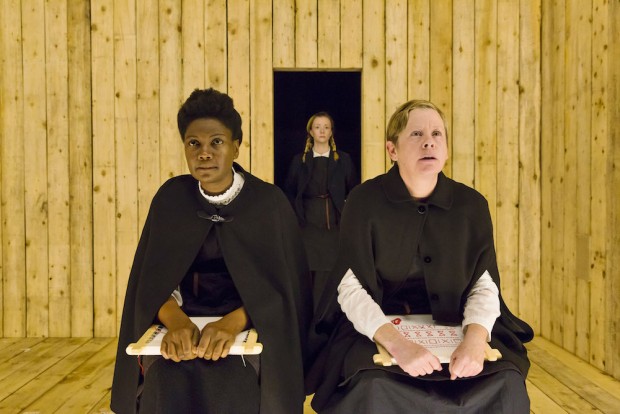 The beauty of the past is that it’s a foreign country, and you don’t need a visa to visit it. With the free movement of the imagination you can conjure up life as it might have once been experienced. You can even join a re-enactment society. In the theatre, the evocation of a pre-industrial landscape has a noble lineage, with outstanding examples such as Sue Glover’s lyrical Bondagers (1991) or David Harrower’s haunting Knives in Hens (1995) always there, on the far horizon. Now it’s the turn of EV Crowe to journey to this enchanting location, and to tell us a bit about what she finds there.

The Sewing Group begins with two women stitching in a rather desolate room, all wooden planking, with only a single candle for light. Outside, there is the sound of wind blowing. It is a simple lifestyle, and the women don’t even have names. Yes, it’s a fantasy of some pre-industrial past, maybe — judging from the clothes — the 17th century. From somewhere nearby a newcomer arrives. She is, we later learn, Maggie. A young woman with bright ideas, she at first conforms to the olde world, with its pastors and livestock, as she finds it. It’s a lifestyle where a single fart is an event in itself. Indeed, the atmosphere is oppressive — it feels as claustrophobic as the Big Brother house.

Gradually, Maggie starts to question the status quo, and then introduces elements of ambition and competition into this idyllic society. She invents a new ritual for mourning the loss of a husband, and she innovates in the realm of sewing. It begins to look like a power grab: is this a metaphor for the transformative power of industrialization, which destroyed the rural societies of the globe? Well, yes, and no. From the off, Crowe offers us clues in her use of language: some risibly cod 17th-century phrases (“the winter cometh”) co-exist with contemporary business lingo (“task orientated”).

So what’s going on? As the low-key drama flips into an enjoyable parody of a detective story, Crowe artfully and cleverly keeps us guessing. Slowly, from the shadows, come the larger themes, and they gather around the fire. The Sewing Group is not only about the simpler life of the rural past, but also about our longing for a world without digital distraction, without stress. The play asks us to dream, just for a while, about what it might be like to live without our gadgets, to take a rest from the relentless pace of everyday urban life. Yet it also shows how such desires are linked precisely to our advanced capitalist system. And to our capacity to pay for them. In the past, these ideas simply wouldn’t have made sense.

Director and designer Stewart Laing’s careful production treats Crowe’s imaginative vision with enormous respect, but it occasionally feels as if the result is like walking on egg shells. Fiona Glascott’s Maggie is a clenched fist of emotional repression, and her breakout is impressively controlled. The trouble is that this character is not very attractive, which leaves an emotional hole at the centre of the play. Playing the other women, Nancy Crane, Jane Hazlegrove, Sarah Niles and Alison O’Donnell are similarly effective, and John Mackay’s pastor has a dictatorial stillness. The short scenes, with blackouts and harpsichord soundtrack from Christopher Shutt, have an otherworldly quality. But, after its well-prepared revelations, the 85-minute play becomes a bit fuzzy and loses focus towards the end, and it finally feels a bit flabby when its story begs to have been tighter. With its nods to Westworld, it remains an intriguing experience, if a slightly frustrating one.