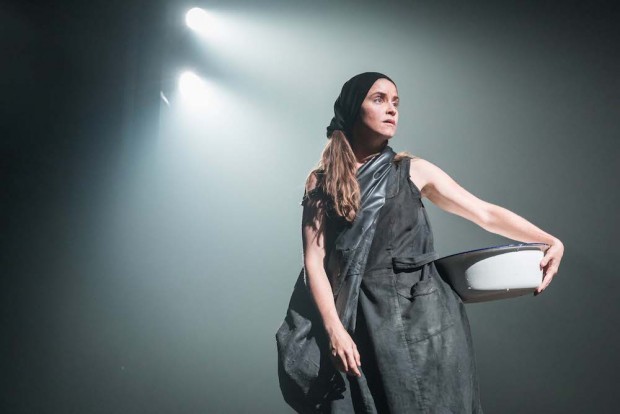 Hark, is that the call of the earth I hear? In a frenetic urban world, the myth of rural simplicity exerts a strong pull. Surely a simpler life is possible; a more natural rhythm and a slower pace? Oh yes, I can certainly smell burnt peat, and almost scent the deep ploughed soil and farmyard animals, as I walk into the Donmar Warehouse for this dark revival of David Harrower’s 1995 masterpiece, Knives in Hens, directed this time by Yaël Farber. But this story from a mythical old agrarian world is not a nostalgic evocation of the past. It is much more gnarled than that.

Set in a stretch of unspecified countryside, at an unspecified time in the pre-industrial past, where there is just a village, some fields and a mill, the story concerns three people: Pony William, the village ploughman, his wife, known only as Young Woman, and the local miller, Gilbert Horn. William labours hard, and keeps his wife on a short leash, helped by the fact that she believes in God. When she takes five sacks of grain to Gilbert to be milled into flour, local superstitions about his devilish nature jump out from the dark. Because he reads and writes, he is seen by the villagers as a demon who has magic powers. But she is strangely drawn to him.

This is a play about Young Woman’s search for her own identity, and shows how she makes sense of the world by learning to use words. At the start, she is confused because she cannot understand metaphors and similes (when her husband compares her to a field, she thinks “If I’m like a field must be a field”). Gradually, she successfully struggles for articulacy and self-expression, learning along the way how to handle the horses her husband seems determined to keep her away from. She also learns to trust Gilbert, who shows her a way out of the small universe of the village.

With its dreams, nightmares and moments of epiphany, this is an extremely difficult play to stage convincingly. Harrower asks us to believe that the Young Woman has learnt to write, even though she doesn’t really understand the use of words, and that she can master the pen as well as the stub of chalk. Perhaps the story is best understood as a highly symbolic fantasy that unfolds slowly, a bit like the thin cascades of flour that pour down every now and then in Farber’s production. It’s a dark fantasia that leads to knowledge, but also to death and guilt. To new desires and new understanding.

Harrower conjures up a world of grim belief, where the Young Woman thinks that God does everything, until she stumbles on a different reality. Her husband, meanwhile, wrestles with her beauty, seeing God in His creation, that is in her beautiful body. But when he asks Gilbert to look at her sleeping form, he provokes a fatal reaction. For the miller, who was married once and is now a widower, responds unexpectedly to the image of carnal delight that William plants inside his head. Once again, words are like daggers — dangerous.

Finally, this is a story of how you can use words to lie. To create false realities, to form fictions and fantasies. As Young Woman discovers a feeling for nature, and matures in front of us, she also learns how to tell untruths. Her innate perceptiveness grows into a new worldview. One that she can more confidently control. On Soutra Gilmour’s dark set, dominated by a huge and elaborate milling stone, Farber retells this tale by emphasising and empathising with the passions of the characters, connecting more with their feelings than with the spare poetry of the piece’s language.

At the start, Farber begins by showing the agrarian heavy labour of the ploughman and his wife, her plucking a hen and him dragging the sacks of grain. She then shows their quick, brute copulation, and carefully and naturally illustrates the daily rituals of washing and eating. This stress on everyday reality comes at the expense of some of the symbolic language of the story. Farber imposes a naturalistic aesthetic on a non-naturalistic play. But if I’m not really convinced that Farber has found a strong enough stage language to convey this expressionistic play, most of the acting is good. Judith Roddy’s Young Woman grows visibly in her linguistic confidence, while Matt Ryan’s self-possessed Gilbert contrasts well with Christian Cooke’s more shifty William. Although not all of the dialogues are spoken clearly enough, this atmospheric production does, at its better moments, successfully traverse the liminal space between dream and reality.