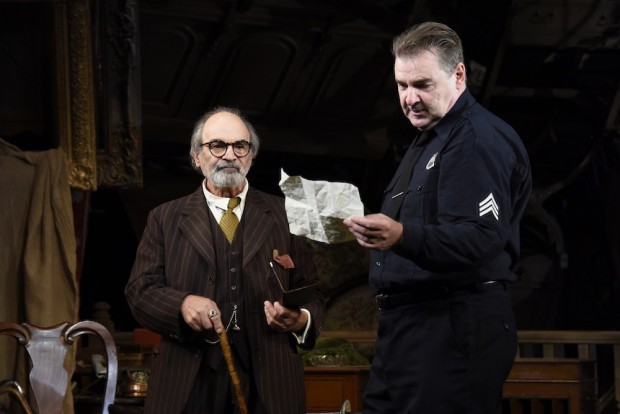 All hail Arthur Miller, chief of London’s modern revivals this year. Which is odd, given that 2019 is the anniversary of neither his birth (in 1915) nor his death (2005). Never mind, theatergoers now have a good chance to revisit his various explorations of the American Dream. Would you like to see All My Sons? No problem. How about Death of a Salesman? No problem. Or The Crucible? No worries. Then there’s the appearance of some lesser known plays, such as The American Clock (1980), at the Old Vic, and The Price (1968), at the Wyndham’s, all of which suggests that we are in the middle of a festival devoted to the playwright. So for my first expedition to the United States of Arthur this year I’m seeing The Price, which has transferred to the West End from Bath Theatre Royal, where it opened last year, and boasts David Suchet and Brendan Coyle as its stars.

Set in the furniture-choked attic of a New York brownstone, which was once the Franz family home and is now just a storage space in a building due for demolition, the play begins by introducing us to Victor Franz. He is a NYPD sergeant, almost fifty, and married to Esther, a smart but disillusioned woman with a bit of a drink problem. The dynamic between them is full of her recriminations about his lack of ambition, and her wish that he retires from the force to re-train for a more managerial job. Their bickering is interrupted by the arrival of Gregory Solomon, an octogenarian Russian-Jewish second-hand dealer, who has come to value and buy the family furniture. He is a larger-than-life creation, whose amazing life story opens the vistas of our understanding of not only the Jewish diaspora, but also of the multicultural character of New York in the 1960s. As they argue about the value of family heirlooms, an unexpected visitor arrives.

Enter Walter, Victor’s brother, a highly successful and well-paid surgeon. The two siblings haven’t spoken to each other for 16 years because they have both taken different paths in life following a typically American tragedy: their father lost everything in the Great Depression of the 1930s. In response to this humiliation, his sons have taken opposite paths. Victor gave up his studies, joined the NYPD and stayed at home to help his father; Walter qualified as a doctor, became rich and sent home a pittance every month. That was then; this is now: when Walter arrives, he not only questions the economic sense of Victor’s deal with Solomon, but also turns up the psychological tension — he wants to settle some old scores. The result is a riveting piece of theatre.

Although this is an old-fashioned well-made play, Miller crafts it with immense skill, combining psychological realism with a state-of-the-nation analysis that shows how the American Dream can be destroyed by economic failure, as well as by personal failings. Written at the end of the 1960s, with the clash of the Vietnam war and hippie counterculture ringing in his blood, Miller’s understanding of character is, in dramatic terms, completely convincing, balancing as it does personal idiosyncrasy with symbolic resonance. Victor comes across as deeply sympathetic, full of a basic integrity, but a disappointment to Esther; Walter is more energetic, more successful, yet more unattractive in his selfishness. One represents working-class grafters; the other middle-class high achievers. Yet both brothers have paid a huge price for their life choices.

So while Solomon haggles to get the lowest price for what looks like junk furniture, even if some of the pieces have great sentimental value in terms of family history, the two brothers have to reconcile their differences by understanding what each has lost in the choices that they have made. Whether they can love each other again is a question that burns through the second half of the play, when the illusions that helped sustain the lives of both Victor and Walter are gradually torn away. Miller’s play has the dimensions of a modern tragedy, and his writing is full of even-handed sympathy for all his characters, as well as a righteous anger, in the best sense of the words, against rampant capitalism, an economic and social system that distorts and dehumanizes while exulting the great god Mammon. To say that this message remains relevant is surely unnecessary.

What is so impressive about the play is the majestic architecture of Miller’s writing, with the initially slow and then comic first part followed by the increasingly deep exploration of fraternal conflict of the second. There’s a perfect balance between the huge weight of history — Miller was a teenager during the Depression and his personal memories surface in some of the speeches — and the feelings of the characters in the here and now. But although the choices that have defined the lives of the two brothers are the emotional core of the play, the figure of Solomon is so imposing in the drama’s first half that it casts a long shadow across the entire evening. Not only does Solomon evade Victor’s repeated attempts to name a price, he does so by spinning stories about his own life and moralising about the human condition. By tapping into the heritage of Jewish New York humour, Miller serves up a thrilling combination of the serious and the absurd.

This 50th anniversary production is directed with loving care by Jonathan Church, who gives a clear reading of the big themes of security versus ambition, love versus money, and human value versus the power of success. On Simon Higlett’s set, which has a huge pile of furniture precariously tilting over the stage, Suchet revisits Millersville after his award-winning performance in All My Sons in 2010, and again proves that he is a total star. Whether comic or prophetic, whether cunning or afraid, whether crabbed or light on his toes, his portrait of Solomon is memorable in all of its detail and density. There is something awesome in perfection and Suchet’s performance not only dominates the stage, but very nearly defines the whole play. Although he has less stage time in the second half, Suchet creates such a strong impression of a fully lived existence that his Solomon remains in the mind long after the show ends.

Compared to this feeling of haunting, with its epic sense of one man representing decades of hustling and a global will to survive, the other actors have less impact. That said, Coyle has a quiet heavy intensity which often lights up with flashes of passion, and the rapport between him and Suchet is outstanding, so much so that on the press night there were several moments of barely controlled corpsing in the first part of the drama. Likewise, Adrian Lukis and Sara Stewart are similarly excellent, the one beaming with success, the other always watchful as she follows the shifting fortunes of the two brothers. The whole cast makes Miller’s vision utterly compelling: the costs of belief in the American Dream have rarely been so acutely presented.