All My Sons, Old Vic 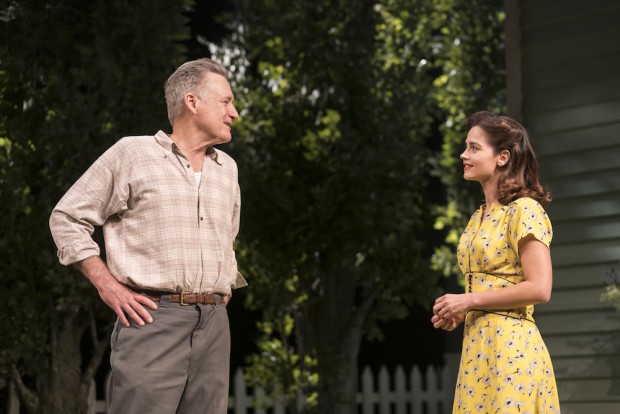 Superstar Sally Field has come to town. With two academy awards and countless other accolades, the actor who played Forrest Gump’s mother and dozens of other roles, from Frog to Mrs Lincoln, in Hollywood blockbusters and on television now returns to the stage to play a delusional and deceitful matriarch in Arthur Miller’s All My Sons, part of the Old Vic’s continuing tribute to the American playwright. She is joined on stage by Bill Pullman (Torchwood) and Jenna Coleman (Victoria) in a co-production with Headlong theatre company, directed by Jeremy Herrin.

First staged in 1947, All My Sons is about Joe Keller (Pullman), a self-made mid-West businessman, who lives with his wife Kate (Field). The couple have two sons, Larry — who has gone missing while fighting for his country in the second world war — and Chris, who has survived the conflict and now wishes to marry Ann (Coleman), his dead brother’s ex-fiancée. The families are closely connected because her father Steve was once Joe’s business partner and is now in prison, convicted of selling poorly produced aircraft parts to the American air force, an act which has cost the lives of 21 pilots. When George, Ann’s brother, pays the Kellers a visit, the secrets of the past explode into view.

As with most of Miller’s early masterpieces, this is a state-of-the-nation play which grapples with the ethics of success and failure in the American psyche. The conflict between self-interest and social responsibility is clearly shown in the character of Joe, the businessman who keeps his production line rolling even when he knows that what he is manufacturing is sub-standard and will cause trouble. In his mind, whatever he does is justified because he is putting his family first. By contrast, his idealistic son Chris is more concerned with putting his country first: after all, we are talking about the need to support the war effort. And about justice. But what happens when doing the right thing would bankrupt your family?

Miller’s sense of the tragedy at the heart of the American Dream means that there is no easy resolution to these ethical questions. In fact, he deliberately shows that there is no way out. Instead, the shrapnel wounds that are suffered by everyone who comes into contact with the Kellers are clearly portrayed. So Kate and Ann are equally hurt by the catastrophic error of judgement at the heart of the story, with the clear implication that capitalism runs on blood money, and that the profits of money-making from the war machine are all somehow tainted. The just war is stained with the guilt of family complicity in criminal acts.

Despite its star casting, Herrin’s production is disappointingly uneven. None of the minor roles are convincing, and they never gel with the main action. As Joe, Pullman leads with an inexplicably throaty drawl that manages to conceal, if not actually mangle, most of his lines. Some of them are inaudible. Only occasionally is there a glimmer of real pain: for the rest, he is a big hole at the centre of this show. By complete contrast, Field starts off as a lilting tragic Greek oracle, spreading her arms and intoning her delusional fantasies, then gradually, very gradually, she turns into an old lady, visibly shrinking in front of our eyes. It is a carefully wrought star performance. And the main reason for seeing this show.

So much for the parents. As for the younger generation, Coleman certainly radiates the apple-pie freshness of the girl next door, and makes a rather restrained journey from bashful love to determined loyalty. Despite a couple of fierce moments, she is eclipsed by Colin Morgan (Chris), who delivers some good gestures of spontaneity and passages of genuine anger. Likewise, a powerful Oliver Johnstone (George) injects some much-needed passion into the proceedings. He rides the turmoil of his emotions. With a rather standard weatherboard house, and a tiny symbolic tree that looks no bigger than a house plant, from designer Max Jones, this production features a great performance from Field, and has a satisfyingly bleak ending, but its incoherent quality suggests that Herrin has lost his touch.