Home » Reviews » The Kid Stays in the Picture, Royal Court

The Kid Stays in the Picture, Royal Court 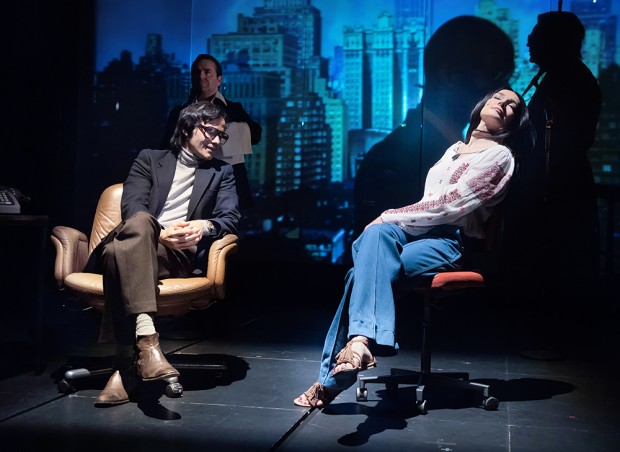 The beauty of fiction is that its stories have both compelling shape and deep meaning — they are dramas in which things feel right and true and real. The trouble with real life is that it’s the opposite: it is messy, frequently shapeless and often meaningless. So, at the Royal Court, Simon McBurney’s adaptation (with help from co-director James Yeatman) of the autobiography of 1970s Hollywood mogul Robert Evans is a hazardous venture. Evans was once one of the hottest producers in Tinseltown, responsible for multi-million-dollar hits such as Rosemary’s Baby, Love Story, The Godfather and Chinatown; then this chisel-jawed all-American hero becomes a zero as he hits the buffers in the 1980s.

McBurney takes this story, which Evans himself chronicled in 1994 in an award-winning book, The Kid Stays in the Picture (a reference to his early job as a very young actor), and turns it into a sprawling epic whose ambition is to tell a personal tale that goes hand-in-hand with the story of a nation. Of the American Dream. At the same time, his desire is to give it a technically sophisticated staging with live camera work, shadow play and clips from classic films. It’s all vaguely reminiscent of Katie Mitchell’s innovative work from a decade ago. But nowhere near as good. Sadly, despite a postponement of the play’s opening for a week, McBurney has not had enough time to make any of this work. The result is not only a bad play, but a sad evening in the theatre.

Evans’s story is not without its interest. Born Robert J Shapera, he was the son of a Jewish dentist, and began his career by working with his brother, selling women’s fashion. Spotted by veteran actor Norma Shearer, he played her husband Irving Thalberg in the bio-pic Man with a Thousand Faces. Unable to shine as a star, Evans became a producer, and his mercilessly hard graft helped save Paramount Pictures from bankruptcy. Then his workaholic lifestyle took a nosedive as he became a coke head, was accused of drug possession, got involved as a potential witness in a murder case, and fell out with his wife, Ali MacGraw (star of Love Story). Phew. And if that’s hard to follow, just try watching the play.

Along the way, Evans meets Henry Kissinger, gets hilarious mumbling phone calls from Marlon Brando, falls out with various other Hollywood big cheeses, and name checks more than a dozen famous names, from Ava Gardner to Roman Polanski to Jack Nicholson. Ironically, for a play that twice features his dictum that “the story is the star”, all this is told in a mess and meander of flashbacks, endless narration and unclear scenes that either crawl at the most pedestrian pace, or buzz with unclear detail. Added to this is the staging, which simply doesn’t work: the stage picture is confused, the theatricality is juvenile (every air trip is illustrated by an actor carrying a toy plane) and the storytelling lacks clarity and point. So although this show boasts a raft of big-shot producers, including Barbara Broccoli (who along with her brother has produced eight Bond films) and Complicite theatre company, and seems to have a Broadway transfer in its sights, this smells like a flop to me.

The company — led by Christian Camargo as Evans and Heather Burns as MacGraw — share the pages and pages of narrative, and play the dozens of characters. They pose for moments from famous films, and occasionally even act a little bit. But just a little bit. The result is technically complex, but not very attractive. And while we can all appreciate that a producer’s life is all about making phone calls, must a play about it be crammed with them? Ring, ring, ring. It’s enough to drive you mad. Basically, this play is a mess. And a long mess at that. It is clichéd in its choice of music (Gershwin and New York!), banal as a Californian self-help manual in its choice of quotes from Evans’s wisdom, and muddled in its vision. Even Anna Fleischle’s design is banal. On the night I saw it, there was a technical breakdown in Act One, a perfect judgement on the hubristic nature of this ill-conceived enterprise. How I wish the Royal Court had stuck to fiction. After all, it is supposed to be a playwright’s theatre.