One for Sorrow, Royal Court 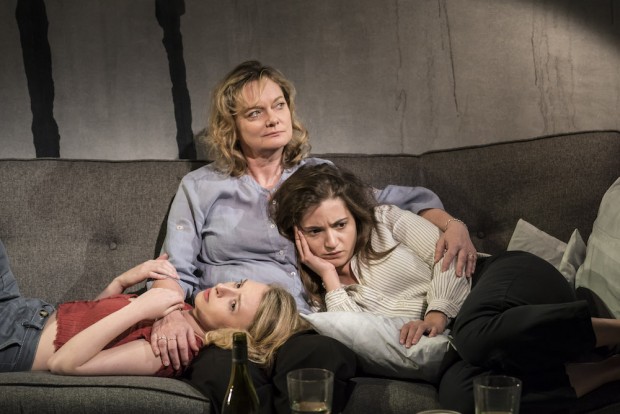 It’s the stuff of nightmares. There’s a massive explosion, the sound of smashing glass, falling debris and police sirens. Gunshots. Panic in the streets. It could be the November 2015 Paris terror attacks, in which the Bataclan venue was the scene of a massacre, except this time it’s happening in London. Yes, the stuff of nightmares. And it is also the powerful start of Cordelia Lynn’s new play, One for Sorrow, which has just opened at the Royal Court’s upstairs studio space. And it all begins in anxiety-rich pitch-black darkness.

As the noise of the explosions recedes, we become conscious of the thoughts of one of the attack’s survivors, a young man whose fear is “cooking his sweat” and whose backpack, a deliberately sinister touch, is weighing him down. But, luckily for him, he’s made it to a residential area, a safe place, a sanctuary — and he’s about to knock at the door of an inviting house. But who exactly is he? Inside this house, before he arrives, lives what the playtext calls “a white family”. It also a perfectly middle-class family, with middle-class jobs and a middle-class home and middle-class manners. Fiftysomethings Emma and Bill are a happily married professional couple with two daughters, Imogen, early twenties, and Chloe, who’s doing her A Levels.

This nice middle-class liberal family watch the unfolding terror attacks on television, and, as the death toll rises, the idealistic Imogen wants to do something practical to help. She goes on twitter and shares the hashtag Open Door, which means that she wants to offer help, and a place to stay, to anyone who has been caught up in the violence. Very soon, a young man, who calls himself John, takes up the invitation. He has witnessed the attacks and needs a safe place to rest. After some heated family discussion, in which the idealistic Imogen and the feisty, over-excited, Chloe clash with their more pragmatic and cautious parents, they all welcome John, a complete stranger, into their home.

John, however, is not what they expected. He looks foreign, wears a parka which he won’t remove, and carries a heavy backpack. He looks like the media image of a terror suspect. In an excruciatingly embarrassing conversation, in which the middle-class English social awkwardness is brilliantly captured, it turns out that he is a British Asian, doing a PhD in mechanical engineering, specializing in robots. And he has a craving for apples. He must be in shock. After their initial embarrassment, Imogen and Chloe start to warm to John, but, as they chat, something feels wrong. The dreadful suspicion arises that he might not be all that he seems.

Lynn’s play intelligently explores the culture of fear in an age of terrorism by showing how an outsider not only intensifies the conflicts inside a family, but also makes each of the youngsters, and especially Imogen, question their own worldview. Because of their privilege, the family thinks of themselves as good people, but that doesn’t mean that their prejudices are very far from the surface. What starts off as a comedy of middle-class manners soon develops into something much more troubling. Fear strips away the veneer of civilized behaviour, and as this family realizes that they have relatives — Emma’s sister and her niece — caught up in the attacks, the emotional temperature rises.

Although much of the play is naturalistic, Lynn writes with a distinct touch of absurdism and there is a smart flavour of satire in many of the exchanges. She imagines the dynamics of sisters and parents with striking perception and her picture of Bill, the rather hysterical male in a home full of females, is wryly amusing. As a satire on middle-class life, the play is frequently laugh-out-loud funny, and the dark shades of violence and the impact of fear and terror on our psyches is recognizably real. Personally, I would have preferred less naturalism (a style which always raises questions: why doesn’t John phone home? Is the subplot about their relatives really necessary?) and I felt that the ending was too drawn out. Somehow the situation, like John, outstays its welcome.

Lynn, who got the Court’s 2017 Harold Pinter commission, has a strong imagination and, as she proved with Lela & Co, she bravely refuses to write straight realistic drama. This time she is clearly alive to emotional and intellectual enthusiasms and stresses of the two youngsters, with the little sister Chloe behaving like a typical teen (excited, curious, confident and spontaneous) while the older Imogen, studying Social Anthropology, is more self-possessed, awkward in her incipient moral probity and inexperienced in dealing with the mess of life. Yet Imogen’s desire to do the right thing is the moral heart of the play, just as John’s presence is its catalyst. But if, as the play implies, humans are capable of anything, even nice liberals have a breaking point. And, even worse, in John’s words, “I think we can get used to anything.”

James Macdonald’s detailed production makes the most of Lynn’s vivid imagery, with its bloodied phones and other pictures of damage, while Laura Hopkins’s design includes a half-eaten meal — a symbol of how terror interrupts everyday life — and she also evokes the way that dread can seep into a family home like damp. Sarah Woodward’s bossy, occasionally bewildered, Emma is completely convincing, as are the rest of the cast: Neil Dudgeon’s blustering, sometimes ruminative, Bill; Pearl Chanda’s Imogen, a highly strung young woman confused by the conflict between her feminist ideas and her real emotions; and, making her debut, Kitty Archer as the brattish Chloe, whose wildly inappropriate school art project holds centre stage. Irfan Shamji imparts John with deep humanity and a sense of vulnerability. But the play, and I say this with some sorrow, raises expectations it doesn’t quite deliver on.