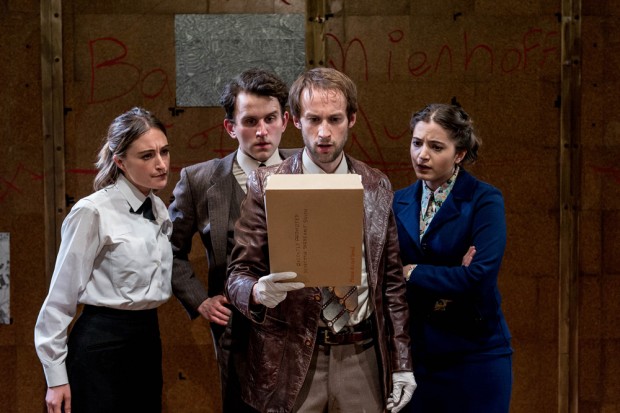 Today, terrorism means killing as many innocent people as possible. Fear is created by completely random attacks, so that no one feels safe. But there was a time, in the past, when political anarchists would focus their attacks on selected targets and avoid civilian casualties. For a year, begining in August 1970, the Angry Brigade brought armed struggle to Britain, setting off some 25 bombs, mainly aimed at the property of the rich and powerful (although one person was slightly injured). But they were a serious embarrassment to reactionary Tory prime minister Edward Heath and the whole Establishment.

At the end of the 1960s, British society was riven by conflict. Waves of industrial strikes were countered by a Tory government determined to pass laws which penalised the trade unions. Class war was in the air. In this heady atmosphere, many young people were radicalised, moving from student activism to outright revolt. A small handful of them formed the Angry Brigade and embarked on a mission to fight back against the Tories — by any means necessary. Their actions included using small home-made bombs against targets such as banks, boutiques, embassies, the Miss World contest, judges and several top Tory MPs. These were announced by communiqués, written in the language of the left counterculture and of the French situationists, and were, needless to say, incomprehensible to the police.

Part One of James Graham’s outstanding documentary about the Angry Brigade is called The Branch and opens in a basement in Scotland Yard where traditional-minded detectives are puzzled by these mysterious actions. Young detective Robert Smith struggles to get his head around a world of other young people he doesn’t remotely understand, so the piece begins by exploring and explaining a world we have lost: a place of radical hippies, enraged students, alternative bookshops and rock music. It puts the Angries into their social and political context, and shows how the whole of late 1960s progressive culture was bewildering to “straight” society.

Led by Smith, a team is formed — DC Morris, WPC Henderson and WPC Parker — and they investigate the hippie underground. The beguiling thing about Graham’s inventive account is that he imagines that these staid young police officers are changed — their minds blown — by the ideas they encounter in their research. James Grieve’s imaginative production, with its fab soundtrack, jazzy projections and air of anarchy, offers an attractive and informative piece of info-drama. In particular, Smith’s crucial insight — that you can catch perpetrators by following the web of their social interactions — is put centre stage, using red ribbons and red thread.

Then, in Part Two, called The Brigade, we are welcomed inside the home of these activists: 359 Amhurst Road. We watch how they take down doors and knock down walls, liberating the architecture as well as their minds. Most radical of all they have a toilet with no door, thus abolishing the concept of privacy. Using songs from musicals, from television adverts, and from rock music (a great riff from Hawkwind), this section explores the relationships between John, Jim, Anna and Hilary, and shows how their backgrounds (whether privileged or working class) were a factor in their radicalisation. This part is full of lefty ideas, of revolutionary rhetoric and of psychological insight.

Grieve’s production, for Paines Plough and Theatre Royal Plymouth, throbs with exciting theatrical effects, and Graham’s text is politically insightful — he has clearly drunk from the deep well of 1968er ideas so the piece is brilliantly imaginative as well as informative. It is a documentary with no trace of dusty research; like a vinyl rock record, it has the power to transport you to another place. As well as a good design by Lucy Osborne, the appealing performances from a super cast of four — Mark Arends (Smith/John), Pearl Chanda (Henderson/Anna), Harry Melling (Morris/Jim) and Lizzy Watts (Parker/Hilary), who also play other roles — mean that The Angry Brigade is a thrilling and highly enjoyable evening. It brims with youthful idealism and political commitment, and is full of questions about how to live life and fight the power. Right on!

This review first appeared on The Arts Desk, 8 May 2015