Home » Reviews » That Is Not Who I Am, Royal Court

That Is Not Who I Am, Royal Court 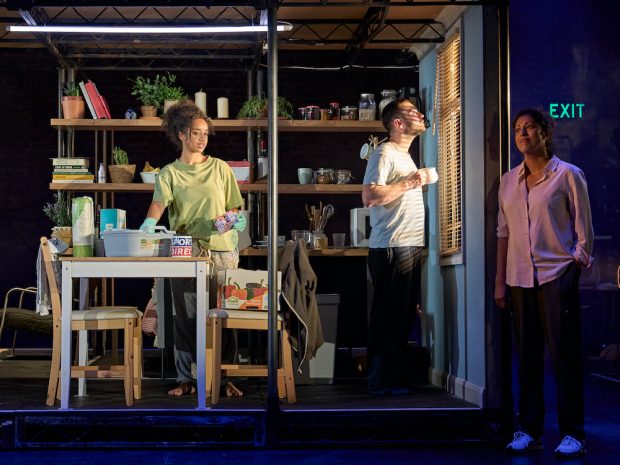 What is the shelf life of a theatre gimmick? In April, the Royal Court announced that they were going to stage a debut play by an unknown writer, Dave Davidson, who has worked for decades in the security industry. His drama was hyped up, helped by Time Out magazine, and by fellow playwrights Simon Stephens and Dennis Kelly. Hooray! — this new writing venue had discovered an unknown talent. Not. In fact, if you buy a ticket you will not see That Is Not Who I Am by Davidson (who doesn’t exist), but instead you will experience Rapture by Lucy Kirkwood, who is an established playwright. It’s a kind of postmodern, post-truth gimmick. But does it work?

The problem with publicity stunts like this is that, unless the play is a work of genius, the gimmick rapidly becomes tedious and irritating. It spoils the show. In fact, it only draws attention to all the faults of the writing. Anyway, the evening begins with a spoof public announcement which claims that the Royal Court apologizes for staging Rapture under false pretenses, but has been forced to do so because the Home Secretary has threatened to censor the explosive content of the show: yeah, yeah, pull the other one. And get on with it. Furthermore, the claim that the Royal Court is a heroic unpholder of the right to free speech and is breaking the law by staging Kirkwood’s play is ludicrous and not even smile-worthy.

Once things get properly underway, Lucy Kirkwood, who is played by actor Priyanga Burford, narrates the chilling story of Noah and Celeste, two young people who meet on a blind date organized by a national newspaper, and then live together. Kirkwood shows, quite perceptively, how the psychological needs of two individuals can suddenly click: Noah comes across as weird, but Celeste fancies him; they soon complement each other. They explore the corners of the digital world. But while she works as a nurse, during the stressful COVID pandemic, he is a former soldier who becomes drawn to broadcasting his radical opinions through a home-made film and on his YouTube channel.

As the Kirkwood character explains, the everyday lives of the couple are recorded by surveillance devices such as their mobile phones, Netflix subscription and by a neighbour, so the play claims to be a factual record of their conversations. A couple of sex scenes, and their difficulty in conceiving a child, suggest an invasion of their privacy, and when the couple decide to organize a political demonstration it is clear that their paranoia about state violence and censorship is well founded. Well, according to Kirkwood, anyway. But, as the title of the play suggests, one alternative to political action is religious enthusiasm — millenarians believe that during the Second Coming the holy ones get an instant rocket to heaven.

The satirical content of the play is contemporary, if a bit mild. Conspiracy theories are talked about, the digital world is discussed and the stresses of lockdown acknowledged. A couple of neat ideas pop up: the algorithm, which processes info about Noah and Celeste “in a millionth of a second” led them to fall in love, and the slogan about data being the new oil, and the way we believe our own untruths. With additional material about other contemporary references — from climate change to Mumsnet to period poverty — Rapture takes 110 minutes to paint a recognizable picture of England today. The result is a mildly amusing comedy of manners trapped in a desperate attempt to be exciting.

Unfortunately, this thriller is never very thrilling, the satire is never very sharp and the humour is lukewarm. Kirkwood’s Noah and Celeste have a more or less convincing couple dynamic, but the overall story is preposterous: they have really done nothing that would justify their termination by the state (Kirkwood gives away their fate right at the start). The characters are fairly close to gender stereotypes (he is nerdish but determined; she is wobbly and then hysterical) and their desire to change the world is treated cynically as one big joke. Only the final moments, when the meta-theatrical frame is smashed, meta-theatrically of course, gives us a jolt of joy.

Lucy Morrison directs this overlong and overblown show with a cool pace on designer Naomi Dawson’s revolving set, which is openly serviced by stage crew and lit up by Gino Ricardo Green’s occasional projections. Priyanga Burford’s narration is quietly humane and clear, while Siena Kelly (Celeste) and Jake Davies (Noah) have a notable chemistry and engaging stage presence. But they are in a play that is intricate without being illuminating, and the gimmicks around the show — which include a fake playtext cover — only emphasise its poverty, and its cynical sensibility in which everything, from climate change to political paranoia, is just a joke. Trivial. At a time when many feel a real anger at the current government, this playful silliness is like a middle-class slap in the face to anyone who really wants to change the world. Still, I’m sure that the Netflix version will be a big hit.