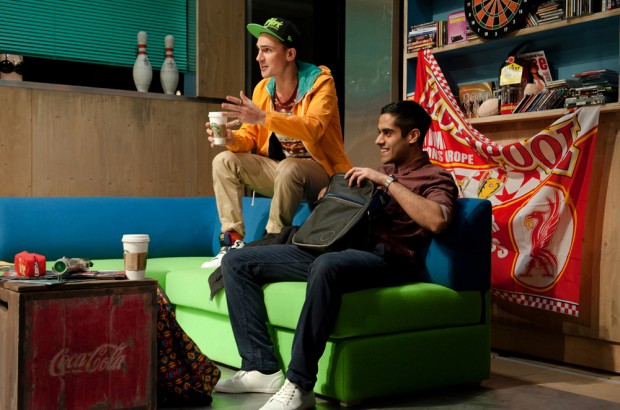 London theatre loves plays about the media. Is this because we spend so much time flicking through magazines, visiting websites or watching television? Or is it because this venue’s trendy metropolitan audience is as cynical and world-weary as a media ad buyer? Either way, Lucy Kirkwood’s lively new play is both a hilarious account of lads’ and girls’ mags, and an indictment of their effect on all who come too close to them. But is her argument so obvious that anyone could agree with it?

First, the title: NSFW stands for Not Safe For Work, which means online material that you might not want to be seen gawping at in the office, school or cafe. Bizarrely enough, it has practically nothing to do with the rest of the play, which is a tale of two halves: two magazines and two editors. In the first half, Aidan (Mighty Boosh’s Julian Barratt) is the editor of Doghouse, a lads’ mag struggling to maintain circulation. Anyway, its annual Local Lovelies competition should help sales — it features topless pictures. But when the winner, Carrie, turns out to be underage, Aidan has to deal with her angry father, Mr Bradshaw. He also has his hands full with his staff: posh Rupert and Asian Sam. Something tells me that they won’t be working for Doghouse for much longer. The same is not true for Charlotte, an Oxford graduate who is both a feminist and an enthusiastic member of this tits-tarts-and-tarmac publication. Charlotte fits in perfectly, and eventually commits an act of cruelty that completely subverts our expectation that she could be a nicer person than the boys she works with.

In the second half, the messy, blokey stage transforms into a cool, blue office where Miranda (Janie Dee) is the editor of Electra, a classy girls’ mag that features celebrity photographs which have any physical imperfection circled in red and laughed at. Miranda takes on one of Doghouse’s former employees and is interviewing another. She rejoices in her power, her cleverness and her coolness. There is iron in her sweeping gaze. Her tongue is barbed. Contempt makes her lipstick shine.

But the best scene of the evening is the sharply observed middle one when Aidan is confronted by Mr Bradshaw and accused of exploiting his young daughter. Here, the main themes of the play are developed. One clash is that between idealised notions of love and a cynical view of the market, and of the appetites of the mass of readers, especially low-class ones. Another is the tension between privacy and exposure. Each of these conflicts is deftly if unsurprisingly handled.

Kirkwood’s writing is intelligent, insightful and rings with one-liners and zippy exchanges. But, at 90 minutes, it feels as if the play not only pushes at the open door of our shared liberal prejudices, but also has not really explored the full richness of the situations it has imagined. Politically, its picture of post-feminist men and women has the inadvertent effect of making malice seem attractive and its ending suggests that corruption triumphs over idealism. Both Aidan and Miranda simply glory in cynicism.

Okay, the satire is to some extent agreeable, and Kirkwood’s picture of office life, where public-school types drift through work while others suffer the contemporary slavery of unpaid placements, is instantly recognisable. But I did long for more surprise, more shock, more — well just more. For me, it simply wasn’t enough to know that the young spend their waking hours in magazine offices that are not, to echo the play’s title, safe for work. And this frustration prompts the thought: why are plays at the Royal Court nowadays so unchallenging?

Smartly directed by Simon Godwin, on Tom Pye’s striking set, NSFW boasts a couple of thrillingly convincing performances by Barratt and Dee as the big beasts of the media jungle. As parodies, these manipulative monsters are magnetic on stage. By contrast, the symbols of more humane values — Mr Bradshaw (Kevin Doyle) and especially Sam (Sacha Dhawan) — get crushed in the rush towards the brashness that obliterates true feeling. There’s something a bit depressing about seeing the media machine so effectively running over mere human beings.