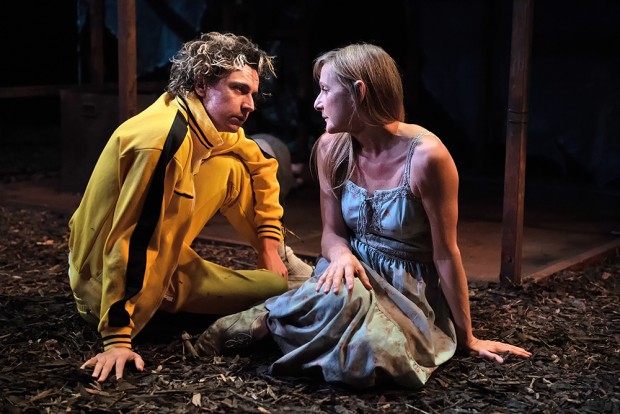 Blackout. Dark, the colour of childhood fear. Black, the colour of despair. Black. No light visible; no colours to see. Just pitch black, maybe even bible black. This is how Robert Alan Evans’s The Woods, which stars the brilliant Lesley Sharp and which opened tonight in the Royal Court’s theatre upstairs, begins — in total darkness. Followed by images of desolation, the sound of torrential rain, the devastation of a falling tree. In the crepuscular gloom, the story begins to unfold. Little light visible; few colours to see. But the weird atmosphere is just about to get weirder. Luckily, Sharp will guide us through.

As the light, like dawn, advances, a bleak wood somewhere in the wilds of America is revealed. In it, a lonely Woman (Sharp) struggles to survive in a shack. Yes, a wooden shack. Winds blow, rains pour down and winter grips the land. Amid the leafless trees, she comes across a Boy, a young man who’s trapped in the snow, and she brings him in, and mothers him. Soon a lone Wolf circles her shack. But who is he? Not an animal, but a man, and a man who torments her. Perhaps he’s her son. Perhaps he’s her conscience. And who is she anyway, and what is she doing, wearing a flimsy dirty dress, and hanging out in a dirty old shack?

We are so habituated to naturalistic drama, where what you see is what you get, that it takes a little while to get your bearings in a play that is not an objective, but a subjective account of reality. Despite all the clues — no snow, the Woman’s clothes, threatening trees — minutes pass before we realise that this is no ordinary story. Instead, it’s a metaphor-rich reading of a psychological situation, an ambient account of mental collapse, with an early clue showing us the cause of distress: a brightly lit kitchen appears on one side of the stage, all pristine white and high tech, and there on the shiny surface is a baby monitor, whose bright red light pulses and from which come the sounds of a baby in distress.

It’s never comfortable to be inside the head of a distressed individual but Sharp, in what is surely one of the most extraordinarily intense performances on the London stage at the moment, takes us by the hand, comforting us even while she also upsets us. As we journey from Survivalist America to some more familiar corner of England, she shows us how to care, with what can only be described as tough love, for a foundling child while standing up, more or less, to an enraged son, a wolf in wolf’s clothing. When the story veers into sheer terror, we hope that she will make it. We root for her. In this symbolic fable, which like a child’s story nods to Little Red Riding Hood and like a Greek tragedy to Medea, a powerful image of unwilling motherhood imprints itself on our minds.

If the main theme of the drama is the idea that Woman is, in the words quoted on the back of the play text “no good with kids”, then this is a very strong account of a subject that is still taboo: some women are just not natural mothers. It is also a deeply empathetic account of an extreme feeling: postpartum depression of a devastating kind. Not just mild baby blues. The Royal Court has bravely given space for a male author to tackle this difficult material, and I think that this is right. After all, if only women are allowed to write about female distress and only men are allowed to write about male distress, wouldn’t theatre be poorer? Likewise, isn’t it odd that many of our best black and Asian playwrights still seem to be confined to the ghetto of writing solely about black and Asian issues?

Anyway, back to The Woods. As if in some Beckettian no-place, we find ourselves watching the Mother gathering wood, building a fire, tending her Boy. At one point, the stage blazes with yellow heat. The Wolf comes and goes, his clothing changing, and as the story metamorphosizes from the wild land to the more familiar terrain of car park, playground and service station, other threats appear. Local lads abuse and bully the Woman, a service worker voices his resentment against society and a mental-hospital doctor tries to assess her condition. In this world of fractured memory and psychological pain, there are few safe places. And, when you find them, they are only temporary. All this is beautifully and hauntingly brought out in Lucy Morrison’s astonishingly powerful production, designed by Naomi Dawson.

On the night that I saw this 90-minute show, a fire alarm went off about a third of the way through and we had to evacuate the building. Despite this distraction, the actors resumed half an hour later, almost seamlessly, a testament to their skill, courage and commitment. Sharp, of course, is utterly convincing in one of the most taxing and difficult roles you can image, being onstage for the whole of the show and showing her character’s pains, delusions and fantasies with immensely deep humanity. It’s also a masterclass in showing how you can visibly age in front of a live audience. Yes, she is that good. And well supported by Tom Mothersdale as the sinister Wolf, Charles Furness as an aggressive bully and Finn Bennett, making his stage debut, as the Boy. This is a blazingly acted and triumphantly imagined piece of new writing.