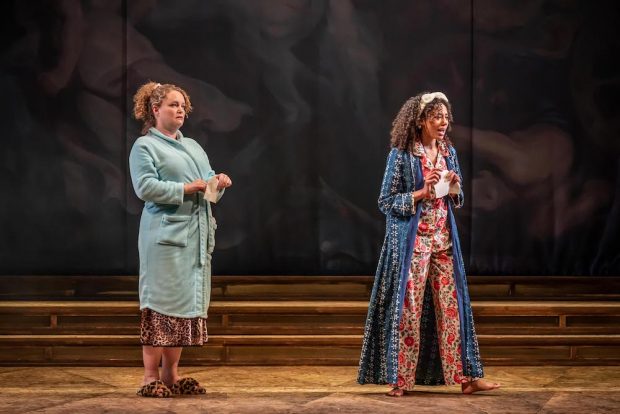 In 1987, Caryl Churchill — without doubt the best living playwright in Britain — premiered her Serious Money, a satire on financial capitalism written in the form of a scintillating Restoration comedy. Tonight, Mike Bartlett — who now has three plays running simultaneously in London (the others are Cock and The 47th) — opens his Scandaltown, a play which likewise uses the linguistic forms of 17th- and 18-century theatre to send up contemporary society. But unlike his 2014 hit, King Charles III, a “future history play” which was written in Shakespearean iambic pentameter, the penmanship here is less glittering and more banal.

The satirical plot mimics the Restoration comedy contrast between a virtuous countryside and a vice-ridden city. The aptly named Phoebe Virtue travels from her home in the north to scandalous London in search of her brother Jack, who she fears has departed from the straight and narrow (she’s right — he has!). Meanwhile, Lady Susan Climber, on advice from Hannah Tweetwell, a social media influencer, tries to hook up with Matt Eton, a Tory minister, in order to advance her career. By the end of the first half, these characters — and a few more — end up at a Netflix masked ball, where mistaken identities create interestingly queer sexual couplings.

The other characters suggest a panorama of British society today. As well as Rosalind Double-Budget (pronounced as if it is French), a television executive, and her virginal son Tom, a wannabe Ken Loach, there is the self-explanatory Peter Media, Sir Dennis Hedge, a billionaire financier, Rebecca de Souza, a Daily Mail columnist, and Freddie Peripheral, whose mystery job (a running joke) is revealed at the end of the play. To heighten the cartoonish quality of the show there is also a randy north country aunt and an ancient retainer. The vividness of the entertainment is heightened by the splendid OTT costumes and lush set, designed by Kinnetia Isidore and the Good Teeth team.

The conflicts are generational, as the current Gen Z complains that both boomers and millennials are revoltingly greedy, and have lifestyles that are wrecking the planet, while those born before the 1990s see the youngsters as virtue-signalling victimized vegans more interested in Twitter than in real social change. In this world, the privileged are Tory politicians and media folk who are too selfish and opportunistic to care about climate change or predatory capitalism. Other targets of the satire include hedonism, cynicism and everything else that is politically correct about behaviour in current social conditions. There are jokes about The Apprentice, Strictly, procurement during the pandemic and Tory corruption (inevitably Partygate gets a mention). Sexuality is represented as fluid; racial tensions are ignored. This could all be such good fun.

Except that it really isn’t. The pantomime quality of Rachel O’Riordan’s bright but superficial production mirrors Bartlett’s writing, which vigorously mixes 18th-century cadences with contemporary vulgarity, but never really delivers any knockout blows. The most dangerous moment is when Jack addresses the audience directly and attacks our collective complacency — but this is simply defused later on when he repents. So no need to worry, Bartlett argues, it’s all just one big joke. This is sadly predictable and timid. If satire is meant to cause discomfort, and have sharp teeth, this play is a soggy gummy grin.

In the second half of what feels like a much too long evening, Bartlett extends his benevolence by showing how most of the characters are really quite nice people after all, and he really takes his time in doing it. The potentially explosive discussions about wokeness and offensiveness are defused, and a long sequence when Lady Climber threatens to show the audience a truly unacceptable dress turns out to be (spoiler alert, but not really) just a tease. In fact, the whole play, which is sold as an insightful critique of current society, turns out to be one long tease.

The problem with satirizing the culture wars is that most of your audience will be on one side or the other, and the only way of not alienating half of them is to be balanced and fair. To laugh at the woke as well as the weary; the snowflakes as well as the boomers. But this results, in Bartlett’s case, in a kind of banal populism which in seeking to please everyone actually satisfies no one. So despite all the contemporary swipes at amazon and dating apps, moral censoriousness and ecological hypocrisy, this piece tells us less about our ethical compromises and more about the need for feelgood theatre after COVID. When the major virtues turn out to be freedom with toleration there’s more wish-fulfillment than anger here.

This mash-up of cut-price Henry Fielding, Oscar Wilde and Joe Orton, both farcical and fitfully funny, has some good performances, mainly from Rachael Stirling, whose curling lip and comic hauteur give Lady Climber’s lines a lively humour. Cecilia Appiah and Matthew Broome, making his professional debut, as Phoebe and Jack deliver a sense of the brightness and changeability of youth, while Emma Cunniffe expertly plays two roles (Phoebe’s aunt and De Souza). There’s also some fun to be had from watching Richard Goulding’s Eton and Annette McLaughlin’s Double-Budget. But in the end Scandaltown is a disappointingly toothless and rather dreary non-satire.