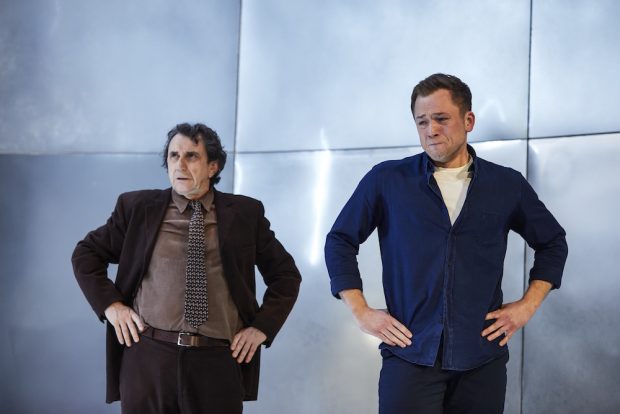 Mike Bartlett’s Cock invites suggestive comments, but the main thing about the play is that it has proved to be a magnet for star casting. Its original production at the Royal Court in 2009 starred Ben Whishaw, Andrew Scott and Katherine Parkinson. Now, this West End revival is performed by Jonathan Bailey, Taron Egerton, Phil Daniels and Jade Anouka. Reports that Rocketman star Egerton fainted during the first preview have raised public interest in a play whose explicit title, with or without an asterisk, seems particularly provocative in a commercial theatre setting. So what’s it all about?

John, the only character to have a name in this bruising and rather brutal play, lives with a man, M, who works as a broker. Their relationship is spiky, but has survived the differences in their temperament — until John meets W, a divorced classroom assistant, and has sex with her. While both M and W seem to be confident in their own skins, John is paralysed by indecision. Is he gay or straight, or maybe bi? The various possibilities are outlined and result in a dinner party where John has to do what he is so bad at: make a definite choice. But if he doesn’t know who he really is, how can he?

Bartlett’s play is clever in that it provides enough substance to make us wonder about John’s character, but not enough to exclude every possibility. Is his indecision, which at times is excruciatingly acute, a terrible psychological inheritance, or just a cover for his selfishness? Is he greedily bisexual and a commitment-phobe? Or is he really suffering from a sense of not wanting to upset those who are attracted to him, and those that are closest to him? At one point, he says he feels like he’s two people. M’s father, unsurprisingly called F, is one of the dinner guests, and certainly has his own opinions about the matter. Unsurprisingly, his question — “John, who are you really?” — goes unanswered.

With its sharp dialogue, often familiar enough to any couple, and laugh-aloud jokes, its moments of transgressive honesty and explicit and charming sexuality, this is an entertainment that is lit up by the excellence of its acting. Jonathan (Bridgerton) Bailey’s John expresses his fumbling indecision with a range of facial grimaces, conveying his character’s fears perhaps more successfully than his occasional tenderness. His palpable awkwardness and moments of anguish often result in a rictus which sums up his inability to make a decision. In comparison, Taron Egerton’s M is cooler, his ironic attitude to his lover’s procrastinations and over-thinking often amusingly acute. His attitude is so persuasive that you are tempted to side with him in this sex war.

But then Jade Anouka’s W comes onto the scene, asserting her individuality and easily and entertainingly mocking John’s misconceptions. Her mixture of feisty energy and grounded calm lends variety to what is a testosterone-heavy play. The late arrival of Phil Daniels’s F emphasizes the bruising brutality of masculinity. With this material, director Marianne Elliott and designer Merle Hensel create 105 minutes of excitement, with the actors concentrating on their emotional conflicts in a piece that dispenses with props and banal mime. Instead, there is constant movement, suggestive actions and slow dance moves, punctuated by moments of relaxed stillness, which carry the story and allow plenty of room to consider the play’s themes.

The main trouble is that Bartlett sets up the figure of John the indecisive, a man who promises to love both M and W, while failing them both, and them repeats this pattern for the whole duration of the play. While I was blown away by the situation when I first saw it, this time I’m less convinced by the writing. Not only is it repetitive, but also there is too little exploration of either each character or of the theme of identity. Bartlett is stuck with stating and restating John’s binary choices, with additions of anguish, but no dramatic development. Women get a bad deal here, but likewise the playwright doesn’t say much of interest about either being gay, or about being straight.

What is missing is a queer sensibility that really questions simple binaries about being either gay or straight, and a more in-depth exploration of each character. Apart from introducing a real bruiser, the addition of M’s father distracts from the main drama rather than enhancing it. So although the discussions about our sexuality — is it, as F crudely argues, a genetic condition that cannot change? — are rather basic and perfunctory, it’s the acting that should draw you to this show. Elliott’s production is not only beautifully lit (by Paule Constable), but also benefits from movement director Annie-Lunnette Deakin-Foster’s contribution. When the characters sit down, they just make a twitch of the hips rather than a full mime. Clothes are removed with a simple hand movement. So the sex is talked about, with a couple of gestures that are appealingly vague rather than full-on, and there is a warmth about this style of non-naturalistic theatre that is instantly appealing.

With a set whose stainless steel backdrop occasionally produces mirror images of the action, the stage comes alive with the clashes between the characters in an ugly battle of wills. Bailey is particularly forceful and particularly successful in conveying John’s pain as well as his indecision, and Anouka provides some needed relief with her more humorous views on the situation; at the same time, casting a black woman in this role makes the passage about her being stupid and useless at school a rare moment of danger in the evening. For his part, Egerton clearly shows how M’s confidence is slowly sapped, and how his anger and neediness gradually assert themselves. You can easily forgive the lack of thematic development when Bailey, Egerton and Anouka ignite the emotional fuel of the story — they blaze.