Home » Blog » About The Author 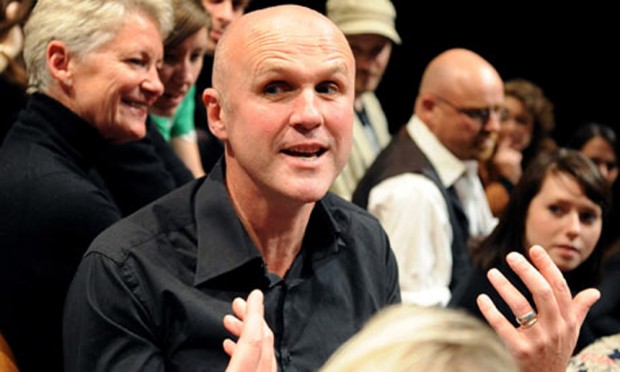 Fresh from seeing Tim Crouch’s new play, The Author, at the Royal Court Theatre Upstairs, I especially liked the mix of audience participation in the here and now with a more satirical strand, which weaves in and out of the play. The direct involvement of the audience is the latest episode in Crouch’s continuing exploration of what it feels like to go to the theatre, of the experience of playgoing. And of the nature of theatrical representation. At the same time, sitting in the middle of the audience, he and his cast tell the story of putting on a particularly savage piece of in-yer-face theatre, all about abuse and atrocity. But because this is all narrated, and not shown on stage, it happens inside the heads of the audience, which is where all the best theatre takes place. I went away full of powerful visual images, even though nothing had been shown to me. I can’t forget the beheadings and the child abuse. Grim as this is, there was also a humorous strand, in which Crouch satirises the typical Royal Court play (from the 1960s to the 2000s). At one point, this is described as “Bombings and bummings! I’ve seen someone shit on a table! I’ve seen a man have his eyes sucked out. I’ve seen so many blindings! And stonings. Um. I’ve seen a dead baby in a bag. A baby stoned to death. I’ve seen a dead baby get eaten!” Despite this emphasis on seeing, on the visual, all that you actually see during Crouch’s show is a handful of actors and some audience members. All the other images come from within.