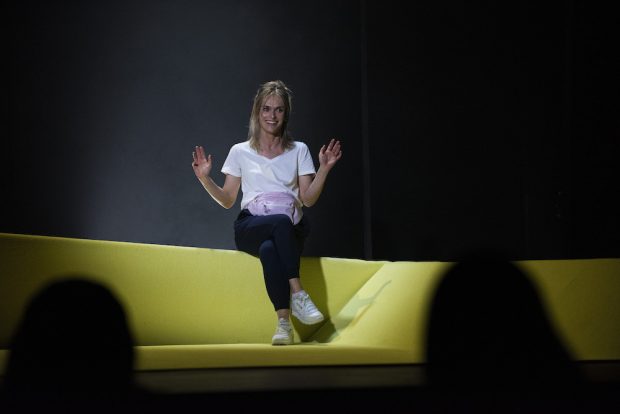 Irish teenager Saoirse Murphy has a dirty mouth. And she’s not afraid to use it when talking to the nuns at her convent school. But it soon emerges that her feistiness is a cover for some very disturbing problems in Sarah Hanly’s energetic debut monologue, Purple Snowflakes and Titty Wanks, which was first performed at the Abbey Theatre in Dublin last year and now visits London’s Royal Court for a short run. And although much of the material is familiar, it is thrillingly performed by the playwright herself.

Although school life is farcically funny, the pressures of an unusual home life and an absent father mean that Saoirse’s experiences of burgeoning same-sex eroticism go hand-in-hand with an eating disorder. This is described in excruciating detail which mixes humour with horror, and stresses the pressures on the female body of her desire to keep control, a need which she shares with Ashling, who suffers from an even more serious condition. At every point in this coming-of-age story, the patriarchy and the Catholic church are accused of heaping intolerable pressure on young women.

When Saoirse is finally expelled from school, after a brilliant subversion of the school play (Sophocles’s Antigone, here given both extra symbolic weight and an incarnation which mixes dollops of fantasy with reality), she escapes to London to become a musical theatre student. Although empowered by this break from home, similar pressures cause the return of her eating disorder and a feeling that self harm at least offers a sensation of self-determination, instead of the chaos of old thoughts and new experiences. For the sake of some sanity in her understanding of her identity she decides to describe herself not as a lesbian, but as a “purple”, an impressive attempt as self-definition.

This is not the first portrayal of the pressures on young women, and there are inevitable echoes of A Girl is a Half-Formed Thing and of Fleabag, but the play also tackles the problem of how, just when we think we can sit back and imagine that gender relationships have improved over the decades, the same old patriarchal platitudes and emotional violence return with a vengeance. With its parodic and critical attitude to the church’s use of the myth of Adam and Eve, as well as the poverty of positive female role models, this show packs a punch along with its laughs.

Hanly’s writing has a great mix of fun and anger, and her storytelling is rapid and revealing. She has a joyful relationship to word play, rhyming anus with Seamus, and colourfully describing the physical effects of psychological distress and drug abuse. As the true cause of Saoirse’s loss and grief is made clear, her blazingly satirical attitudes are shown to be both a true expression of her anger and a way of coping with intolerable feelings. If the title of Hanly’s play is more about marketing than about accurately describing its contents, the boldness of this vibrant production makes up for any misgivings.

Of course, a 65-minute show cannot hope to thoroughly explore the full implications of Hanly’s material, but the production strikes the right balance between entertainment and seriousness. Directed by Alice Fitzgerald and designed by Jacob Lucy, the feminist message come across loudly and proudly, and Hanly’s performance is both sympathetically warm and well focused in its aggression. Mischievously she pulls props, such as a landline telephone or soft-toy testicles, from her pink bum bag, and alternates between intimate chats and joyous dancing, then veering from sex to wild drunkenness. At one point, a birthday cake descends from the ceiling, at another a pantomime bean stalk. There’s fab music, fab lighting. An energetic, even electric, evening.