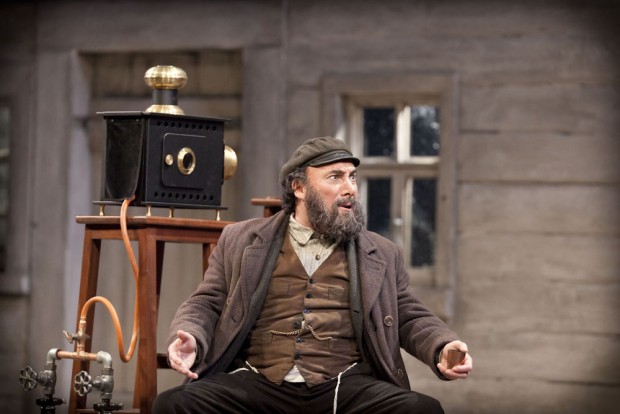 Travelling Light, a new history play by Nicholas Wright, directed by Nicholas Hytner, opened at the National Theatre last week. It is a charming, amiable and evocative play, starring Antony Sher, that looks at the origins of the Hollywood film industry in the shtetls of Eastern Europe. The first half shows how the young Motl Mendl returns to the village of his birth after the death of his father, the local photographer, and discovers a Lumiere Brothers Cinematograph, which he soon uses to film his neighbours. But filming friends and neighbours doesn’t get you very far, and soon Motl and Anna, his muse, discover the joys of fiction. It’s a lovely parable of artistic creativity, but one thing puzzles me. At a crucial point, Motl exclaims, “I’ll make a picture about people who don’t exist. Who never existed.” As if the idea of moving pictures telling a fictional story had never occurred to him. And his peasant neighbours are likewise astounded. But isn’t there a credibility gap here? Didn’t they have theatre in Eastern Europe in those days? Surely everyone knew about fiction. It was just a question of putting a camera in front of the stage.