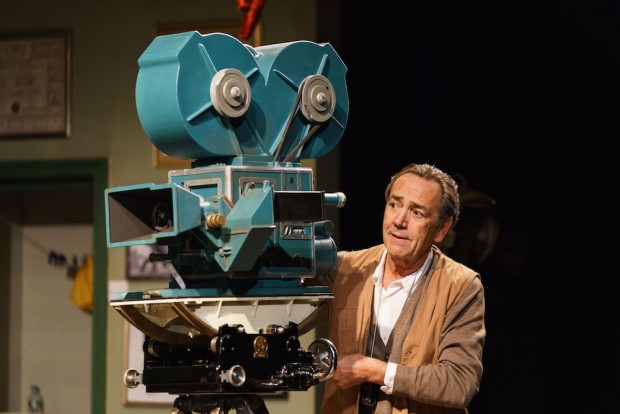 Playwright Terry Johnson is to biographical drama what champagne is to wine. At his very best — in plays such as Insignificance, Hysteria and Dead Funny — his writing sparkles, fizzes and, yes, gives you an instant high. Although silent for about a decade, he is now back with a new play which, although slender compared with some of his previous hits, is full of both humanity and of his love for the golden age of movie-making. Prism is a biog-play about Jack Cardiff, the Oscar-winning cinematographer whose best work includes classics such as Michael Powell and Emeric Pressburger’s The Red Shoes and Black Narcissus, as well as John Huston’s The African Queen. He also worked with Alfred Hitchcock — and on a Rambo movie.

Johnson gives a deeply sympathetic portrait of Cardiff, played with appealing integrity and poignancy by Robert Lindsay, in his declining years, as the man who filmed colours never before seen faces dementia and blindness. Helping him cope with the bewilderment that his condition causes are his wife Nicola (Claire Skinner) and Lucy (Rebecca Night), an agency carer. In some lovely fantasy sequences, they also embody memories of Katharine Hepburn and Marilyn Monroe for the man who “made women beautiful”. At the same time, in his Buckinghamshire home, his son Mason (Barnaby Kay) has converted a garage into a memorabilia-stuffed den, hoping that his father will have sufficient presence of mind to finish writing, or dictating, his memoirs.

The set, designed by Tim Shortall, includes an ancient Technicolour film camera, a relic from the heroic days of innovative film technology, but now, like Cardiff, missing a vital piece of equipment: in this case, a prism to separate out the light. On the walls are luminous photographs of Hollywood movie stars (Marlene Dietrich, Hepburn, Monroe), as well as the cinematographer’s copies of the paintings of great masters, Vermeer, Rembrandt and Van Gogh, all of whom inspired his lifelong quest to capture the effects of light. The play, in fact, is partly an extended song of praise which extols the beauty of light in all its facets, actual, technical and metaphorical.

While Mason wants his father to be immortalized by his memoirs, Nicola — Cardiff’s much younger spouse — is suffering on a daily basis because he doesn’t always know who she is. When, in the dream sequences, he casts her as Katherine Hepburn, she feels the lonely emptiness of the second best. After all, how can you compete with a memory? Claire Skinner, who plays both Nicola and Hepburn, brings a cool sophistication to the latter in an Act Two scene which is a flashback to the insect-infested jungle shoot of The African Queen. The set dissolves and we are in sub-Saharan Africa in 1950, with Cardiff playing cards with Humphrey Bogart (played by Kay) and chatting to a wryly cool Hepburn. It is a highpoint of wit and insight, enhanced by Ian William Galloway’s video design.

Back in the present, Prism explores Cardiff’s wandering mind in a scene in which Lucy allows him to photograph her, not realizing that he is re-running a phot shoot he did with Monroe some fifty years previously. Although Johnson rather unnecessarily gives Lucy a fraught backstory, Night performs convincingly as Lucy, Monroe and Bogie’s lover Betty, just as Kay takes his turn as Monroe’s one-time hubby Arthur Miller. At times, the play has flashes of Johnson at his dizzy best, full of sharp one-liners and sudden insights, but this time the plot is grounded in a sad valedictory feeling as old age and senility take centre stage.

As you’d expect, there are several visually entrancing moments, from the opening sight gag in which Cardiff explains the different aspect ratios of film history by gradually lifting the garage door, to the photographs that come alive and the shifting video background that shows how colour can drench a world, or fade away from it. Johnson’s love of cinema, so beautifully staged in his Hitchcock Blonde (2003), comes across again, and this time doesn’t overwhelm the emotional core of individual anguish. As Cardiff loses his sight, the terrible irony and horror of mental decay stills the laughter at the dark humour which Johnson specializes in, and which is a vital pert of the evening’s enjoyment.

Directed, as usual, by the playwright himself, Prism is a finely balanced work, full of the solemnity of its sadness as well as the hilarity of its jokes. Lindsay gives an excellent performance as Cardiff, a mixture of bruised charm and artistic fanaticism. He convincingly conveys his character’s obsession with reproducing different hues, and with making women look beautiful on screen. He also communicates not only the confusions of Alzheimer’s, but also the fragility of a man who realizes that life never has a cinematic story arc: as he says, “Submit your life to any decent script editor and they’d reject it on structure alone. A real life does not boast a satisfying story arc.” And “The time of our lives is not the finished masterpiece, it’s just whatever we’ve got in the can today.” Excellent support from Skinner, Night and Kay. This really is a beautiful piece of theatre.