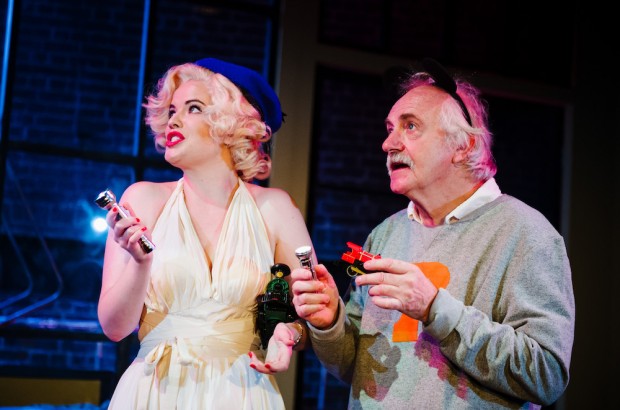 Imaginary meetings are a wonderfully theatrical conceit. Think of Tom Stoppard’s Travesties (James Joyce, Tristan Tzara and Lenin), Jeff Stetson’s The Meeting (Martin Luther King and Malcom X) or, going back, even Friedrich Schiller’s Mary Stuart (Elizabeth I and Mary Queen of Scots). Of course, among the market leaders in this genre is Terry Johnson, whose Hysteria (Sigmund Freud and Salvador Dali) is one of the truly classic plays of our age. His 1982 play, Insignificance, once a cult film by Nicolas Roeg and now being enjoyably revived by David Mercatali, features the meeting of four characters who are the spitting image of Albert Einstein, Marilyn Monroe, Joe McCarthy and Joe DiMaggio.

Set in a New York hotel room, in 1953, Johnson’s fantasy play imagines a white-haired and bright-eyed Professor whose preparations for the following day’s peace conference are interrupted by visits from the Senator, who wants to bring him in front of the House Un-American Activities Committee to see whether he has communist sympathies, and then from the Actress, who has just been filming the scene from The Seven Year Itch when a breeze from the subway grate on Lexington Avenue blows up her skirt. Escaping the gawping crowds, she befriends the Professor. Later, her husband, the Ballplayer, barges into the hotel — and makes a scene.

Johnson slyly subverts our clichéd views of all involved: the Actress is not just a dizzy blonde bombshell, but is clever enough — in the play’s most delightful scene — to explain the Special Theory of Relativity to the Professor, using a train set and, in this version, a pair of Mickey Mouse ears and two torches. Nor is the Professor an unworldly scientist, completely detached from politics or immune to amorous advances. He is all too human. The Senator is closer to type, being a big bully who is obsessed with a paranoid view of politics, while the Ballplayer turns out to have a surprisingly soft side. There are some sweet moments here.

Watching Mercatali’s revival, I was struck more forcefully than before by the gender politics of the play: the Actress dominates the story. As played by Alice Bailey Johnson, she is not only an intelligent woman who is heartily sick of men gawping at her, but also a witty individual whose line after she’s performed her demonstration of astro-physics — “Now you have to show me your legs” — rings unexpectedly true. As so often in history, it is she who ends up getting the most bruises, after a brutal moment that (given the Harvey Weinstein scandal) feels horribly contemporary. But she is at the core of the play, like a bright star that draws the men into her orbit, for better or for worse.

The Actress might be sick of celebrity, but the men are perhaps more ambivalent. The Professor enjoys the public’s attention, even if he also wants to be left alone with his equations; the Senator is riding high on popular political hysteria (what could be more relevant today?); while the Ballplayer is now retired and misses the roar of the crowd. He chews gum obsessively, checking that the baseball cards still feature his image. If Johnson shows how power embraces celebrity, and how celebrities suck up to power, he also outlines the costs to personal desire of this often fatal embrace.

By giving the characters names that just describe their jobs, and not calling them Einstein or Marilyn, the playwright suggests that fame is so enduring that we will recognise these people no matter what. However iconic, and who now remembers Joe DiMaggio?, these four celebrities belong in a world where people both long for celebrities, and want to bring them down. Amid all of Johnson’s bright one-liners and artful meditations on significance, insignificance and the right way to lead your life, there’s a feeling that our love for the famous will always end in misery.

Mercatali’s revival, designed by Max Dorey, takes a while to warm up, but he has a strong cast. Bailey Johnson — the playwright’s daughter — is central to this production and does an excellent job of impersonating our idea of Marilyn. She succeeds in conveying her emotions perfectly, although maybe a greater contrast between her stage persona and her private self would have been even more interesting. Simon Rouse’s Einstein is everyone’s cuddly uncle, and his calmness makes the play’s events seem more than usually surreal. Tom Mannion’s McCarthy is satisfyingly brutal, while Oliver Hembrough’s DiMaggio is convincingly dumb. Insignificance remains not only relevant, but also immensely good fun.