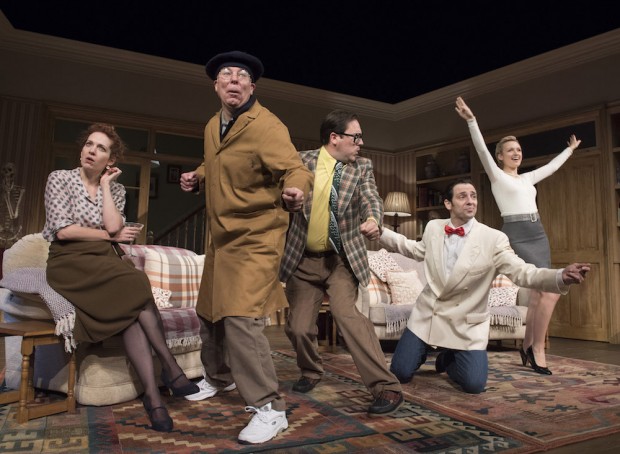 Why is comedy, in the words of the cliché, such a serious business? One reason is that what we laugh at says a lot about who we are as a nation; another is that the simple “joy of laughter” drowns out the anxieties of life’s little, and not so little, agonies. Both of these aspects of humour are examined in this cracking West End revival of Terry Johnson’s Dead Funny, his 1994 masterpiece which opens, nostalgically enough, with the Nat King Cole song: “Smile, though your heart is aching…”

Set in 1992, we are in Richard and Eleanor’s impeccably middle-class north London living room, and the heartache here is her desire, after 10 years of marriage, to have a baby (she is 39) and his revulsion from any kind of physical contact (he is a 36-year-old obstetrician). Having resorted to a sex therapist, Wednesday night has been designated love night, but just as Eleanor (Katherine Parkinson) strips Richard (Rufus Jones) naked and prepares to take him in hand, in bursts their nextdoor neighbour with the news that Benny Hill has died. As chairman of the Dead Comics Society, Richard must forget about his own member, and mobilise his club members.

These include Nick (Ralf Little), Richard’s best friend, Lisa (Emily Berrington), Nick’s wife, and 59-year-old campy Brian (Steve Pemberton), vice-chairman of the Dead Comics Society and the nextdoor neighbour. Fast and furiously farcical, with dozens of double entendre jokes and silly puns, the play rushes through uproarious coincidences and much compulsive clowning, cruelly exposing every character’s tender secrets: the real reasons for Richard’s “celibacy”, for Nick’s depression, for Lisa’s pregnancy, and for the sadness of Brian, are all revealed. By the end, all five characters have faced the truth about themselves, and been changed by it. And, as always, laughter has been used as a weapon in the sex war.

Johnson’s astonishing skill lies in using the conventions of slapstick to linger over the excruciating truths on which farce is based, but which it usually ignores. There are two, ahem, climaxes: in the first, Lisa acrobatically reveals her underwear; in the second, Eleanor loses her skirt to reveal basque and suspenders. In both moments, the audience’s laughter is a mixture of schadenfreude and temporary amnesia. We laugh but we can’t forget what we know about the awfulness of their terrible relationships — and especially what we understand about their emotionally retarded husbands. And Johnson’s sallies rarely miss their mark.

So although the play is a satire on English hobbyists, it is also a serious look at the more intimate recesses of personal politics. If Eleanor’s enduring love for her faithless husband is its sickest joke, the piece’s main aim is to remind us that laughter depends on repression: although sex is no longer taboo, the fact that some couples don’t fuck is still a bit of a secret. But while Johnson’s feminist critique of men’s tendency to use hectic joviality to hide their feelings is spot on, some of his assumptions about women are oddly conventional: Eleanor wants sex, not for pleasure, but to have a baby. And why must infidelity be mainly seen as a problem of male loyalty?

Perhaps the play’s sharpest tactic is to give Eleanor, who sees the Dead Comics Society as a childish hobby, all the best one-liners. “None of you,” she tells them, “would recognise a joke that didn’t have its trousers around its legs.” Richard, she points you, loves comedy but never laughs. All those silly voices and smutty puns are basically schoolboy humour — the Dead Comics Society is a nostalgic refuge from adulthood. Comedy, Johnson implies, may help you survive life, but its old routines can’t help you understand it.

At the heart of the play is that quintessentially English institution, the bizarre fan club. Middle class and middle brow, the Dead Comics Society worships the working-class tradition of stand up comedians, but only its dead exponents. Club members revive all the old routines, from Jimmy James (“Lions in the box”) to Morecambe and Wise (“Boom, ooh, ya-ta-ta-ta”), with additional quips from Hill, Hancock and Howerd. A joke lifted from Joe Orton (the promiscuous woman’s Y-shaped coffin) shows Johnson’s pick-and-mix approach, which enables him to both criticise and celebrate the Englishness of English comedy. Like so many of the nation’s institutions, the Dead Comics Society is represented as being in a state of decline.

The English, who have always prided themselves on their sense of humour, now come across as a deeply troubled people. Today’s fashionable cynicism contrasts with yesterday’s vaudeville innocence. Johnson’s loving re-enactment of the great sketches of the past encourages a nostalgia for a simpler age, when the land of the saucy postcard relished humour that paddled about in social embarrassment, sexual innuendo and the niceties of class distinction. Yet, as Eleanor’s one nasty joke about AIDS shows, Johnson knows all about the link between fun and brutality. Not to mention homophobia. And, he reminds us, the great comic tradition of macho double entendres was created by generations of gay comedians. But if yesterday’s wisecracks are a balm for today’s hurts, should we love or despise our comic heritage? Is it the comics or their followers that are essentially humourless?

This revival — directed by  Johnson (who also directed the first production) and designed by Richard Kent — is outstandingly entertaining, and watching it I was reminded that I think Dead Funny is one of the best plays of the 1990s, beating hands down any number of more widely hyped in-yer-face shockers. Like the same playwright’s hilarious Hysteria, there is a complexity and an edge to the writing that this cast capture effectively. Parkinson, with her husky voice and sulky demeanor, is perfect as Eleanor, while all the men show how male grown-ups cherish the child within. Berrington’s Lisa is likewise very good.

George Orwell’s idea that all laughter is subversive — “A dirty joke is a sort of mental rebellion” — now seems too simple to be true. It is much more likely that comedy is such a serious business because it is always escaping our conscious control. In the constant argument between the super-ego and the id, humour may tell us things about ourselves that we’d rather we didn’t know. At one point, Richard puts together an anatomical model and discovers that it doesn’t have a heart. It is a symbolic moment no one can misunderstand. We laugh at, and with, him. Comedy is paradoxically the only way of both facing the worst truths about life and of avoiding them.