Home » Blog » About The Kreutzer Sonata

About The Kreutzer Sonata 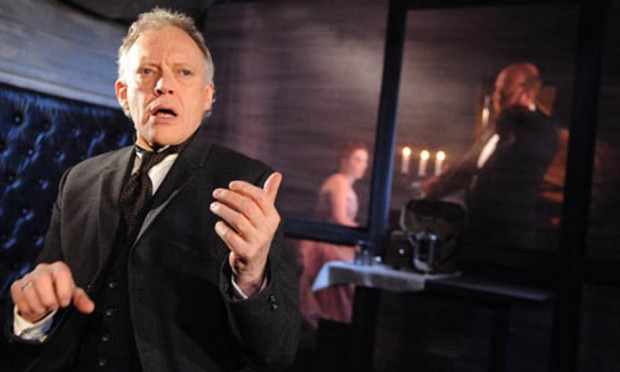 Last night, I was at the opening of The Kreutzer Sonata, adapted by Nancy Harris from the 1889 novella by Leo Tolstoy and directed by Natalie Abrahami at the Gate Theatre in London. Presented as a monologue, with Hilton McRae completely convincing as Pozdynyshev, a middle-aged Russian man, the experience was an intense and gripping one. It was not only an appallingly accurate depiction of masculine jealousy, but also a fascinating account of the erotic power of music. If Tolstoy’s message about the necessity for chastity got somewhat lost in translation, Abrahami’s excellent production (first seen at the same venue in 2009) did succeed in conveying the ambiguity of memory. While Pozdynyshev’s wife and the violinist Trukhachevski (Sophie Scott and Tobias Beer) played the music live on stage, they were positioned behind a screen so that they could fade in and fade out, while video projections enhanced the sense of a memory haunted by flashes of uncontrollable emotion. When Pozdynyshev suspects that his wife is having an affair, even his simple remembering of her sitting next to Trukhachevski gets a charge of jealousy as we glimpse his fantasy of the couple embracing. Harris’s adaptation does feel authentic as it sends us into the depths of Russia, as Pozdynyshev rides the trains endlessly, telling anyone who will listen the story of his lustful youth, his marriage to a beautiful young innocent and then his murder of her, inspired by his jealousy of her relationship with a music teacher. Acquitted by the courts for this crime of passion, he remains trapped inside his memories and his sexual guilt. Slowly, this ex-government official tells the terrible tale of how a nice middle-class marriage turned into violence and death. A powerful and fulfilling evening.