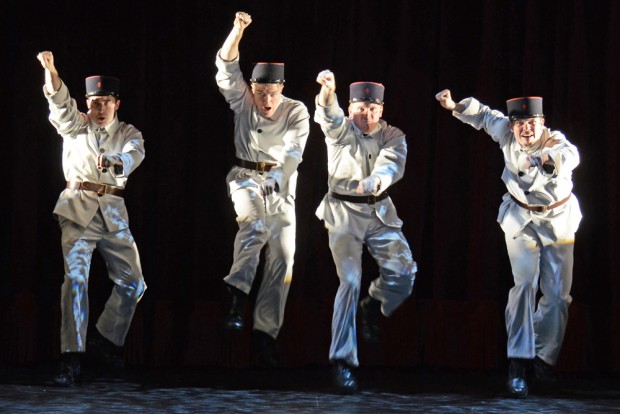 The trend of celebrating anniversaries by digging out old classics might suggest that no good new plays are being written, but at least it gives us the chance to re-assess their worth. Theatre Royal Stratford East, the legendary Joan Littlewood’s old venue, presents a new production of Oh What a Lovely War in its 60th anniversary year to coincide with the 100th anniversary of the First World War. This classic, first staged in 1963, is a powerful anti-war tract — but is there any more to it than a flamboyantly theatrical humanity?

The idea for the musical originally came from BBC producer Charles Chilton’s 1962 Armistice Day radio programme, called The Long Long Trail, which used the songs of British troops in the First World War to enliven a documentary whose statistics and reminiscences recreated the atmosphere of life in the trenches. And which took some satirical potshots against the generals and political leaders whose incompetence led to unnecessary deaths. Many of the songs were standard hymns or tunes from West End shows — but the lyrics were made up by the common soldiery.

The stage version was shaped by Littlewood and her Theatre Workshop company, and enjoyed a successful West End transfer, but was much less coherent in its later, and frankly embarrassing, filmic incarnation. The current stage version, directed by Terry Johnson and designed by Lez Brotherston, at first glance adds little to the original, which famously used the end-of-the pier Edwardian pierrot show to entertain the audience while attacking the rich and powerful who were responsible for the war.

The keynote is contrast: while the cast sing and dance energetically at the front of the stage, behind them an electronic ticker-tape board lists the casualties of disastrous battles and the gains made (usually “Nil”). At the same time, there are various projections of original photographs from the Great War, which give the evening a documentary feel. I must say that I found most of this rather too familiar and too redolent of a cheery kind of political theatre which no longer has much pull. In the 1960s, its point of view was radical: today it’s banal. It’s also outdated. In the 1960s, people knew what a pierrot show was: today they don’t.

Things are not helped by this version’s clumsy attempts at audience participation and the highly stereotypical representation of other European nations, complete with silly accents: compared to this, ’Allo, ’Allo is positively well rounded. Most of the acting and singing has a blatant theatricality which feels all wrong. Surely, the brilliant thing about the original production was that the songs had a hauntingly ordinary feel: they were sung by ordinary men and women. They were unadorned and unoperatic.

Occasionally, this production achieves this longed-for kind of emotional power: a lone voice heard across No Man’s Land sings “Stille Nacht”; British Tommies intone “We are Fred Karno’s Army” or simply “We’re here because we’re here because we’re here…”; a Belgian officer softly complains of his country being abandoned by the Allies. At other moments, a single shell blast reminds us of the shocks of war; nurses in bright red capes tend the injured; a leg sticks out of a mound of earth. And General Haig comes across, unfairly or not, as a rigid religious fanatic. He is the one we love to hate.

Yet at other times this staging is simply too fussy, too messy, too nostalgic: a kind of Downton Abbey on the Somme. Despite a solid ensemble cast led by Caroline Quentin and Michael Simkins, with music by Mike Dixon and choreography by Lynne Page, this production — like other revivals before it — ultimately fails to reimagine this classic for the present century. What it needs is a makeover, not a revival. Oh what a missed opportunity.