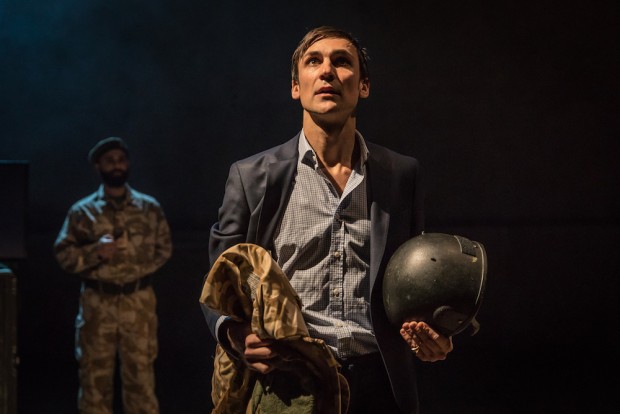 At a time when everyone is talking about globalization, when this is an issue in every election, plays about the international reach of European countries are still quite rare. So it’s great to be able to see two recent dramas that give some sense of how difficult it is to grasp the bigger picture in all its complexity. One is Alexandra Badea’s The Pulverised; the other is Stephen Brown’s Occupational Hazards. Both show us how the other half of the world struggles to survive.

Occupational Hazards is based on the memoir of the same name by Tory MP Rory Stewart, charismatic traveler, diplomat and currently a Minister at the Department for International Development. In the early 2000s, he made a name for himself by walking for two years across Asia and Afghanistan, and then by planting 400 trees in the Highlands of Scotland. In September 2003, after the fall of Saddam Hussein, he travels to the Middle East, exploits the old boy’s network and talks his way into serving as governor of Maysan province in southern Iraq. It is a place of Marsh Arabs and 99 per cent Shia Muslim. Stewart is just 30 years old.

Although it offers a highly simplified version of true events, Brown’s docudrama nevertheless sharply outlines the main tensions in Iraq following the invasion by American-led Coalition forces. While the American Ambassador Paul Bremer attempts to run things in Baghdad on behalf of President George W Bush, the question arises: how do you bring freedom and democracy to a country which was once a dictatorship? Very soon, Stewart finds himself involved in the local conflict between Karim Mahood, “Prince of the Marshes”, a tribal sheikh who once fought Saddam, and Seyyed Hassan, an Islamist preacher and leader of the Sadrist movement of militant Shias.

Set in al-Amarah, a city of some 300,000 people in southern Iraq, the play explores the conflicts between Karim and Seyyed, and how they affect Stewart’s attempts to set up a local council and elect an indigenous Iraqi governor of the province. At the same time, the occupying British army, led here by Major Ed Melotte of the Irish Guards attempts to keep the warring militias apart, while Rana Bashir — daughter of a university professor — tries to run a project to empower women to become independent by teaching them to use sewing machines.

The central problem is the paradox that the occupying forces extol democracy while being themselves unelected foreign occupiers. Likewise, the delusion that the Brits or the Americans know best what system of government is well suited to a culture they barely comprehend doesn’t survive for very long. Stewart has the advantage of much knowledge of Iraq, Afghanistan and other similar countries, but this doesn’t help him very much. He lacks real moral authority. Instead, he opts for “theatre” — using the illusion of power to reconcile conflicting forces.

The 100-minute play is studded with insights and memorable moments. Using black humour and paradox, it is great for politics buffs. In an atmosphere where every mishap is blamed on the Brits, a Muslim who cuts himself while saving his pubic hair naturally is angry with the “crusaders”. Kennedy’s saying “Ask not what your country can do for you…” is attributed by Saddam to Saddam. A 5000-year-old clay tablet that suggests how ancient civilisation is in this area turns out, humorously, to be about the ownership of 78 goats. Pontius Pilate’s question, “What is truth?”, is aptly invoked.

But, at the same time, there is an empty space at the centre of the play: we learn almost nothing about Stewart himself. What makes him tick? Why does he care about Iraq? Who is closest to his heart? Given that many incidents that are shown are horrific in their intensity, it is sad that we don’t find out how this terrible slaughter affected him. Also, since the Iraq debacle is a notable failure, it must have felt extremely depressing to be part of it. But we never discover how that actually felt.

Despite this, Simon Godwin’s production, designed by Paul Wills, is fast-moving, full of flashing lights and pounding drums and quick set changes. Henry Lloyd-Hughes ably conveys Stewart’s charm and frustration, and his direct address to the audience helps both to solicit our sympathy and to lead us through the Iraqi labyrinth, while Silas Carson (Karim), Johndeep More (Seyyed), Aiysha Hart (Rana), John Mackay (colonel) and Vincent Ebrahim (professor) provide good support. Although the play never has time to go deep enough into the situation it describes, it is occasionally moving and shows how Western illusions cannot survive the chaotic reality of real politics.