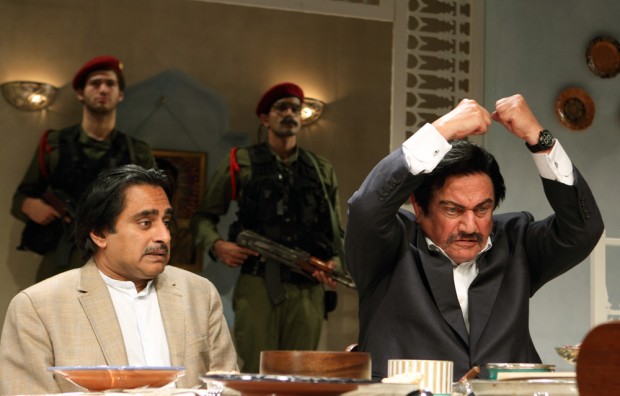 Writer Anthony Horowitz is a busy man. Not only has he written more than 40 books, but also worked in many media. One year, he’s penning another series of the ever-popular Foyle’s War; the next he’s reviving the world of Sherlock Holmes in novels such as Moriarty; then it’s onto James Bond with Trigger Mortis. Now he casts his eagle eye on Saddam Hussein and shows how the blood-thirsty Iraqi dictator, who was paranoid about being assassinated, used to call in at the homes of private citizens, asking to eat and to stay. So what’s it like when the most powerful bully in the country rings your doorbell?

As played by theatre legend Steven Berkoff, here almost unrecognisable, Saddam is a lumbering and sinister presence whose arrival in this farcical comedy is teasingly delayed. Instead we are first introduced to his victim Ahmed Alawai (the energetic and charismatic Sanjeev Bhaskar). Ahmed works as the supervisor of the construction of a local mosque and lives in Baghdad with his wife Samira. Although the date is 19 March 2003, he’s so blinkered that — despite her insistence that the family leave the city — he cannot see that the United States are just about to subject the place to a horrific dose of shock and awe.

Instead, the ineffectual Ahmed is trying to make sure that Rana, his daughter, will marry Jammal, a traffic cop who belongs to the right Sunni family and the right tribe. But Rana has a mind of her own and she prefers Sayid, an actor from the Shia side of town. Yes, it’s very Romeo and Juliet! They meet as Sayid gains access to the family home on the pretext of being a plumber. This being a farce, objects are as important as characters. You’d be advised to keep an eye on two of them: the first is a jar of rat poison which is labelled “mixed spice”; the second, an anti-Saddam political tract, written by the subversive Al-Nahda, or the Awakening. Anyone caught possessing this will of course be immediately executed.

When Colonel Farouk, Saddam’s one-eyed chief of Security, arrives to make the house safe for the arrival of the dictator, these two objects become hand grenades that are ready to explode. By the time that Saddam himself crosses the threshold, the plot is cooking, and Horowitz’s writing is sparkling like the waters of the Tigris river or the flaring sunlight on the golden minarets of the Baghdad mosques. But what starts off as a likeable farce about an old father and mother, and their plans for an arranged marriage for their daughter, ends up as a rather didactic political tract.

In a long programme note, Horowitz complains that “we have allowed the Iraq war to become boring” and notes that he using this comedy “as a weapon to attack the sheer fatigue that now surrounds the issues”. But instead of laying into President Bush and Prime Minister Blair, he paints a portrait of Saddam as a rather ridiculous monster, darkly joking about the numbers of people he has killed. As a satire on the old regime this is much less funny than the turd jokes, the fart jokes and the toilet humour. And it’s redundant. Didn’t we all know that the British supported Saddam with weapons, chemicals and materials for decades before he invaded Kuwait?

So in the last part of the play a chill falls over the stage as Berkoff delivers the piece’s political message, and the laughs dry up. Compared to the nimble speed of Bhaskar, whose body contorts and whose face bulges hilariously with the tension of hosting his beloved leader, Berkoff is rather unwieldy as Saddam, offering an extraordinarily cartoon-like performance, full of stylized gestures and night-black eyebrows. Lindsay Posner directs with his usual efficiency on Tim Shortall’s set, and there are agreeable moments from Shobu Kapoor (Samira), Rebecca Grant (Rana) and Ilan Goodman (Sayid). Nathan Amzi is a wonderfully greasy (and farty) Jammal. But even the revelation that the Iraqi tyrant’s favourite tipple was Mateus Rosé is not enough to blind me, or anyone else, to the piece’s considerable shortcomings.