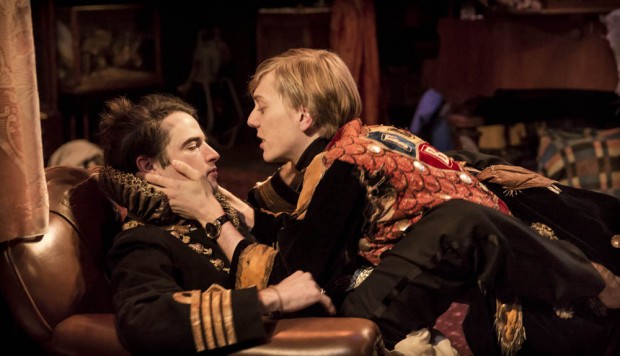 Most of us would love to live in a happy family, but it’s the unhappy ones that make the most compelling drama. And few playwrights do familial tensions as instinctively as Polly Stenham, whose highly successful 2007 debut That Face and 2009 follow-up Tusk Tusk both explored the tensions between parents and children. In her new play, she revisits the mother-son relationship, and adds some thrilling twists to the bubbling brew.

In the Royal Court’s dark and claustrophobic Theatre Upstairs the set makes an immediate statement. We are in the living room of a ramshackle manor house which is spectacularly untidy and breathtakingly cluttered, a Pandora’s box of brocade, antlers, antique portraits, suits of armour, trays of silverware, battered trunks, stuffed birds, grandfather clocks, old candlesticks, gloomy candlelabras, tatty volumes, odd ornaments, and ladders — and that’s just one wall.

In the opening scene, we meet Lily (the excellent Maureen Beattie) and Robin, mother and 20-something son. She is very sick, with creeping dementia, and has — with his help — escaped from a medical establishment. A drop-out musician, he is a stoner whose drug abuse matches that of his mother’s random medications. In her less lucid moments, she mistakes him for her husband, who has been dead for more than two decades. They see each other as kindred wild spirits, far from the norms of society.

But Stenham doesn’t linger very long over the dirty laundry of this mildly incestuous relationship. Soon Lily has gone, and the “landed gypsy” Robin is holding court. With a youthful bravado which reminded me of Rooster Byron in Jez Butterworth’s seminal Jerusalem, he has brought home Tommy, a young ex-squaddie and dealer, and the night is rapidly descending into one unholy binge. Sharing the chemicals are some late arrivals — notably the supercilious twins Arlo and Scout — while local girl Coby (barely 14 years old) threatens to disgrace herself. It’s all very libertine, and an air of Babyshambles pervades the scene.

As the party gathers pace, Stenham’s text runs through the system like the vicious cocktail surreptitiously mixed by Robin. It rings with a rare punkish, puckish spirit expressed in phrases such as “I would punch a baby for a cigarette”, or the comment that whisky tastes of tweed. Class is expressed through the metaphor of taking a shit. There’s an astringent taste in the larkiness, and the jokes make you gasp as well as laugh. It’s young, it’s cool and it’s slightly crazy. As the soundtrack reminds us, sweet dreams are made of this.

At the same time, there’s a sharp note of social criticism here. Robin hates the life of the city and loves the wild freedoms of the countryside. Appalled by, and alienated from, our current culture that prefers information to knowledge, he is a posh boy with the cloak of a rebel. But is his ethical stance against mobile phones, soulless conformity and the mortgage-paying public a genuine critique, or just the pose of someone who can’t face reality?

Add to the mix Oliver, Robin’s older brother (a successful politician), and the family drama stumbles — after a thrillingly wild night in which everyone gets off their faces — into the harsh reality of the morning after, when enough skeletons come crashing out of the cupboards to populate the local churchyard. With its open class antagonism, embrace of hedonism and bohemian atmosphere, this is a superbly observed and highly contemporary piece of work.

But despite Tom Scutt’s wonderful set, Jeremy Herrin’s moody production suffers from some lapses of concentration, perhaps because the youthful cast is not experienced enough to soar over the lacklustre bits of the story. As Robin, Tom Sturridge could have done with an injection of charisma, while Taron Egerton as Tommy, Joshua James as Arlo and Zoe Boyle as Scout all seem a bit underpowered. Still, at its best, No Quarter just about manages to rip off its T-shirt and expose the chaos, pain and danger of all intimate relationships.