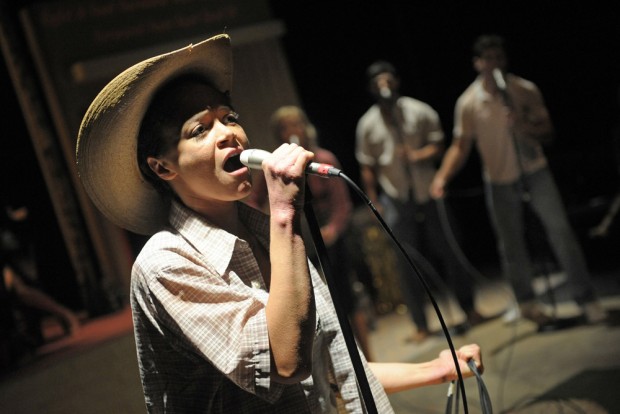 One of the promises that artistic director Nicholas Hytner made when he took the helm of this flagship 10 years ago was to stage new and innovative musicals. His problem, of course, is that these don’t grow on trees. So after the triumph of Jerry Springer: The Opera in 2003, we had to wait eight years for London Road, the venue’s next British hit. In the meantime, the United States has occasionally plugged the gap — and now provides this current musical, in the shape of a critique of American capitalism by New York’s the TEAM.

First seen here in 2011, at Edinburgh, Mission Drift is about the pioneer spirit and how Dutch immigrants Joris and Catalina conquer the West, and then settle in the inhospitable Nevada desert. Their epic journey ends in Las Vegas, where their story becomes entwined with that of Joan and Chris, two ordinary people ruined by the financial crisis of 2008. Spanning five centuries, this mythic tale is narrated by Miss Atomic, a husky, sultry and silky nightclub singer.

The first thing to say is that Las Vegas is a fascinating subject. As well as a dreamlike place of casinos and hotels, it is a symbol of the American Nightmare. At the turn of the new millennium is was the fastest growing city in the States, then everything ground to a sickening halt when the crisis hit. Roughly a third of houses in the new neighbourhoods were repossessed. Huge building projects were abandoned. Capitalism itself had run into the sands.

In Mission Drift, we follow Joris and Catalina from their arrival in New Amsterdam (New York) in 1624, then watch as generations of their offspring conquer the frontier, which always holds out the promise of an empty land waiting to be exploited. In the present, however, this dream of endless wealth turns to dust in the financial crash and one of the best scenes of the evening is set in the Neon Boneyard, an eerie museum of defunct signs from closed hotels.

Much as I was blown away by the sheer ambition and imaginative scale of this musical, I pretty soon discovered that I was immune to its charms. There’s too much narrative, not enough character; too much chat, not enough good lines. The songs are okay but rarely electric; the dancing is rough and ready. Nothing really gripped me. Unlike Bruce Norris’s The Low Road, which wore its politics like a flamboyant cloak, Mission Drift seems unfocused in its analysis and message. Surely American capitalism isn’t just a matter of big bangs and shouting?

To me, the directing (by TEAM supremo Rachel Chavkin) is messy, the music (by Heather Christian) is too slack, the text (by the company) meanders and the acting is cheery, but inconsequential. Okay, the cast — Libby King (Catalina), Brian Hastert (Joris), Amber Gray (Joan) and Ian Lassiter (Chris) — are attractive and hardworking, but the material is spread thin. Despite Heather Christian’s evocative piano playing and considerable stage presence as Miss Atomic, this is not a show for me. It all feels too long and too vague. As its title says, it drifts.