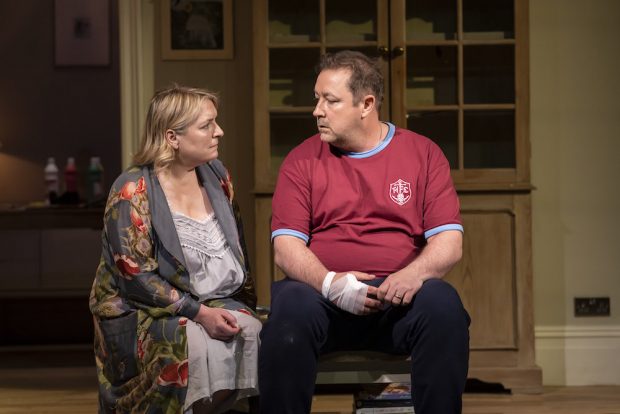 The traditional, and much derided, well-made play is meant to have a beginning, middle and end. Although playwright David Eldridge often writes in opposition to these outdate forms, his trilogy about relationships, which started in 2017 with the hit show Beginning, now reaches its second part with Middle, which opened tonight at the National Theatre. No prizes for guessing what the final part will be called. Like its predecessor, this two-hander is directed by Polly Findlay, and this time stars Claire Rushbrook and Daniel Ryan, but how does it compare to Beginning?

At first we are in familiar territory. Set in Shenfield rather than Crouch End, this time at about 4am, in a large and rather antiseptic kitchen, the married couple are both different from, and similar to, the unsuitable pair of the first play. Maggie is a 49-year-old middle-class office worker, who has returned to work after five years of bringing up eight-year-old Annabelle, while her husband Gary is a working-class City boy who earns a lot, but is never at home. Both are lonely, both have drifted apart, but this long night is showdown time. So when Gary finds Maggie warming up some milk in the middle of the night, he asks her, “What’s wrong?”

His wife tells him that she doesn’t love him any more, but although she is desperate to talk, he is evasive. Okay, he talks, but about nothing that’s relevant, an example of committed avoidance. But he can’t keep up this passive aggression for long, and soon the couple settle down to talk about their 13-year marriage. Like any relationship, this one has had its problems. Before conceiving, Maggie has had miscarriages and IVF treatment, and has experienced motherhood as a lonely strain; by contrast, after blaming her mood on the menopause, Gary complains that he has always wanted a bigger family. As usual, sexual desire is the gristle in the stew.

As thumbnail sketches go, this contrast — woman connected to her feelings; man emotionally illiterate — can only get you so far. While Gary’s compulsive need to banter soon gets frustrating, he sudden switch into maturity feels a bit unconvincing as the stakes gradually, and slightly, increase. But it’s typical of the tonal uncertainty of Eldridge’s writing here. With its set pieces, such as Maggie’s long monologue about her disappointment as an 18-year-old birthday girl, and the liberal sprinkling of local references (there are place names, street names, town names, as well as film names, book names and recipes) there is a humorous tone that feels quite wrong for the seriousness of the play’s central theme: the grapple to save a marriage.

Looking through the playtext, and seeing the many changes that have been made between the printed draft and the one used on stage, it is obvious that Eldridge has struggled to get some kind of coherence into the play. At its heart, however, is the character of Gary the Essex boy — and he is a problem. On press night, he provoked a lot of laughs, which was a very uncomfortable experience. Were the audience guffawing at him because of the tension in the play, or just ridiculing this silly working-class man? Like some of the work of Mike Leigh, you’re never quite sure if this is meant to be satire or emotional truth.

On the other hand, at a time when so much post-pandemic theatre is comfort theatre, shows with a blatant feelgood factor, it is good to see a play that engages with the deep problems of a marriage. The subjects covered include the death of love, non-communication and loneliness in relationships, the difficulties of conceiving a child and the hard truth about being a full-time mum with not enough help. One of the best interactions is when the couple disagree about how to bring up their daughter. Both Maggie and Gary are unfulfilled in their family life, their work and in their social life — there is no balance between pleasure and graft. If there is something very conservative about their desire to simply be a normal family, without tense relationships with their in-laws, this is likewise very human.

But although there are passages of palpable pain, especially in Maggie’s account of her life, the representation of Gary the City boy feels too uneven — and often too humorous. This makes the 100-minute play too funny to be tragic, too erratic to be compelling and too uncertain to be truly raw. Despite this, however, Findlay’s production, perfectly designed by Fly Davis, is for the most part lovingly detailed and her actors — Claire Rushbrook and Daniel Ryan — often connect to the bleak emotions of their all-too recognizable situation. When they talk about honesty it’s a powerful blow; when they articulate their emotions they colour them expressively with their gestures. But compared to Beginning, Middle is a bit of a muddle.